Don Hollenbeck (March 30, 1905 – June 22, 1954) was a CBS newscaster and commentator and colleague of Edward R. Murrow and Fred W. Friendly. He died from natural gas inhalation as it was discovered that his stove and oven had been turned on but not lit (allowing gas to fill his apartment). Consequently, Hollenbeck's death was ruled a suicide. Reasons that it might have been suicide included health problems, a broken marriage, and frequent published attacks by Jack O'Brian, a Hearst columnist and supporter of Joseph McCarthy.

Hollenbeck was born in Lincoln, Nebraska, and began reporting the news while at the University of Nebraska. His first assignment was to the Nebraska State Journal in 1926. During World War II, he was assigned to the foreign staff of NBC in London in March 1943. From there he went to Algiers just in time to take a place with the British troops landing at Salerno, Italy in September. He went in with the second wave — the assault wave which took the full force of German shells, and later made a number of battle-action recordings which were broadcast to the United States.

During the conquest of southern Italy, Hollenbeck moved northward with the troops and was one of the first correspondents to begin broadcasting from Naples when the Army Signal Corps set up transmitters for the correspondents. But at Salerno he was stricken with malaria, then with jaundice and ordered back home.

The first big event for me in covering the news over there was at Salerno, just south of the town. I'll never forget it! We were on a headquarters ship and had put the commanding officer ashore, then for a while feared we couldn't get the rest of the people off. We were under heavy fire, so had to back off and spend that morning shuttling back and forth in the bay with German aircraft overhead and German '88' guns on shore, and behind us our own destroyers and cruisers bombarding the shore positions, so it was not a very pleasant cruise we had around the gulf of Salerno... I had a wire recorder with me and was on top of the landing craft trying to make some records at the time.

Asked what kind of protection there was after these forces had landed, Hollenbeck replied:

You hope there is air cover. We had difficulty that way because our forces were based in Sicily. They had to fly all the way, and it didn't give them very much gas to spend over our heads. We looked for those planes most of the time.

Don Hollenbeck of NBC sent back from Italy one of the most dramatic recordings we've ever heard. Against a backdrop of gunfire Don gave a vivid description of the bitter battle raging about him as he stood on the shore with microphone in hand and a portable recorder on his back. Interviews with the boys engaged in the fight were outstanding. A wire recorder was used for this broadcast from the beach at Salerno. On the hair-fine thread of steel wound on that small spool every sound of battle was inscribed, then relayed to Algiers and short-waved to the United States on September 17. In such fashion history is chronicled today with complete fidelity even while in the making, and that in itself is history.

Don Hollenbeck was at one time employed by the newspaper PM (Picture Magazine). Founded in 1940 by department store magnate Marshall Field III and published in New York, PM was a left-leaning newspaper, and it garnered accusations of being sympathetic to Communism even though it was critical of the Soviet Union for the Molotov-Ribbentrop Pact and of the American Communist Party for supporting it.

The newspaper published work by authors such as Ernest Hemingway and Erskine Caldwell, photographers like Weegee and Margaret Bourke-White, and cartoonists like Dr. Seuss, Crockett Johnson and Walt Kelly. It accepted no advertising, and dedicated itself to preventing "the little guy from being pushed around."[citation needed] It ended up becoming a target for anti-communists, and subsequently it went out of business in 1948. Because of this affiliation, Hollenbeck was a target for McCarthy-supporting columnist Jack O'Brian, whose attacks appeared in the New York Journal American and other newspapers in the Hearst newspaper chain.

Hollenbeck also worked for the Office of War Information (OWI), NBC and ABC, once subbing on short notice for Orson Welles over Welles' scheduled Sunday night ABC news commentary program[1], before joining CBS in 1946. Murrow eventually had Hollenbeck do the innovative media-review program, CBS Views the Press, over the radio network's flagship station, WCBS. In the early 1950s, Hollenbeck worked both for CBS Television and flagship WCBS-TV.

The first newsman WCBS-TV viewers saw after Murrow's March 9, 1954 documentary on Joe McCarthy was Hollenbeck, who told the viewers he wanted "to associate myself with what Ed Murrow has just said, and say I have never been prouder of CBS." That prompted O'Brian in the Hearst newspapers (including the flagship Journal-American) to step up his criticism of CBS and especially of Hollenbeck, who, despite his news experience under pressure situations, was a sensitive man.

On June 22, 1954, the 49-year-old Hollenbeck committed suicide by gas in his Manhattan apartment.[2] A newspaper account reported:

He had been in ill health. Clad in shorts and bathrobe, he was found lying on the kitchen floor. All burners on the gas stove were open. The assistant medical examiner pronounced the death a suicide. Hollenbeck's agent said he had been suffering from a bleeding ulcer. Hollenbeck’s body was discovered at about 11 a.m. after another tenant smelled gas and notified management. Hollenbeck lived alone. His wife, Angelique, maintained a separate residence with the couple's daughter, Zoe, 9. They were married in 1941.[citation needed] 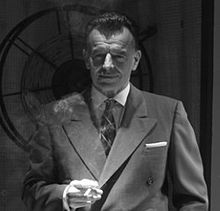 Don Hollenbeck was played by Harry Ditson in the 1986 HBO original production Murrow. He was later played by Ray Wise in the 2005 motion picture Good Night, and Good Luck, which was centered around Murrow and CBS News in their 1950s campaign against McCarthy. One of the film's sub-plots included Hollenbeck's suicide following continued printed attacks by Jack O'Brian. He was portrayed through the film as a broken man, as a result of his wife leaving him and the allegations by O'Brian that he was a "pinko" communist-sympathizer who deliberately biased his news reports. The movie shows Hollenbeck's suicide closely following Edward Murrow's April rebuttal to McCarthy, but the two events were in reality separated by two months; in the film's commentary track on the DVD release, director George Clooney said that this was done for dramatic reasons.