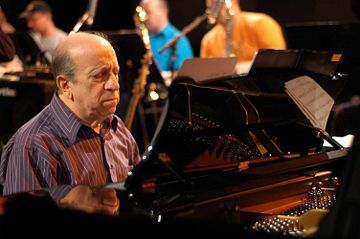 Martial Solal in 2006, with his Newdecaband

Solal was the son of an opera singer and piano teacher, who learned the instrument from the age of six. After settling in Paris in 1950, he soon began working with leading musicians including Django Reinhardt and expatriates from the United States like Sidney Bechet and Don Byas. He formed a quartet (occasionally also leading a big band) in the late 1950s, although he had been recording as a leader since 1953. Solal then began composing film music, eventually providing over twenty scores.[1]

In 1963 he made a much admired appearance at the Newport Jazz Festival in Rhode Island; the Newport '63 album purporting to be a recording of this gig is actually a studio recreation. At this time, his regular trio featured bassist Guy Pedersen and drummer Daniel Humair. From 1968 he regularly performed and recorded with Lee Konitz in Europe and the United States of America. 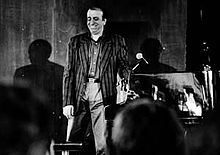 In recent years, Martial Solal has continued to perform and record with his trio. Throughout his career he has performed solo, and during 1993-94 he gave thirty solo concerts for French Radio, a selection of performances from which were subsequently released in a 2-CD set Improvise Pour Musique France by JMS Records.

Recently, the Gruppen review published in its issue of January 2011 an exceptional "Interview" of a dozen pages in which Martial Solal returns on his work as eternal "researcher in jazz. "