Gas-discharge lamps are a family of artificial light sources that generate light by sending an electrical discharge through an ionized gas, i.e. a plasma. The character of the gas discharge critically depends on the frequency or modulation of the current: see the entry on a frequency classification of plasmas. Typically, such lamps use a noble gas (argon, neon, krypton and xenon) or a mixture of these gases. Most lamps are filled with additional materials, like mercury, sodium, and/or metal halides. In operation the gas is ionized, and free electrons, accelerated by the electrical field in the tube, collide with gas and metal atoms. Some electrons in the atomic orbitals of these atoms are excited by these collisions to a higher energy state. When the excited atom falls back to a lower energy state, it emits a photon of a characteristic energy, resulting in infrared, visible light, or ultraviolet radiation. Some lamps will convert the ultraviolet radiation to visible light with a fluorescent coating on the inside of the lamp's glass surface. The fluorescent lamp is perhaps the best known gas-discharge lamp.

Gas-discharge lamps offer long life and high efficiency, but are more complicated to manufacture, and they require electronics to provide the correct current flow through the gas.

The history of gas-discharge lamps began in 1675 when French astronomer Jean-Felix Picard observed that the empty space in his mercury barometer glowed as the mercury jiggled while he was carrying the barometer.[1] Investigators, including Francis Hauksbee, tried to determine the cause of the phenomenon. Hauksbee first demonstrated a gas-discharge lamp in 1705. He showed that an evacuated or partially evacuated glass globe, in which he placed a small amount of mercury, while charged by static electricity could produce a light bright enough to read by. The phenomenon of electric arc was first described by Vasily V. Petrov, a Russian scientist, in 1802; Sir Humphry Davy demonstrated in the same year the electric arc at the Royal Institution of Great Britain. Since then, discharge light sources have been researched because they create light from electricity considerably more efficiently than incandescent light bulbs.

Later it was discovered that the arc discharge could be optimized by using an inert gas instead of air as a medium. Therefore noble gases neon, argon, krypton or xenon were used, as well as carbon dioxide historically.

One hundred years of research later led to lamps without electrodes which are instead energized by microwave or radio frequency sources. In addition, light sources of much lower output have been created, extending the applications of discharge lighting to home or indoor use.

Each gas, depending on its atomic structure emits certain wavelengths which translates in different colors of the lamp. As a way of evaluating the ability of a light source to reproduce the colors of various objects being lit by the source, the International Commission on Illumination (CIE) introduced the color rendering index. Some gas-discharge lamps have a relatively low CRI, which means colors they illuminate appear substantially different than they do under sunlight or other high-CRI illumination. 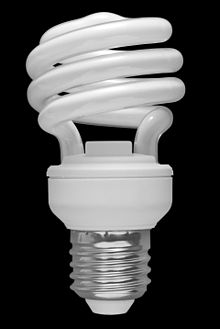 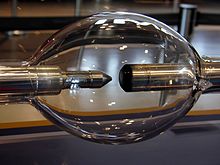 A high-intensity discharge (HID) lamp is a type of electrical lamp which produces light by means of an electric arc between tungsten electrodes housed inside a translucent or transparent fused quartz or fused alumina arc tube. Compared to other lamp types, relatively high arc power exists for the arc length. Examples of HID lamps include:

HID lamps are typically used when high levels of light over large areas are required, and when energy efficiency and/or light intensity are desired.