Barney and Friends, also referred to by HiT Entertainment as Barney the Friendly Dinosaur, is an independent children's television show produced in the United States, aimed at children from ages 1-8. The series, which first aired in 1992, features the title character Barney, a purple anthropomorphic Tyrannosaurus rex who conveys learning through songs and small dance routines with a friendly, optimistic attitude.[4][5][6][7] 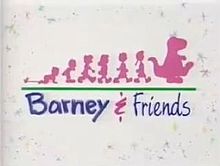 Barney was created in 1987 by Sheryl Leach of Dallas, Texas.[9] She came up with the idea for the program while considering TV shows that she felt would be educational and appeal to her son. Leach then brought together a team who created a series of home videos, Barney and the Backyard Gang, which also starred actress Sandy Duncan in the first three videos.[10] Later, Barney was joined by the characters Baby Bop, B.J., and Riff.

Although the original videos were only a modest success outside of Texas, Barney became a major success only when the character and format were revamped for the television series and were picked up by the Public Broadcasting Service (PBS), debuting as Barney and Friends in 1992.[11] The series was produced by Lyrick Studios (bought by HIT Entertainment) and Connecticut Public Television.[12] For several years, the show was taped at the Color Dynamics Studios facility at Greenville Avenue & Bethany Drive in Allen, after which it moved to The Studios at Las Colinas in Dallas, Texas. Currently, the series is produced in Carrollton, Texas, a suburb of Dallas. The TV series and videos are currently distributed by HiT Entertainment and Lionsgate, while the TV series has been produced by WNET since 2006. Sheryl Leach left the show in 2002 after HiT Entertainment bought Lyrick Studios.

The series opens with the theme song (complete with clips from various episodes) and the title card before it dissolves into the school. The children are seen doing an activity, occasionally relating to the episode's topic. The children imagine something and Barney comes to life from a plush doll, transforming into the "real" Barney, how he appears to the children while they're imagining.

Here, the main plot of the episode takes place. Barney and the children learn about the main topic of the episode, with Baby Bop, B.J., or Riff appearing during the episode and numerous songs themed relating to the subject featured in the series. The roles of Baby Bop, B.J., and Riff have grown larger in later seasons and later episodes venture outside of the school to other places within the neighborhood and to other countries around the world in Season 13.

Barney closes up with "I Love You" before he dissolves back into his original stuffed form. After the children discuss a bit about what they had learned, the sequence cuts to Barney Says where Barney, who is off-screen, narrates what he and his friends had done that day, along with still snapshots from the episode. Then Barney, himself, signs off before the credits roll. In Seasons 3-8, and 12, he later appeared on-screen by saying, "And remember, I love you." After he does that, he waves goodbye.

Although the show has been criticized for its lack of educational value,[13] Yale researchers Dorothy and Jerome Singer have concluded that episodes contain a great deal of age-appropriate educational material, calling the program a "model of what preschool television should be."[14]

One specific criticism is:

"His shows do not assist children in learning to deal with negative feelings and emotions. As one commentator puts it, the real danger from Barney is 'denial: the refusal to recognize the existence of unpleasant realities. For along with his steady diet of giggles and unconditional love, Barney offers our children a one-dimensional world where everyone must be happy and everything must be resolved right away.'"[15]

Barney
The main character is a purple and green Tyrannosaurus Rex in stuffed animal likeness, who comes to life through a child's imagination. His theme song is "Barney Is a Dinosaur," which is sung to the tune of "Yankee Doodle". Barney often quotes things as being "Super dee-duper". Episodes frequently end with the song "I Love You", sung to the tune of "This Old Man", which happens to be Barney's favorite song.[citation needed] Despite being a carnivorous type dinosaur, Barney likes many different foods such as fruits and vegetables, but his main favorite is a peanut butter and jelly sandwich with a glass of milk. He also loves marching bands and parades[citation needed].

Baby Bop
A three-year-old green Triceratops[citation needed]. Baby Bop has been on the show since July 29, 1991, she debuted in the video "Barney In Concert". She wears a pink bow and pink ballet slippers, and carries a yellow security blanket. She sings the song "My Yellow Blankey" to show how much her security blanket means to her. She likes to eat macaroni and cheese and pizza[citation needed]. She is B.J.'s little sister.

B.J.
A seven-year-old yellow Protoceratops[citation needed], B.J. has been on the show since September 27, 1993. He is Baby Bop's older brother. His theme song is "B.J.'s Song". He wears a red baseball cap and red sneakers. He lost his hat in the episode "Hats Off to B.J.!", and sometimes says things to hide his fears (for example, in the episode "Barney's Halloween Party", he was shocked by the paper spiders and after learning they were fake, he said "I knew that, sort of"). Pickles are his favorite food and because of that, he actually has had them in different ways like pickles (also with pepperoni, peppers, pineapple, and peanut butter) on a pizza.[17]

Riff
An orange six-year-old[citation needed] Hadrosaur, who is Baby Bop and B.J.'s cousin. He wears green sneakers. His theme music is "I Hear Music Everywhere." Riff loves music and it is in almost everything he does. In the episode "Barney: Let's Go to the Firehouse", it was revealed that Riff also likes to invent things; he created a four-sound smoke detector (the first three were different alarm sounds and the final one his own voice). He is shown to have an interest in marching bands and parades.[citation needed]

The adults on the show appear as teachers, storytellers, or other characters.

Main article: List of Barney and Friends episodes and videos

Besides the United States, the TV show has aired in Canada, Mexico and Latin America, France, Ireland, Italy, Malaysia, Spain, the United Kingdom, Japan (On English-based DVDs under the name "Let's Play with Barney in English! (バーニーと英語であそぼう！, Bānī to Eigo de asobō!?)" and on television as simply "Barney & Friends (バーニー&フレンズ, Bānī ando Furenzu!?)" ), the Philippines, Turkey, Australia, and New Zealand, among others. Two known co-productions of Barney & Friends have been produced outside of the US. The Israeli co-production (החברים של ברני Hachaverim shel Barney (The Friends of Barney)) produced from 1997–1999 in Tel Aviv, Israel, was the first of these. Rather than dubbing the original American episodes from Seasons 1–3, the episodes are adapted with a unique set and exclusive child actors.[18] The other co-production was one shot in South Korea from 2001–2003, airing on KBS (under the name "바니와 친구들" (Baniwa Chingudeul (Barney and Friends))). This one, however, adapted the first six seasons (including the first three that the Israel co-production did). It was done in a similar manner as the Israel production.

A majority of the albums of Barney & Friends feature Bob West's voice as the voice of Barney, however the recent album The Land of Make-Believe has Dean Wendt's voice.

Barney's song "I Love You" (as well as songs from Sesame Street and Metallica) has been used by interrogators at Guantanamo Bay, Cuba to coerce the detainees.[19]