The Manti-La Sal National Forest covers 1,270,646 acres (5,142.1 km2)[1] and is located in the central and southeastern parts of the U.S. state of Utah and the extreme western part of Colorado. The forest is divided into three districts: the La Sal District at Moab in the La Sal Range near Moab, in the La Sal District at Monticello in the Abajo Mountains west of Monticello, and the Manti Division on the Wasatch Plateau west of Price.[2] The maximum elevation is Mount Peale in the La Sal Mountains, reaching 12,721 feet (3,877 m) above sea level. The La Sal's are the second highest mountain range in Utah after the Uintas.

The La Sal Mountain loop road leads from Castle Valley to Geyser Pass and back down to Moab. Scenic Oowah Lake can be found within the forest. 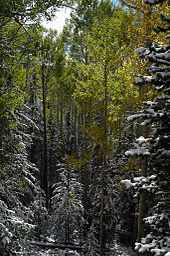 In descending order of land area, the forest is located in parts of San Juan, Sanpete, Emery, Utah, Grand, Carbon, and Sevier counties in Utah, as well as Montrose, and Mesa counties in Colorado. Only about 2.1% of the forest lies in Colorado.) Forest headquarters is located in Price, Utah. There are local ranger district offices in Ephraim, Ferron, Moab, Monticello, and Price.[3]

Manti La Sal National Forest is very popular for recreation. The northern district on the Wasatch Plateau is well known for the Skyline Drive, an unpaved road tracing along the backbone of the plateau. There is also an extensive ATV trail system in the forest there. The Moab District in the La Sal Mountains contains excellent hiking, as well as spectacular views over the desert regions of Canyonlands National Park and Arches National Park. The Monticello District is home the Manti La Sal National Forest's only wilderness area, the Dark Canyon Wilderness, a vast, remote canyon area. [5]