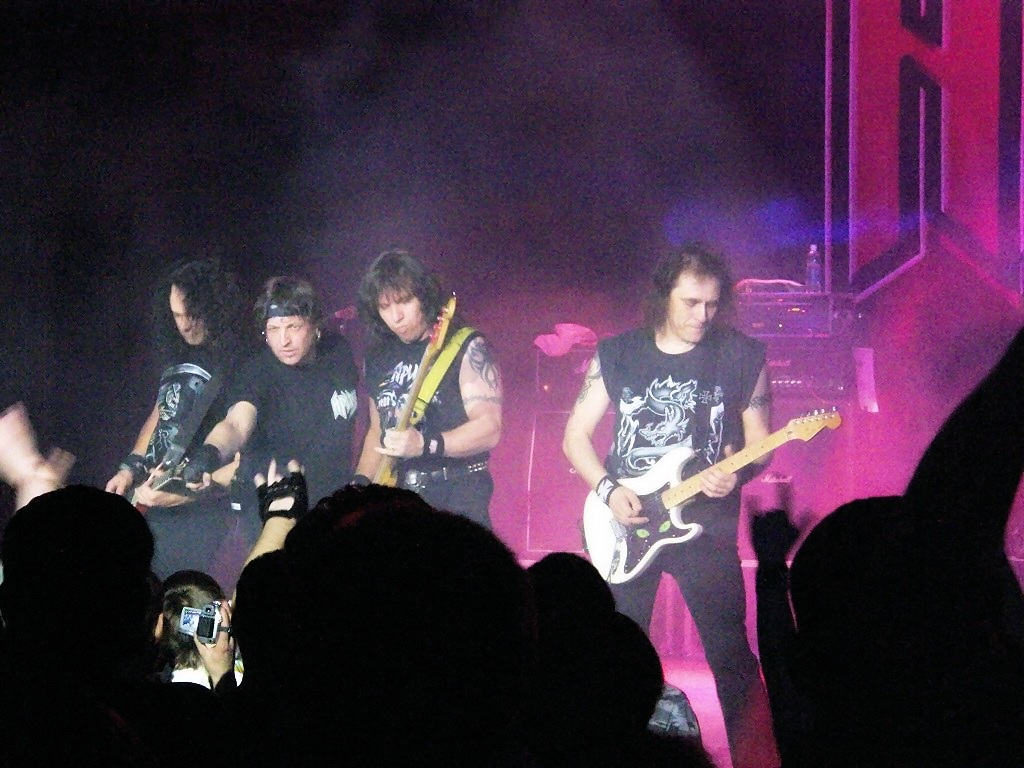 Aria ( _ru. Ария) is a popular n heavy metal band that formed in 1985. The music of Aria resembles the sound of bands, and they have been dubbed "Russian " by the media. Most of Aria's lyrics have been written by the poet Margarita Pushkina.

Aria is the root of so-called "Aria family": several bands formed by its former members. In 1987, four ex-members of Aria formed the band "Master", who are still considered, along with Aria, one of the most influential Russian metal bands. Vocalist , who was the main voice of the band for the majority of albums they have released, departed in 2002 and formed his own heavy-metal band "".

& of have covered an Aria song, "Shtil"' "( _ru. Штиль)". In this cover version, the song's name is Germanized and spelled as "Schtiel".

The band was founded by Vladimir Holstinin and Alik Granovsky, two members of "Poyushie Serdsa" and both formerly from the dissolved band "Alpha". Holstinin's idea of creating a heavy metal band was enthusiastically accepted by Granovsky. By 1985 they had most of the material for their album ready, all that remained was to find a recording studio and a vocalist. They asked Victor Vekshtein to be the band's manager and allow them to use his studio. The vocalist position was soon filled by .

The name "Ария" was given to the band because it was short, catchy and easy transliterated to "Aria". There's a version that the band name was thought up by Holstinin, who owns a guitar from the eponymous manufacturer. Both fans and members of Aria are often informally referred to as "ariytsi" (Russian for "").

According to the band's website, Aria's birthday is celebrated on , ; the date they finished working on their first album, "Megalomania". The album was noticed by heavy music fans because it was much unlike any hard rock music played in the at the time.

"Megalomania" was recorded with only Holstinin playing guitar (with Alexander Lvov on the drums and Kirill Pokrovsky on the keyboards.). The band needed a second guitarist to be able to play live - as a result, Andrey Bolshakov joined the band. In addition, Igor Molchanov (formerly from "Alpha") replaced Lvov on drums.

Aria's first live show was on , in DK MAI. The band was well received by the public, and soon became a laureate of the "Rock-Panorama-86" and "Lithuanika-86" festivals. Although they were still being ignored by the media, their popularity kept rising.

In November 1986, Aria released their second album, "". By this time, the band was divided by arguments concerning both the direction the band was heading, and Victor Vekshtein's management skills. After a tour in January, 1987, Granovsky, Bolshakov, Molchanov and Pokrovsky left the band (Granovsky and Bolshakov later formed the band "Master"). They were replaced by Vitaly Dubinin (Holstinin's university friend and former band mate) as bass guitarist, as second guitarist, and Maxim Udalov on the drums. Their first large show after the reorganization, and the subsequent tour proved that despite all rumours, the band was not dead.

In August 1987, Aria started working on their new album, "" (originally named "Serving the Forces of Evil"), which is considered one of the band's best albums. "Hero..." was Aria's first album published by the state music publishing monopoly . Every show on the subsequent two-year tour sold out. Over a million copies of the album's LP have been sold. A music video for the song 'Rose Street' was filmed, with the band's fans in mass scenes.

During that time, the band's relationship with their manager had reached a critical point. In October 1988, Udalov left the band because of the conflict, and in November Aleksandr Maniakin was invited to replace him. In 1989, the band then released their next album, "Playing With Fire", with Yuriy Fishkin as their manager.

In 1990, Dubinin and Mavrin signed up with the band "Lion Heart", and left for Munich, only to return in August after finding an opportunity to cancel their contract. After celebrating their five-year anniversary with several live shows, the band began to work on their fifth album "Blood for Blood", which was released in 1991.

In the early 1990s, the band decreased their activity significantly, greatly reducing the number of live shows they performed. In 1994, they created their own studio: "ARIA Records", and signed a five-year contract with the label . As a result, in the summer of 1994, the band's first five albums were released, including the earlier unreleased "Megalomania" and "". In September, they toured through Germany for two weeks, with live shows in seven cities, including Berlin's .

By the end of the 1994 tour in Germany, the band had a disagreement with the organizers, which also reflected on the relationship within the band. After the tour ended, Kipelov stopped showing up at the studio, where the band was hard at work at their next album. Within a month's time, he was found out to be playing with "Master". In December, Alexey Bulgakov (the lead singer for the band "Legion") tried out as Kipelov's replacement. In January 1995, Sergey Mavrin left the band, stating that he did not believe that the band would succeed without his friend Kipelov. Sergey Terentyev was invited to replace him as a session musician, and later becomes a permanent member of the band.

Kipelov returned to the band soon after they were threatened with sanctions by for breaching their contract. He recorded the vocal parts for the new album "", which was released in September 1995. The band played a series of concerts in the area, with Sergey Zadora as their new manager, recording a live album "Made in Russia", which ranked highly in the charts.

In 1997 Kipelov and Mavrin reunited in the duo album "Dark Ages". Dubinin and Holstinin also recorded their own, entitled "AvARIA", where Vitaly participated as vocalist. In 1998 Aria released "Generator of Evil", the album where Terentyev made his début as songwriter. Next came "Chimera" and the breakthrough single 'Lost Paradise', which did well in the NASHE Radio chart and raised Aria to the new level of popularity.

In 2001 Aria headlined the festival, where they played with a symphonic orchestra. This gave the band the idea for a 'Classical Aria' tour with an orchestra and a live album of the same name. Unfortunately, this was never released. During the tour, tension among the musicians and band's management arose. Kipelov refused to record a new album, already written by Dubinin and Holstinin, and declared he wanted to start a solo career. Sergey Terentyev, Alexander Maniakin and band's manager Rina Lee supported him, opposing the two band leaders and producer Yuri Sokolov. 'Classical Aria' became the band's farewell tour. After the final gig , at Luzhniki, , which was entitled 'Judgement Day' (this later became the name for the whole incident), Kipelov, Terentyev and Maniakin left Aria. The next day, they started a new band named .

The new face of Aria

Despite the rumours that Holstinin would disband Aria and start a new band called 'Himera', in November 2002 a new line-up of Aria appeared. Sergey Popov from 'Master' became the second guitarist, Arthur Berkut (ex-Autograph) was invited to be the new vocalist, and drummer Max Udalov returned. On , Aria released the single 'Coliseum' followed by the album . A video for 'Coliseum' was shot. The release was successful, the songs 'Coliseum' and 'Baptism by Fire' reached #1 on the rock charts, though many fans criticized it, arguing that Berkut's voice did not fit Aria's music.

Berkut and Holstinin participated in the "" ( _ru. Эльфийская Рукопись, 2004) metal opera by . Arthur played the role of Irdis the elven wizard while Vladimir played the lute and also produced the opera.

In 2005 Aria celebrated its 20th anniversary with a new tour. The band's former members where invited to participate in the anniversary tour. 'Master' and played at it, but Kipelov did not, because of his own tour schedule.

The newest album 'Armageddon' released by CD Maximum, came out in 2006, where Aria invited two new lyricists and Berkut made his début as composer.

On , , Kipelov and Mavrin made a brief re-union with Aria, during the tour celebrating the 20'th years anniversary of "" release.