The Oxford Cavaliers are a rugby league team based in Oxford. They play in the RLC West of England.

In their brief history Oxford Cavaliers have managed to supply players to professional clubs, such as Mike Castle and Corey Simms to the London Skolars, Darrell Griffin to Wakefield Trinity Wildcats, Barry Randall and Brad Smith to London Broncos via Rochdale Hornets as well as Steve Robinson to Henley Hawks rugby union club. They continue to be the only open rugby league club in the city, although there is also an Oxford University rugby league team as well as Brookes Bulls rugby league team at Oxford Brookes University.

Oxford Cavaliers were founded by Lionel Hurst in 1995. The club's name and colours refer to Oxford's English civil war heritage. The club crest is the red and blue royal standard that was flown when King Charles I held his court in Christchurch College. The first Oxford rugby league club, Oxford Sharks RLFC, had folded in 1993.

The first game was against Bath RLFC which Oxford won 36-16. The first competitive fixture was played in 1996 in the inaugural Summer Conference, the forerunner to the Rugby League Conference which started in 1997.

In 1998, five Oxford Cavaliers players were called up for the Rugby League Conference squad. ex-London Broncos alliance players Graham Crane (second row) and Simon Hill (skipper and scrum-half), also included were centre Paul Daly and forwards John Williams and Darrell Griffin were named in a 22-man squad for the games against the North East League at Chester on Sunday, and against the Combined Services.

In 1999 they reached the regional final of the Rugby League Conference, were awarded the title of Rugby League Conference Club of the Year and John Williams, Graham Crane, Steve Lacey, Simon Hill and Jon Flatman all received representative honours. In 2001, Lionel Hurst left the Oxford Cavaliers in order to become Chief Executive Officer of the London Broncos, the top flight rugby league club.

In 2000, Oxford's second player development rugby league camp was held by coaches from Super League outfit Halifax rugby league club. Twenty nominated under-13 boys from Oxford undertook a three-day residential course at the Hill End campus to receive training in all the skills and were put through their paces by several qualified coaches. They also received expert advice on nutrition, fitness and sports psychology. 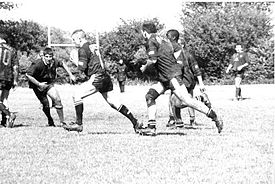 Also in 2000, Oxford Cavaliers coach Dave Doran was appointed head coach of the Rugby League Conference representative side. The Cavaliers themselves finished a credible tenth place in the RLC composite table of twenty four teams.

The club finished second only in the League table in the 2008 season; beating Telford Raiders, Coventry Bears, Swindon St George and Redditch Ravens in the process.

In 2011, the club joined the newly formed RLC West of England division. 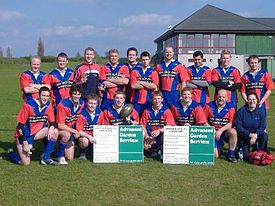 The Oxford Cavaliers after the Advanced Garden Services Cup victory in 2006.