Meiofauna are small benthic invertebrates that live in both marine and fresh water environments . The term Meiofauna loosely defines a group of organisms by their size, larger than Microfauna but smaller than Macrofauna, rather than a taxonomic grouping. In practice that is organisms that can pass through a 1 mm mesh but will be retained by a 45 μm mesh, but the exact dimensions will vary from researcher to researcher. Whether an organism will pass through a 1 mm mesh will also depend upon whether it is alive or dead at the time of sorting.

The term meiobenthos was first coined in 1942 by Mare, but organisms that would fit into the meiofauna category have been studied since the 18th century. A good comprehensive text on meiofauna is Introduction to the study of meiofauna by Higgins and Thiel (1988).

Meiofauna are most commonly encountered in sedimentary environments in both marine and fresh water environments, from the littoral to the deep-sea. They can also be found on hard substrates living on algae, the phytal environment, and sessile invertebrates (barnacles, mussel beds, etc.). 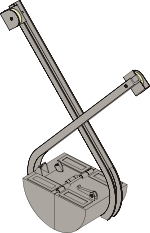 Sampling the meiobenthos is clearly dependent upon the environment and whether quantitative or qualititative samples are required. In the sedimentary environment the methodology used also depends on the physical morphology of the sediment. For qualititative sampling within the littoral zone, for both coarse and fine sediment, a bucket and spade will work. In the sub-littoral and deep water some form of grab (like the Van Veen grab) is required, although a fine mesh (about 0.25 mm or less) would work also.

For the quantitative sampling of sedimentary environments at all depths a wide variety of samplers have been devised. The simplest is a plastic syringe with the end cut off to form a piston corer which can be deployed in the littoral zone, or in the sub-littoral using SCUBA gear. Generally the deeper the water the more complicated the sampling process becomes. For sampling the meiofauna on hard substrates, phytal and epizooic environments, the only practical methodology is to cut or scrape off a known area of substrate and place it in a plastic bag.

There are a wide variety of methods for extracting meiofauna from the samples of their habitat depending upon whether live or fixed specimens are required. For extracting live meiofauna one has to contend with the large number of species that cling or attach themselves to the substrate when disturbed. In order to get the meiofauna to release their grip there are three methodologies available.

The first, and simplest, is osmotic shock, this is achieved by submerging the sample in fresh water (clearly this will only work for marine samples) for a few seconds. This will cause the organisms to release after which they can then be shaken free from the substrate and filtered out through a 45 μm mesh and immediately returned to fresh filtered seawater. Many organisms will come through this process unharmed as long as the osmotic shock does not last too long.

The second methodology is the use of an anaesthetic. The preferred solution for meiobenthologists is isotonic magnesium chloride (7.5g MgCl2 · 6H2O in 100 ml of distilled water). The sample is immersed in the isotonic solution and left for a period of 15 min, after which the meiofauna are shaken free of the substrate and again filtered out through a 45 μm mesh and immediately returned to fresh filtered seawater.

The third methodology is Uhlig's seawater ice technique. This relies on the organisms moving ahead of a front of ice cold seawater moving down through the sample ultimately forcing them out of the sediment. It is most effective on samples from temperate and tropical regions.

For major studies where large numbers of samples are collected concurrently, samples are normally fixed using 10% formalin solution and the meiofauna extracted at a later date. There are two main extraction methodologies. The first, decantation, works best with coarse sediments. Samples are shaken in an excess of water, the sediment is briefly allowed to settle and the meiofauna filtered off. The second methodology, the floatation technique, works best with finer sediments were the mass of the sediment particles is close to that of the meiofauna. The best solution to use is the colloidal silica, Ludox. The sample is stirred into the Ludox solution and left to settle for 40 min, after which the meiofauna are filtered out. With both methodologies repeated extractions should be made (at least three) with each sample to ensure that at least 95% of the fauna is extracted.

Based on the scheme of Nielsen (2001). Meiofaunal taxa appear in bold text.