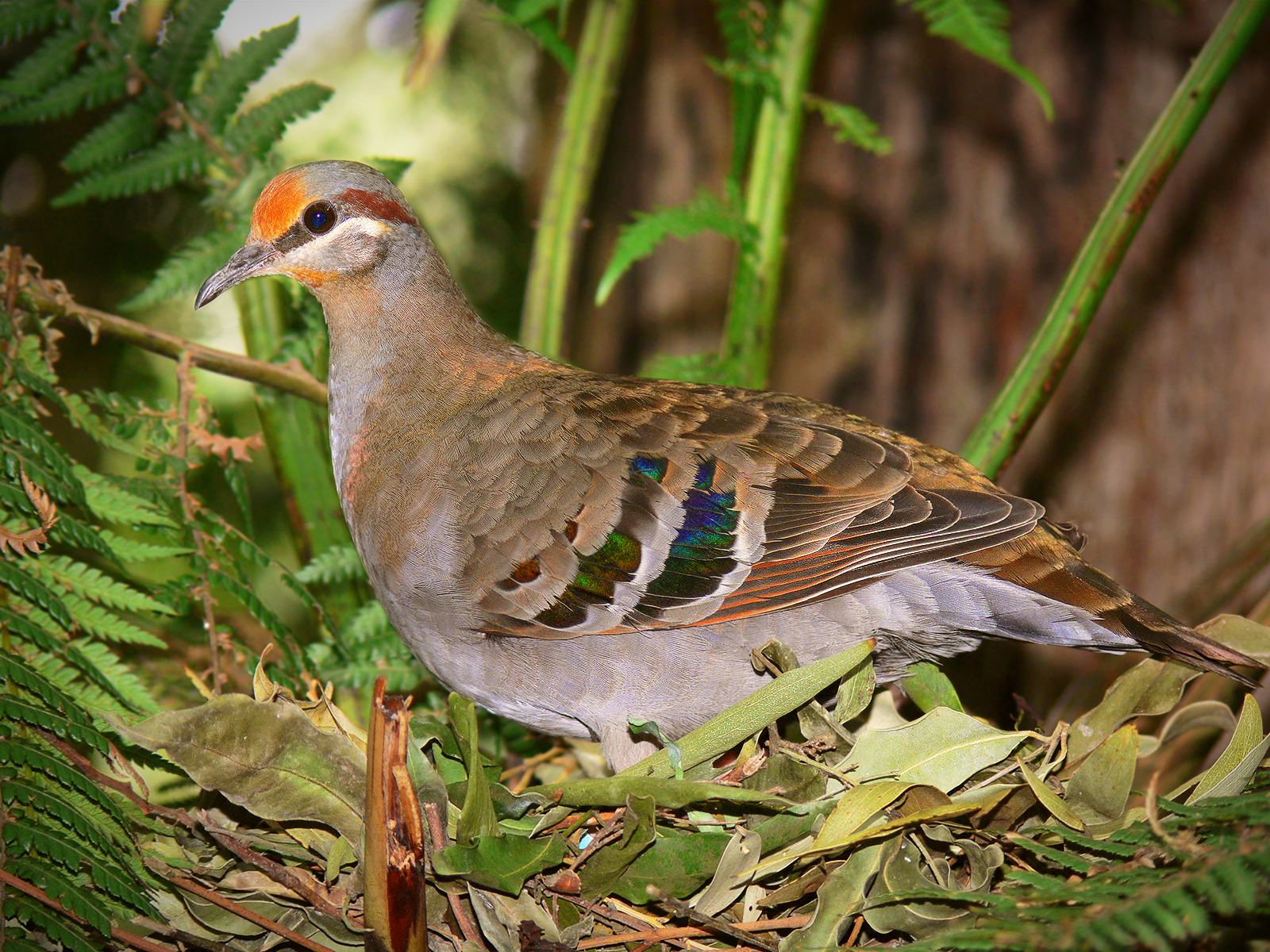 The bronzewing pigeons are a group of s native to which have distinctive iridescent wing patches that appear bronze or green-brown in dull light, but flash in many bright colours in the sun as the bird moves.

There are three always known as "bronzewings" in the "Phaps", and several broadly similar birds that also have the trademark wing patch to a more or less obvious degree. Bronzewings are ground feeders but capaple of very fast flight. They tend to browse quietly until disturbed, then remain still, their earthy browns blending into the earth and leaf litter until the intruder approaches too closely, at which point the bronzewing takes off with an explosive burst of sudden wing clapping and noise, and disappears from sight within moments.

* The ("Phaps calcoptera") is a large, bulky pigeon with a small head, found in all parts of Australia bar some of the deep desert, , and urban areas. Its advertising call is an extraordinary mournful "whooo" repeated at metronomic intervals for an interminable length of time. Although rather wary by nature, birds in the urban fringes become quite used to humans.
* The Brush Bronzewing ("Phaps elegans") is uncommon, probably threatened. Marginally smaller than the Common Bronzewing and rather secretive&mdash;except for its call, which is slightly faster and higher-pitched but maintained through the hottest days with equally monotonous determination. Brush Bronzewings nest low down, often on the ground, and are very vulnerable to feral s and es.
* Flock Bronzewings ("Phaps histrionica") roam the grasslands of the northern half of the continent. Once found in enormous flocks, they are still to be seen in their thousands. Pizzey's description of their habits is memorable: "When locally abundant, at end of day, undulating, shearwater-like flocks fly to water, settle short distance away, and walk in. Thirsty latecomers may drop directly into water and drink while spreadeagled, before springing off."
* Crested Pigeons ("Ocyphaps lophotes") are distinctive, common, and widespread. Usually seen in small flocks in open woodlands or grasslands, it is always close to water. With the clearing of much forest and the provision of water in arid regions for , Crested Pigeons have increased in number.
* The Spinifex Pigeon ("Geophaps plumifera") is an unmistakable ground-dwelling small pigeon, reddish-bronze in colour and prominently crested, with a unique upright, military stance. When dirturbed it prefers to run erratically, breaking into rapid, noisy flight only if pressed. A desert specialist, it is found in the arid and semi-arid zones of the northern half of the continent.
* The Partridge Pigeon ("Geophaps smithii") is a dull brown bird about 26 cm long found only in pairs or small flocks in the grasslands of northern and northern .
* The Squatter Pigeon ("Geophaps scripta"), like the very similar Partridge Pidgeon, spends feeds, roosts, and nests on the ground, and prefers infertile sandy s and gravel where the grass grows only thinly, allowing easy movement. Squatter Pigeons are restricted to the eastern half of and north-eastern .