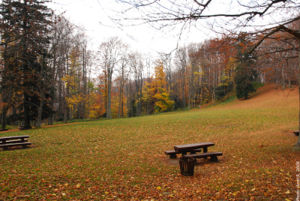 Medvednica (pronounced [mɛ̌dʋɛdnit͡sa]) is a mountain in central Croatia, just north of Zagreb and marking the southern border of the historic region of Zagorje. The highest peak, at 1,035 m, is Sljeme.[1] Most of the area of Medvednica is a nature park (park prirode), a type of preservation lesser than a national park.[2] The area of the park is 228.26 square kilometers and about 63% is covered with forest.

The name Medvednica could be translated as "bear mountain", there being other toponyms on the mountain using the kajkavian dialect term medved (standard Croatian "medvjed" = bear), notably Medvedgrad, a medieval castle on its southwestern edges.

Sljeme ([sʎɛ̂mɛ]) means summit, and is a name often used to refer to the entire mountain. 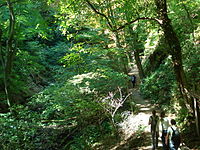 The climate on the Medvednica mountain is typical for Central European mountain ranges. The average annual precipitation is around 1300 mm (Zagreb - Grič 840 mm), also the reason for rich spring wells everywhere. The average annual temperature is around 7°C (Zagreb 12°C). There is a snow cover approximately for 100 days in a year, the thickest being in February, leaving the skiing slopes also covered with artificial snow when necessary. There is much more sunshine during the winter on Medvednica than in Zagreb or Zagorje, so it is not surprising that winter is the most visited season on the Medvednica mountain.

On average there are 15 days with temperature below –10°C, 8 days a year have average daily maximum higher than 25°C, and only one day above 30°C. The coldest month is January with mean monthly air temperature -3.1°C. The warmest month is July with average temperature 15.2°C. Insolation is much bigger than the one in Zagreb , about 100 hours annually. This difference is present during the colder period of the year, from October to March, when there is more fog in Zagreb. More clear skies on Medvednica than in the city are a good reason for pleasant winter excursions.

Relative air moisture is largest during the cold part of the year, and generally is larger on stations with higher altitude because of lower temperatures, but luxuriant vegetation. Number of days with relative moisture above 80% is greatest on Puntijarka (158 days annually), and it decreases with the decrease in elevation, for example on station Zagreb-Grič it is 67 days annually. On all stations the most thunderstorm days are in the warm part of the year (from April to September), when they are often connected to showers. These thunderstorm days occur in June (Puntijarka 7).

Annual precipitation on Medvednica is about 50% higher in comparison to Zagreb ( Zagreb 844 mm, Sljeme 1238 mm, Kraljičin zdenac 1159 mm, Faculty goods 1142 mm). Average number of days with hoar is 40 ( Zagreb 4). Mean annual number of days with snowfall on the top of Medvednica, most usually in January and February, is 54 days.

The Number of days with strong wind is 91 ( Zagreb 26) and they are more frequent during the cold part of the year, and the number of days with storm wind is 21 ( Zagreb 2), also during the cold part of the year. Forests of Medvednica have been heavily stricken by a catastrophic ice break which devastated forests (mainly beech) in November 1980, and later, in February 1983 large devastations occurred as a result of strong wing (large damage on fir). Effects of such a strong wind can still be seen in the area of Adolfovac. 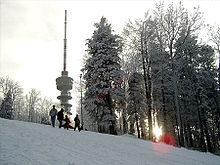 There is a winter sports center on the northern slopes towards Sljeme. The center has hosted several FIS World Cup slalom skiing races, known as the Snow Queen Trophy.

The winter sports center consists of one chairlift for three persons and two T-bar lifts. Equipment for producing artificial snow has been added, and because of that the skiing season has been prolonged to more than four months. There are three ways to reach the mountain: by car, on foot (there are numerous mountain paths) or by gondola lift, which starts from the Gračani neighborhood. The cable car has run since 1963, and takes four people, with a 23 minute journey time.

On Medvednica there are dozen of mountain huts for traditional one-day trips in the mountain. Because of its proximity to Zagreb, Medvednica has many visitors, especially during weekends[3]. Among the most popular sites is the Veternica cave with a 2,622 meters long main channel.