Douarnenez, (Breton: douar (land) an enez (the island) or land of the island), is a commune in the Finistère department of Brittany in north-western France.

It lies at the mouth of the Pouldavid estuary on the southern shore of Douarnenez Bay in the Atlantic Ocean, 25 kilometres (16 mi)(15 miles) north-west of Quimper.[1] The population in 1999 was 15,827, a decrease over previous counts. It still has fish canning facilities (sardines and mackerel) although sardine fishing, for which the town became famous, has fallen off in recent years. Increasingly, Douarnenez has become an attraction for tourists, not only in view of its pleasant location and warm climate but because of its marinas, its maritime museum, its regattas and its sandy beaches. The island of Tristan off Douarnenez has a mysterious past, linked as it is to the legend of Tristan and Iseult.

The legendary city of Ys, of Breton folklore, is believed to lie beneath Douarnenez Bay. The port is also associated with the medieval story of Tristan, lover of Iseult, for whom Tristan Island is named. The island was originally named St Tutuarn Island after the priory founded there in the 12th century. Douarnenez has several 16th and 17th century churches, including the Church of Ploaré, which has a Gothic steeple (1548–86), and the chapels of Sainte-Croix, Sainte-Hélène, and Saint-Michel.

The written history of Douarnenez begins around 1118 when, according to a charter dated 1126,[2] Robert de Locuvan, bishop of Cornouaille, donated the Island of St Tutuarn and the lands belonging to it to the Abbey of Marmoutier. As a result, a priory was built on the island. In the 14th century, the island became known as Tristan. The hamlet which grew up at today's Port of Rosmeur was originally part of the parish of Ploaré. It did not become a commune in its own right until 1790. In 1945, Douarnenez was expanded to include Ploaré, Pouldavid and Tréboul.[3] 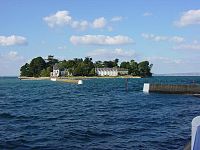 The fishing history of Douarnenez goes back to Gallo-Roman times when, as archeological finds demonstrate, fish were salted along the cliffs of Plomarc'h. In the years before the French revolution, sardines became the driving force for the local economy, culminating in huge fishing and canning activities at the beginning of the twentieth century. The strikes in the 1920s in favour of better working conditions for the factory women or Penn Sardin were the main reason why Douarnenez became one of the first communist municipalities in France. Today, the canning trade continues although most of the fish are brought in from other ports. Douarnenez is still a centre of boat building and repair work.

Douarnenez owes much of its prosperity and expansion to its old railways which provided services for passengers and goods from the end of the nineteenth century. From the railway station at the centre of Tréboul, the SNCF operated a service to Quimper.[4] The route began operations in 1884 but passenger trains were discontinued in 1972 while goods traffic continued until the final closure in 1988. The old line has now been converted into an 18 km (11 mi) cycling and walking track, providing an excellent means of discovering the surrounding countryside.

There was also another train out of Douarnenez, the so-called Youtar[5] a small-gauge railway to Audierne via Pont-Croix. Inaugurated in 1894, it was initially shut down in 1936 but was reopened during the Second World War until it finally closed in 1946. The old track between Audierne and Pont-Croix has been converted into a footpath along the River Goyen. 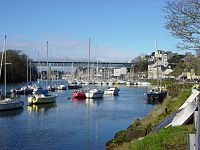 The town centre is located at the top of a peninsula separating the Port of Rosmeur on the eastern side from Port Rhu to the west. The steep, narrow cobbled streets which climb up to the town have changed little over the past century, revealing a wide range of places of interest, including old chapels, the Halles or covered market and unspoilt houses once inhabited by local fishermen.

The main square is not only the site of the local market but is the focus of shopping, banking and the local economy. There are a number of hotels and restaurants here as well as the post office and the tourist office.

Perhaps the most picturesque part of the town is the road along the sea front at the Port of Rosmeur which is lined with cafés and restaurants specialising in seafood.

The commercial harbour, including some of the fish processing and canning facilities, is at the northern end of the peninsula, as is historic Tristan Island which can be accessed on foot at low tide. The Plage des Dames, a quiet sandy beach surrounded by rocky cliffs, is also in this area. 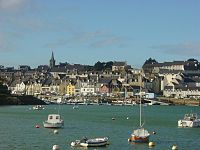 Douarnenez: The port of Tréboul seen from Douarnenez

Port Rhu is famous not only for its boat cemetery but for its Port-Musée or Museum Port where it is possible to walk around a number of fishing vessels dating back to the early 20th century. It includes an innovative indoor museum with exhibits on the sea, its history and its challenges.

Tréboul, situated on the other side of the estuary, also has a harbour for pleasure boats, lined with cafés and creperies. Les Sables blancs, a wide, sandy beach, is one of the main attractions. 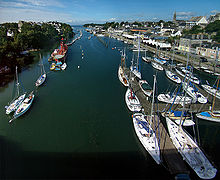 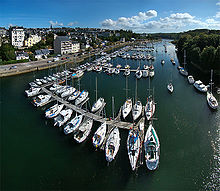 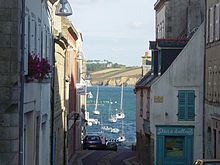 Douarnenez: Old street down to the Port du Rosmeur

Douarnenez is a haven for water sports enthusiasts, and there are lots of exciting possibilities within this genre for you to try. For those who prefer to stay out of the water, there is horse-riding, tennis, walking, cycling, petanque and even golf all within a short distance of the town.[1]

Since 1986, Douarnenez has organised maritime festivals once every two years, bringing together all types of traditional sailing, with competitors from the four corners of the earth. In 2004, a record year, there were almost 2000 sailing ships, 17,000 sailors and 30 participating countries.

Each year, Douarnenez has a full programme of festivals and events including regattas, local folklore, cinema, carnaval processions, gastronomy and sports. Details are available from the local tourist office. Tourism continues to prosper in Douarnenez with 91,400 visitors in 2009 representing an increase of 2.87% since 2005.[6]

There has been a revival of Breton culture in recent years typified by the Bagad de Douarnenez, a Breton music association with bagpipes and other local instruments. The Douarnenez film festival also owes much to the Breton revival, dealing as it does with films from minorities.

The Bretons and their culture

The Bretons came over from south-west Britain in the 4th to 6th centuries, bringing their language and culture. This explains why Breton, a Brythonic language, bears great similarities to the Cornish language and to Welsh. Many of the traditional stories and myths also share a Breton-Cornish heritage. There are now very few, if any, native speakers of Breton who are not fully bilingual in French although there were still several hundreds of thousands at the beginning of the 20th century. Today, there has been a revival with several Breton-language schools[7] in Finistère as well as Breton radio and TV[8] stations, bookshops, local theatre and music. It is estimated that over 500,000 people are now fluent in Breton.

The municipality launched a linguistic plan through Ya d'ar brezhoneg on December 22, 2004.

One of the main attractions in Douarnenez is the large number of usually quite small restaurants and crêperies around the town. Most specialise in seafood, usually offering fish soup, shellfish, crab, lobster, prawns, sardines, mussels and the catch of the day. Not to be forgotten is Douarnenez's buttery cake, kouign amann, which has now become famous throughout France and beyond. As for drinks, Breton cider can be drunk either alone or in wikt:kir breton, a cocktail consisting of cider and cassis.

At the covered market or les Halles, open every morning, there is always a wide variety of fresh fish and seafood as well as a selection of crêpes or thin pancakes which can be eaten with either sweet or savory fillings. And last but not least, the local canning factories continue to produce an ever more extensive range of sardines which are on sale everywhere.

Douarnenez is about five and a half hours' drive from Paris via Rennes, Lorient and Quimper. Quimper is also the best destination for air and rail connections to the region. There are regular bus connections between Quimper and Douarnenez, taking about 35 minutes.[10] From Quimper, there are high-speed trains to Paris (4 hours) and to other parts of France.

Quimper airport,[11] about 20 minutes by taxi from Douarnenez, has flights to Paris while Brest airport connects to Paris, Lyon, Birmingham, Southampton and other destinations.

It is, of course, also possible to reach Douarnenez by sea although there are no regular passenger services. Those arriving by pleasure boat will find berthing facilities in Douarnenez.

There is a ferry service [12] from Plymouth to Roscoff, less than two hours from Douarnenez by road.

Douarnenez has a number of municipal bus routes.[13]

One of the best ways of visiting Douarnenez is to follow the Sardine Route or Chemin de la Sardine, a walk through the town based on 19 panels (in French, English and Breton) at key points along the route explaining the history of the town with special emphasis on the sardine trade.

In the summer, there are also boat trips from Douarnenez around the bay with views of the sea caves on the north coast. The best way to see the caves themselves is to take a boat trip from Crozon which actually takes you inside the caves.

At low tide, it is possible to walk across to Tristan Island which is now increasingly open to the public. The island has several attractions including a harbour, a lighthouse, a walled garden, an orchard and an art gallery.

The coast itself stretching westwards to the Pointe du Raz and northwards to Crozon is best visited on foot. There are signposted footpaths which will lead you to all the rocky inlets and headlands, providing breathtaking views of the emerald sea. There are also a number of long, sandy beaches to the east of Douarnenez. A particularly attractive spot is Locronan, only a few kilometres from Douarnenez, which is a beautifully preserved Breton village with a number of interesting monuments. Last but not least, the historic city of Quimper has a great deal to offer: historic buildings, narrow streets, porcelain factories and the hustle and bustle of the city centre.

Douarnenez enjoys a mild, if rather wet climate. The prevailing winds are from the south west, bringing fairly frequent periods of light rain, particularly in the winter months. The summer months are much drier with temperatures averaging about 20 °C and sometimes climbing above 30 °C. It rarely freezes in winter and there is practically no snow. As a result, palm trees can be found in parks and gardens. In February and March, mimosa trees are in full blossom. There are strong tides, particularly in the spring. Winds blowing in from the Atlantic occasionally reach gale force. Details, including past averages, are available from Météo France.