Molesey is a town in the Borough of Elmbridge in Surrey, England. Situated on the outskirts of Greater London, approximately 13 miles (21 km) from Charing Cross, it is a typical suburban area. There are two distinct areas in the town: West and East Molesey. Neighbouring towns are Walton-on-Thames, Sunbury-on-Thames and Kingston-upon-Thames; nearby villages include Thames Ditton and Hampton.

Molesey now has a population of approximately 18,565.

The earliest documentary evidence relating to a settlement in Molesey appears on a 7th century charter; shortly after Erkenwald founded Chertsey Abbey in 666 A.D he secured from Frithwald, sub-king of Surrey, a charter endowing the abbey with much of the surrounding land, including Muleseg. Etymologists suggest the town's name is derived from the personal name Mul (pronounced Mule) compounded with the Old English word eg, meaning an island or river meadow - thus Mul's Island. Therefore Molesey is not, as commonly believed, named after the River Mole that runs through it. The prefixes East and West did not appear until about the year 1200, before when there was only one parish centred around what we now call East Molesey.[2] Molesey lay within the Saxon administrative district of Elmbridge hundred.

East Molesey appears in Domesday Book of 1086 as Molesham. It was held partly by John from Richard Fitz Gilbert and partly by Roger d'Abernon. Its domesday assets were: 2 hides and 3 virgates. It had 7 ploughs, 2 oxen, 32 acres (130,000 m2) of meadow, woodland worth 10 hogs. It rendered £6 15s 0d. Whilst West Molesey was held by Odard Balistarius. Its domesday assets were: 1 hide; 1 church, 5 ploughs. It rendered £4.[3]

Molesey was one of the many villages and towns along the Thames valley affected by the flooding of the River Mole in 1968.

East and West Molesey is officially divided by the Molesey Stone - it is located on the grass outside Molesey Library on Walton Road. A couple of years ago a car broke the stone but Elmbridge Borough Council were informed of the damage and repaired it.

Molesey lies south of the River Thames and bears several large reservoirs which provide water for central London. Some of these are now empty and are being converted into nature reserves. To the west lies Bessborough Reservoir and Knight Reservoir, to the northwest Molesey Reservoirs, to the south Island Barn Reservoir, and to the south-west Queen Elizabeth II Reservoir. 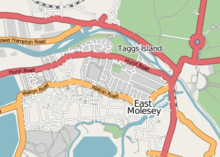 Hampton Court Palace sits opposite East Molesey, across the River Thames from Cigarette Island and Hampton Court Rail Station and can be reached by Hampton Court Bridge. Molesey Lock is just above the bridge. East Molesey boasts some interesting landmarks, including The Bell, a public house, formerly known as "The Crooked House" built in the mid-15th century.

Molesey was once the bare-knuckle boxing centre of England,[citation needed] and had a famous horse-racing track stretching the length of the River Thames from where Hurst Park School now stands, down to Molesey Lock. Much of the course was built on in the 1960s: the Hurst Park Estate has a mixture of three and two storey homes and a block of flats which overlooks the river. Some of the open space that was part of the racetrack is now a public park. There is a wide grass expanse, a playground and open access to the Thames. There are some large iron gates in the road called Graburn Way, which were built so that races then started just east of the road and enabled the course to have a 'straight mile'. Just beyond the gates used to be the home of the open air Upper Deck swimming pool. Popular with locals it was closed because of high maintenance costs by Elmbridge Borough Council. An indoor pool was built (on a different site) as a replacement but many feel that the Upper Deck was a community focal point as well as an amenity. Posh flats are now built on the site of the pool. The area was previously referred to as Moulsey Hurst.

'Moulsey Hurst' is a very early site of cricket (from 1731) and that tradition is continued to this day by East Molesey Cricket Club who were established in 1871.

Molesey Boat Club (est. 1866) is one of the UK's leading rowing clubs, with several Olympic and World Championship medallists in addition to domestic success at all ages.[citation needed]

AFC Molesey (previously Claygate Swans F.C.) who play in the Kingston and District league, are based in West Molesey. Their popularity has grown significantly in recent years following them winning several honours including the Lower Junior County Cup in the 2007/08 season.

In the early seventies, E.G Records offered the fledgeling band Roxy Music for a gig at the local Methodist Church. However, an organiser at the Church turned the then-unheard of band down as they were considered to be too arty.

The local railway station is Hampton Court railway station, operated by South West Trains. There is a regular stopping service to Waterloo. The route stops at Surbiton and Clapham Junction where connections can be made to Southbound services. The trip to Waterloo takes around 35 minutes and is popular with commuters. During the Hampton Court Palace Flower Show extra services are provided to and from London. All the stations to Waterloo are Thames Ditton, Surbiton, Berrylands, New Malden, Raynes Park, Wimbledon, Earlsfield, Clapham Junction, Vauxhall and Waterloo.

Bus links serve the short distance to nearby Kingston and Richmond, both suburban boroughs of London.

Molesey's main bus service, the 411 (previously the 131 from West Molesey to Wimbledon), is operated by Quality Line on behalf of Transport for London. The route starts at Central Avenue in West Molesey and runs through East Molesey, past Hampton Court Station and on to Kingston town centre where there are connections to buses throughout the local area. The bus runs a good schedule throughout the day and late into the evening. It used to be a double decker but the service is now a single decker.

Musician, TV Presenter and ex-actor Matt Willis moved to Molesey from Tooting, South London during his youth. Best known for being the bassist in the disbanded pop rock band 'Busted'. He released a solo album "Don't Let It Go To Waste" and won ITV's 'I'm a Celebrity... Get Me Out of Here!' in 2006. He also DJ-ed for many successful club nights in 2008.