AutoCAD is a CAD software application for 2D and 3D design and drafting. It is developed and sold by Autodesk, Inc. First released in December 1982, AutoCAD was one of the first CAD programs to run on personal computers, notably the IBM PC. At that time, most other CAD programs ran on mainframe computers or mini-computers that were connected to a graphics computer terminal for each user. AutoCAD derived from a program called Interact, which was written in a proprietary language (SPL) and ran on the Marinchip Systems 9900 computer (Marinchip was owned by Autodesk co-founders John Walker and Dan Drake.)

When Marinchip Software Partners (later renamed Autodesk) formed, they decided to re-code Interact in C and PL/1 They chose C because it seemed to be the biggest upcoming language. In the end, the PL/1 version was unsuccessful. The C version was, at the time, one of the most complex programs in that language. Autodesk even had to work with the compiler developer (Lattice) to fix certain limitations to get AutoCAD to run.[1] Early releases of AutoCAD used primitive entities — lines, polylines, circles, arcs, and text — to construct more complex objects. Since the mid-1990s, AutoCAD has supported custom objects through its C++ Application Programming Interface (API). Modern AutoCAD includes a full set of basic solid modeling and 3D tools. With the release of AutoCAD 2007 came improved 3D modeling, which meant better navigation when working in 3D. Moreover, it became easier to edit 3D models. The mental ray engine was included in rendering, it was now possible to do quality renderings. AutoCAD 2010 introduced parametric functionality and mesh modeling. 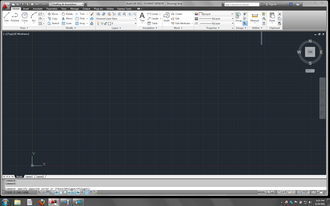 The latest AutoCAD release is AutoCAD 2012 and AutoCAD 2012 for Mac. This release marked the 26th major release for the AutoCAD for Windows, and the second consecutive year for AutoCAD for Mac.[2] Both the Windows and the Mac version can be found on the Autodesk website along with more detailed information about purchasing, licensing, and terms of agreement.

While the latest release of AutoCAD did not come with a major overhaul, the 2012 version did receive minor improvements. Several small changes were made to improve the 3D capabilities, and some new features were added to enhance the productivity of the program.[2] These changes and features included: increased canvas control, associated arrays, improved 3D model manipulation, and other less noticeable additions.[2] After the release of AutoCAD 2011 for Mac, the Windows version lacked several features found in the Mac version. Several of the Mac version canvas controls have now been added to the 2012 release. To accomplish the goal for better 3D model manipulation, Autodesk did away with the old saved history method and introduced a new plug-in that will automatically be installed - Autodesk Inventor Fusion. This plug-in allows users to directly open and edit 3D models without having to save and export their work manually. When the user is finished editing the plug-in automatically opens the updated version back in AutoCAD. Autodesk also replaced the older array feature with new associated arrays features. This now allows users to duplicate things using three different commands - polar arrays, rectangular arrays, and placing objects along a predetermined path. The new redesigned array feature will also work with both 2D and 3D objects.[2] Autodesk has also chosen to allow users to purchase companion applications directly within the AutoCAD 2012 program. [3] The newest release of AutoCAD also came with new system requirements and recommendations in order to run AutoCAD 2012. [2] 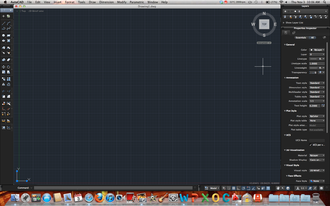 Autodesk stopped supporting Apple's computers in 1994. Over the next several years, no compatible versions for macintosh computers were released. In the fall of 2010 though, Autodesk announced that they would once again support Apple's Mac OS X software in their future version of AutoCAD. [4] Most of the same features found in the 2012 Windows version can also be found in the 2012 Mac version as well. The main difference is the user interface and layout of the program. The interface is designed so that users who are already familiar with Apple's OS X software will find it similar to other Apple applications. [5] Autodesk has also built in various features in order to take full advantage of Apple's trackpad capabilities as well as the fullscreen mode in Apple's OS X Lion. [5] [6] AutoCAD 2012 for Mac supports both the editing and saving of files in DWG formatting that will allow the file to be compatible with other platforms besides the OS X. [6] The following system requirements are recommend when using the AutoCAD 2012 for Mac program. [7]

With Autodesk's move to support Apple's Mac OS X, they have now decided to allow Mac users to purchase the AutoCAD LT 2012 version through the Mac App Store for $899.99. The full featured version of AutoCAD 2012 for Mac, however, is not currently available through the Mac App Store due to the price limit of $999 set by Apple. AutoCAD 2012 for Mac can currently be purchased only from Autodesk's website for $3995. [4]

AutoCAD LT is the lower cost version of AutoCAD, albeit, with reduced capabilities, first released in November 1993. AutoCAD LT, priced at $495, became the first product in the company's history priced below $1000 to bear the AutoCAD name. In addition to being sold directly by Autodesk, it can also be purchased at computer stores, unlike the full version of AutoCAD, which must be purchased from official Autodesk dealers. Autodesk developed AutoCAD LT to have an entry-level CAD package to compete in the lower price level.

As of the 2011 release the AutoCAD LT MSRP has risen to $1200. While there are hundreds of small differences between the full AutoCAD package and AutoCAD LT, currently there are a few recognized major differences[8] in the software's features: 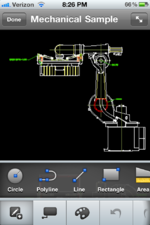 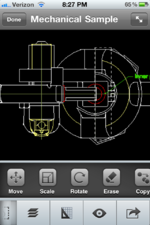 In 2010, Autodesk released their first AutoCAD mobile application AutoCAD WS. The mobile app allows registered users to “view, edit, and share” their work wherever they go. [9] The app can be downloaded for free from the App Store for iOS users or from the Amazon Appstore for Android users. A registered license is required to use the mobile app. Both the android and iOS versions allow users to save files online and offline when no internet connection is available. [10] Autodesk also announced future plans to store the majority of their software to the cloud (cloud computing) starting with the AutoCAD WS mobile app. [11]

Autodesk officially released their iOS mobile app in September of 2010. [5] This was the start of their mobile application marketing campaign. Since then the release has grown from just the iPhone to the iPod Touch, iPad, Android phones, and Android tablets. [6] The AutoCAD WS app has several of the desktop AutoCAD features, but is limited in other areas. The app provides the ability to draw lines, circles, and other various shapes. Text and comment boxes are supported features. Colors, Layers, and measurement are also included features found in the mobile app. The latest version, version 1.3, was released on August 17, 2011 and added the following features: unit typing, layer visibility, area measurement, and file management. [9] Both landscape and portrait modes are supported while using the app.

Autodesk announced that they would release their Android mobile app on April 20, 2011. [10] The app is very similar to the iOS app with basically all the same features and abilities. The Android AutoCAD WS mobile app has some unique features not found in the iOS version. The Android App allows users to insert text or captions by voice commands instead of forcing them to manually input the text into the drawings. [10] This feature is not currently supported on the iOS mobile device.

Built on the AutoCAD platform, AutoCAD Freestyle is a simplified, low-cost (US$149) application that makes it easy to create accurate, professional-looking 2D drawings and sketches. This software has been discontinued by Autodesk.

AutoCAD is licensed at a significant discount over commercial retail pricing to qualifying students and teachers, with a 36-month license available. The student version of AutoCAD is functionally identical to the full commercial version, with one exception: DWG files created or edited by a student version have an internal bit-flag set (the "educational flag"). When such a DWG file is printed by any version of AutoCAD (commercial or student), the output includes a plot stamp / banner on all four sides. Objects created in the Student Version cannot be used for commercial use. Student Version objects "infect" a commercial version DWG file if imported.[12]

Autodesk has also developed a few vertical programs, for discipline-specific enhancements. AutoCAD Architecture (formerly Architectural Desktop), for example, permits architectural designers to draw 3D objects such as walls, doors and windows, with more intelligent data associated with them, rather than simple objects such as lines and circles. The data can be programmed to represent specific architectural products sold in the construction industry, or extracted into a data file for pricing, materials estimation, and other values related to the objects represented. Additional tools generate standard 2D drawings, such as elevations and sections, from a 3D architectural model. Similarly, Civil Design, Civil Design 3D, and Civil Design Professional support data-specific objects, facilitating easy standard civil engineering calculations and representations.

AutoCAD's native file format, DWG, and to a lesser extent, its interchange file format, DXF, have become de facto standards for CAD data interoperability. AutoCAD in recent years has included support for DWF, a format developed and promoted by Autodesk for publishing CAD data. In 2006, Autodesk estimated the number of active DWG files at in excess of one billion.

In the past, Autodesk has estimated the total number of existing DWG files as more than three billion.[26]

AutoCAD supports a number of APIs for customization and automation. These include AutoLISP, Visual LISP, VBA, .NET and ObjectARX. ObjectARX is a C++ class library, which was also the base for products extending AutoCAD functionality to specific fields, to create products such as AutoCAD Architecture, AutoCAD Electrical, AutoCAD Civil 3D, or third-party AutoCAD-based applications.