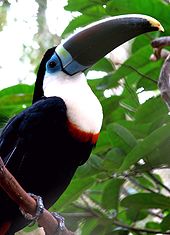 At first this may resemble a Cuvier's Toucan, R. t. cuvieri, but a closer look reaveals a brownish patch on the upper part of the mandible, identifying it as a tucanus-cuvieri intergrade. 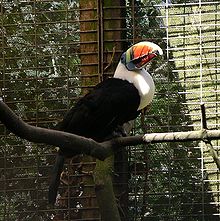 The White-throated Toucan (Ramphastos tucanus) is a near-passerine bird found throughout the Amazon in south-eastern Colombia, eastern Ecuador, eastern Peru, northern Bolivia, southern and eastern Venezuela, northern and western Brazil, including the Amazon Basin's adjacent Tocantins-Araguaia River drainage, and the Guianas. It prefers tropical humid forest, but also occurs in woodland and locally in riverine forest within the Cerrado.

It was formerly considered to be two species, with the southern and western nominate subspecies, R. t. tucanus, named the Red-billed Toucan, and the northern and eastern subspecies, R. t. cuvieri, Cuvier's Toucan (when considered a species; R. cuvieri, Wagler, 1827). However, the two subspecies, which differ principally in the bill colour, interbreed freely wherever they meet and therefore merit only subspecies status. The subspecies R. t. inca from Bolivia is of questionable validity and may represent a stable hybrid population between tucanus and culminatus.

It has black plumage with a white throat and breast bordered below with a narrow red line. The rump is bright yellow and the crissum is red. The bare skin around the eye is blue. The bill has a yellow tip, upper ridge and base of the upper mandible, and the base of the lower mandible is blue. The rest of the bill is mainly black in R. t. cuvieri and mainly reddish-brown in R. t. tucanus, with intergrades showing a mixed coloration. Males are larger and longer-billed than females, but otherwise the sexes are alike.

Juveniles are noticeably shorter-billed, more sooty-black, and have duller plumage.

The White-throated Toucan of the race cuvieri is virtually identical to the related Channel-billed Toucan of the race culminatus, but the latter is smaller and has a proportionally shorter bill with a more strongly keeled culmen. The call is often the best distinction between the species. White-throated has a yelping eeoo, hue hue, whereas Channel-billed has a croaking song.

Small flocks or more commonly pairs of birds move through the forest with a heavy, rather weak, undulating flight, rarely flying more than 100 m (330 ft) at a time. This species is primarily an arboreal fruit-eater, but will also take insects, lizards, bird eggs, and other small vertebrate prey.

The 2–4 white eggs are laid in an unlined cavity high in a decayed section of a living tree, or in an old woodpecker nest in a dead tree.

Both sexes incubate the eggs for at 14–15 days, and the toucan chicks remain in the nest after hatching. They are blind and naked at birth, with short bills, and have specialised pads on their heels to protect them from the rough floor of the nest. They are fed by both parents, and fledge after about 6 weeks. The parents continue feeding the juveniles for several weeks after they have left the nest.