Lucy the Elephant
This article is about Lucy, a six-story architectural creation. For Lucy, the Asian elephant, see Lucy (elephant).

Lucy the Elephant is a six-story elephant-shaped example of novelty architecture, constructed of wood and tin sheeting in 1882 by James V. Lafferty in Margate City, New Jersey, two miles (3.2 km) south of Atlantic City, in an effort to sell real estate and attract tourism. 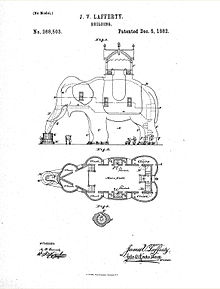 The idea of an animal-shaped building was innovative, and in 1882 the U.S. Patent Office granted Lafferty a patent giving him the exclusive right to make, use or sell animal-shaped buildings for seventeen years. Lucy is the oldest example of zoomorphic architecture based on this patent. Lafferty, in fact, constructed several elephant-shaped buildings. The first was built at South Atlantic City, which later changed its name to Margate. This structure, whose original name was "Elephant Bazaar", was dubbed "Lucy the Elephant" in 1900. She stands 65 feet (19.7 m) high, 60 feet (18.3 m) long, and 18 feet (5.5 m) wide, weighs about 90 tons, and is made of nearly one million pieces of wood. She was sold to new owners in 1887. The second to be built, the Elephantine Colossus, also known as the Elephant Hotel was built at Coney Island amusement park in Brooklyn, New York. It was 12 stories (122 feet, 37.2 m) tall, with legs 60 feet in circumference. It held a cigar store in one leg and a dioramic display in another, hotel rooms within the elephant proper, and an observation area at the top with panoramic sea views. The Elephantine Colossus was destroyed by fire in 1896. The third, officially the Light of Asia, but dubbed Old Dumbo by locals, was built at Cape May in 1884. It was later torn down: only Lucy survived into the next century.

Over the years, Lucy had served as a restaurant, business office, cottage, and tavern (the last closed by Prohibition). A popular story is that Lucy once housed a hotel, but this is untrue. Lucy had fallen into disrepair by the 1960s and was scheduled for demolition. She was moved and refurbished as a result of a "Save Lucy" campaign in 1970 and received designation as a National Historic Landmark in 1976.

According to the official history of Lucy published by the Save Lucy Committee, in 1969 Edwin T. Carpenter and a group of Margate citizens formed the Margate Civic Association, which eventually under Josephine Harron and Sylvia Carpenter become the Save Lucy Committee. They were given a 30-day deadline for relocation, or be solely responsible to demolition and removal costs. Money was raised by various fund-raising events, with the most successful being a door to door canvass by volunteers. She was moved and refurbished in 1970 and received designation as a National Historic Landmark in 1976.

Lucy was struck by lightning for the first time in Spring 2006; the tips of the tusks became blackened.

Lucy's head shape identifies her as an Asian Elephant. She has tusks, which is a feature found only in male Asian elephants. In the first few years following her construction she was referred to as a male, however she is now generally considered to be female.

In November 2006, Lucy was prominently featured in an advertisement for Proformance Insurance.

Lucy was also featured in the show Life After People in 2009. This showed how the environment would take over the structure of the elephant over periods of time without people to maintain Lucy. 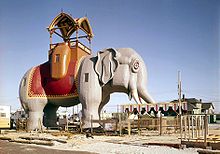