A landfill in Poland

A landfill site (also known as tip, dump or rubbish dump and historically as a midden), is a site for the disposal of waste materials by burial and is the oldest form of waste treatment. Historically, landfills have been the most common methods of organized waste disposal and remain so in many places around the world.

Landfills may include internal waste disposal sites (where a producer of waste carries out their own waste disposal at the place of production) as well as sites used by many producers. Many landfills are also used for waste management purposes, such as the temporary storage, consolidation and transfer, or processing of waste material (sorting, treatment, or recycling).

A landfill also may refer to ground that has been filled in with rocks instead of waste materials, so that it can be used for a specific purpose, such as for building houses. Unless they are stabilized, these areas may experience severe shaking or liquefaction of the ground in a large earthquake. 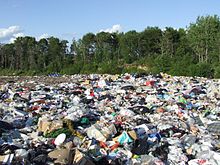 A section of a landfill located in Barclay, Ontario. This landfill is one of several landfills used by Dryden, Ontario.

Typically, in non hazardous waste landfills, in order to meet predefined specifications, techniques are applied by which the wastes are:

During landfill operations the waste collection vehicles are weighed at a weighbridge on arrival and their load is inspected for wastes that do not accord with the landfill’s waste acceptance criteria. Afterward, the waste collection vehicles use the existing road network on their way to the tipping face or working front where they unload their contents. After loads are deposited, compactors or dozers are used to spread and compact the waste on the working face. Before leaving the landfill boundaries, the waste collection vehicles pass through the wheel cleaning facility. If necessary, they return to the weighbridge in order to be weighed without their load. Through the weighing process, the daily incoming waste tonnage can be calculated and listed in databases, In addition to trucks, some landfills may be equipped to handle railroad containers. The use of 'rail-haul' permits landfills to be located at more remote sites, without the problems associated with many truck trips.

Typically, in the working face, the compacted waste is covered with soil daily. Alternative waste-cover materials are several sprayed-on foam products and temporary blankets. Blankets can be lifted into place with tracked excavators and then removed the following day prior to waste placement. Chipped wood and chemically 'fixed' bio-solids may also be used as an alternate daily cover. The space that is occupied daily by the compacted waste and the cover material is called a daily cell. Waste compaction is critical to extending the life of the landfill. Factors such as waste compressibility, waste layer thickness and the number of passes of the compactor over the waste affect the waste densities.

Landfill operation. Note that the area being filled is a single, well-defined "cell" and that a rubberized landfill liner is in place (exposed on the left) to prevent contamination by leachates migrating downward through the underlying geological formation.

A large number of adverse impacts may occur from landfill operations. infrastructure damage (e.g., damage to access roads by heavy vehicles); pollution of the local environment (such as contamination of groundwater and/or aquifers by leakage or sinkholes[1] and residual soil contamination during landfill usage, as well as after landfill closure); offgassing of methane generated by decaying organic wastes (methane is a greenhouse gas many times more potent than carbon dioxide, and can itself be a danger to inhabitants of an area); harbouring of disease vectors such as rats and flies, particularly from improperly operated landfills, which are common in developing countries; injuries to wildlife; and simple nuisance problems (e.g., dust, odour, vermin, or noise pollution).

Most modern landfills in industrialized countries are operated with controls to attempt to manage problems such as these. Analysis of common landfill operational problems are available.[2]

Some local authorities have found it difficult to locate new landfills. Communities may charge a fee or levy in order to discourage waste and/or recover the costs of site operations. Many landfills are publicly funded, but some are commercial businesses, operated for profit. 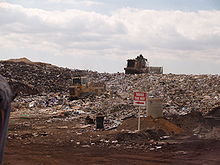 A landfill in Perth, Western Australia

Main article: Landfill in the UK

Landfilling practices in the UK have had to change in recent years to meet the challenges of the European Landfill Directive. The UK now imposes landfill tax upon biodegradable waste which is put into landfills. In addition to this the Landfill Allowance Trading Scheme has been established for local authorities to trade landfill quotas in England. A different system operates in Wales where authorities are not able to 'trade' between themselves, but have allowances known as the Landfill Allowance Scheme.

In the U.S., landfills are regulated by the state's environmental agency that establishes minimum guidelines; however, none of these standards may fall below those set by the United States Environmental Protection Agency (EPA); such as was the case[citation needed] with the Fresh Kills Landfill in Staten Island, which is claimed by many to be the world's largest landfill.[citation needed] The landfill has since been closed and is being transformed into a park.

Landfills can be regarded as a viable and abundant source of materials and energy. In the developing world, this is widely understood and one may thus often find waste pickers scavenging for still usable materials. In a commercial context, landfills sites have also been discovered by companies and many have begun harvesting materials and energy .[3] Well known examples are gas recovery facilities.[4] Other commercial facilities include fossil fuel power plants and waste incinerators which have built-in material recovery. This material recovery is possible through the use of filters (electro filter, active carbon and potassium filter, quench, HCL-washer, SO2-washer, bottom ash-grating, etc.). An example of these is the AEB Waste Fired Power Plant.[5][6] The AEB waste incinerator is hereby able to recover a large part of the burned waste in source materials. According to Marcel van Berlo (who helped build the plant), the processed waste contained higher percentages of source materials than any mine in the world. He also added that when the plant was compared to a Chilean copper mine, the waste fired plant could recover more copper.[7] However, because of the high concentration of gases and the unpredictability of the landfill contents, which often include sharp objects, landfill excavation is generally considered dangerous. Furthermore, the quality of materials residing within landfills tends to degrade and such materials are thought to be not worth the risks required to recover them.

In recent years, some countries, such as Germany, Austria, Belgium, the Netherlands, and Switzerland, have banned the disposal of untreated waste in landfills. In these countries, only the ashes from incineration or the stabilized output of mechanical biological treatment plants may still be deposited.