Born in Toronto, Canada, her real name was Morrison. She was reared in Cleveland, Ohio, where at the Academy of Music she became a member of the ballet and afterward leading actress.

She went to New York in 1870 as a member of Daly's company. In 1872, she made a sensation in L'Article 47. Other successes followed and she became known as an actress distinguished for spontaneity and naturalness. She was married to F. C. Harriott in 1874.

In her book Life on the Stage: My Personal Experiences and Recollections she recounts her meeting with John Wilkes Booth the assassin of Abraham Lincoln.

Complete blindness overtook her in 1910, and her old age was embittered by poverty. The house in which she had lived for 37 years was sold in 1914, and Miss Morris moved to Whitestone, Long Island 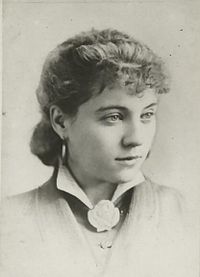