Smith Corona or the SCM Corporation is a US typewriter and calculator company. Once a large U.S. manufacturer, the company experienced sales declines in typewriters in the mid-1980s due to the introduction of PC-based word processing. Its competitors include Brother, Olivetti and IBM. 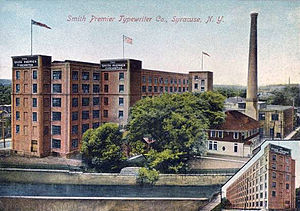 The company originated in 1886 when the Smith Premier Typewriter Company was established by brothers; Lyman Cornelius Smith, Wilbert Smith, Monroe C. Smith and Hurlburt Smith. The brothers created the first machine to use both uppercase and lowercase letters.[1] This was accomplished with a unique feature that made use of a double keyboard. The advertisements "cunningly boasted" that there was "a key for every character!"[2]

In 1887, the Smith-Premier, the first typewriter to bear the Smith name, was manufactured in Lyman C. Smith's gun factory on South Clinton Street in Syracuse, New York. Alexander T. Brown, an employee, invented the machine, and Wilbert Smith financed the construction of the prototype.[1]

Lyman Smith and Wilburt Smith owned a gun factory in Syracuse and after they hired Brown he sparked Wilburt's interest in financing and improving typewriters. The parts of a typewriter are surprisingly similar to those of a shotgun "so producing the typewriter at the gun factory was logical and easy."[2]

Business was going so well, in 1888, the Smith brothers discontinued shotgun production and strictly produced typewriters with the help of their younger brothers, Monroe Smith and Hurlburt Smith.[2]

Younger brother, Leroy Smith, invented the Peerless typewriter in 1891, which "greatly resembled" the Smith-Premier. It had the same double keyboard with 76 characters and also had "blind type" so the typist could not see what was being printed.[2]

During 1893, Smith joined with the Union Typewriter Company, a trust in Syracuse which included rival firms Remington, Caligraph, Densmore and Yost.[3]

Not long after, Union took action and blocked the Smith Premier Typewriter Company from using the new front strike design, which allowed typists to see the paper as they typed. As a result, the Smith brothers quit in 1903 and founded L. C. Smith & Bros. Typewriter Company. The new company soon released the "L.C. Smith & Bros. Model No. 2", which was an odd beginning because, a full year later, they released the "L.C. Smith & Bros. Model No. 1." Carl Gabrielson was the inventor of both No. 1 and No. 2 models.[3][4]

During 1906, the Rose Typewriter Company of New York City marketed the first successful portable typewriter. They were "bought out" by Smith in 1909 and the company moved upstate to Groton, New York. At that time, the firm was renamed Standard Typewriter Company.[5] 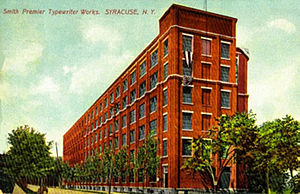 To promote usage of the typewriter, the company began by offering typing services at the company headquarters located at the corner of East Genesee and Washington streets in Syracuse. An advertisement on December 27, 1904, for Smith Premier typewriters, touted the Employee Department which offered services such as finding a "competent stenographer (male or female) to operate any make of machine." The company advertised they could provide the services promptly, saving clients time and trouble and "examining" all applicants. Operators could perform duties such as stenographer, typewriter, telegrapher and bookkeeper.[6] 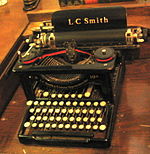 Smith-Corona as used at a newspaper in Saskatoon around 1910.

Production shifted from typewriters to various military weapons and parts during World War II. In October 1942, Smith-Corona Typewriter Company began producing M1903A3 Springfield rifles at its plant in Syracuse, with assistance from Remington Arms and High Standard Manufacturing Company. Subcontractor barrels give unusual collector value to some of these 234,580 Springfield rifles. Serial numbers 3608000 to 3707999 and 4708000 to 4992000 carry the Smith-Corona name on the receiver ring. While many M1903A3 rifles manufactured by Remington have 2-groove barrels, most rifles assembled by Smith Corona used 4-groove barrels manufactured by High Standard, and approximately five thousand of the barrels finished by High Standard were from 6-groove barrel blanks made by Savage Arms.[7]

Bolts on Remington M1903A3 rifles have a parkerized finish and are stamped with the letter R at the root of the handle; while Smith Corona bolts are blued and usually stamped with a letter X on top of the handle, although some are unmarked. Some extractors on Smith Corona rifles are stamped with a letter S on the bottom. Stamped steel stock fittings were generally blued, although some were parkerized in late production. Butt plates of the Smith Corona rifles were checkered with 10 or 11 lines per inch, while Remington used 16 lines per inch. Rifle production ceased on February 19, 1944, when supplies of standard M1 Garand rifles were considered adequate. Some of the rifles were never issued, while others were reconditioned in government armories after service use. Reconditioned rifles often have substituted parts from Remington or Springfield manufacture. Most rifles were stored after the war until many were sold through the Civilian Marksmanship Program in the early 1960s.[7]

After the war, the company concentrated on making its typewriters more convenient and efficient for use in business offices. Typewriter sales peaked after World War II; in response to a demand for typewriters capable of faster output, Smith Corona introduced electric typewriters in 1955. Electric portables, intended for travelling writers and business people, but later widely purchased for general home use, were introduced in 1957.[4] The new portable electric typewriters would become an essential tool for generations of U.S. high school and college students.

In a diversification move that later proved unsound, Smith Corona purchased Marchant Calculator in 1958. The company invented the typewriter power carriage return in 1960, the same year it moved from Syracuse to Cortland, New York. In 1962, they changed their corporate name to Smith-Corona Marchant (SCM). In 1967, SCM purchased the Allied Paper Corporation for $33 million. 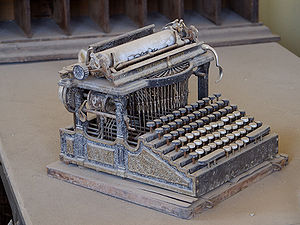 This Smith Premier typewriter, purchased around the end of the 19th century, was found abandoned in the Bodie, California ghost town.

The new paper-making division was named SCM Allied Paper. In 1973, SCM introduced a cartridge ribbon which eliminated the long-standing problem of getting ink-stained fingers from hand-threading a replacement spool of inked ribbon. The calculator market was devastated by cheap electronic pocket calculators in the mid 1970s. By 1985, personal computers were being widely used for word processing, and SCM launched their first portable word processor, along with the first portable typewriter that included an electronic spelling function.

The company moved its typewriter manufacturing operations from Cortland to Mexico in 1995 and announced it was cutting 750 jobs as a result of continuing sales declines. Shortly thereafter, the company declared bankruptcy.[8][9] Since 1995, the company has concentrated on sales of portable electronic typewriters, as well as typewriter and word processor supplies. The company's current electronic models feature LCD displays, built-in dictionaries, and spell check and grammar check features.