Chester Northgate is a former railway station in Chester, Cheshire that was a terminus for the Cheshire Lines Committee and Great Central Railway. It was the city centre's second station with trains to Manchester, Birkenhead and North Wales.

The station, which was located on Victoria Road in the Newtown area of the city, was originally planned by the West Cheshire Railway in 1865. A year later the company was acquired by the Cheshire Lines Committee. It opened the station on May 1, 1875 (1875-05-01) for train services to Manchester Central on the Mid-Cheshire Line via Northwich. The CLC track crossed the London, Midland and Scottish Railway and Great Western Railway line over a flying junction at Mickle Trafford.

Chester Northgate had a station building and two covered roofs, it had four tracks with two side platforms. There were also lower level sidings that contained a locomotive yard.[1]

A triangle junction outside the station allowed trains to either terminate at Chester Northgate or pass through the city without stopping. During the Second World War, the station served military personnel that were based at RAF Sealand and at Blacon Camp.

In 1969 a level junction was installed at Mickle Trafford so Manchester trains could be diverted to Chester General.

Although Chester Northgate closed, the line it once served remained open for another 25 years. It was used by the Corus steelmaking plant at Shotton until March 1980.[2] Freight continued to pass the former station on a double-tracked line until 20 April 1984. Goods services resumed on a single-track line on 31 August 1986 before final closure in the early 1990s.[1][3]. The trackbed is now a cycle way. 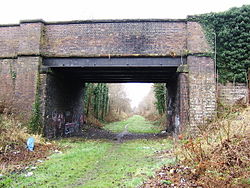 Part of the former CLC trackbed near Chester.