Arabian Sea
This article is about the Arabian Sea (Bahr al-'Arab). For the river in Sudan, see Bahr al-Arab.

The Arabian Sea (Malayalam: അറബിക്കടല്‍ Aṟabikkadal, Sanskrit: सिन्धू सागर: Sindhusagaraha, Arabic: بحر العرب ‎ Baḥr al 'Arab, Kannada,Tulu: ಅರಬ್ಬೀ ಸಮುದ್ರ Arabi Samudra, Marathi: अरबी समुद्र Arabi Samudra, Persian Darya-ye 'Arab) is a region of the Indian Ocean bounded on the east by India, on the north by Pakistan and Iran, on the west by the Arabian Peninsula, on the south, approximately, by a line between Cape Guardafui in northeastern Somalia and Kanyakumari in India. Some of the ancient names of this body of water include Sindhu Sagar (meaning "Sea of Sindh" in Sanskrit)[1] and Erythraean Sea. 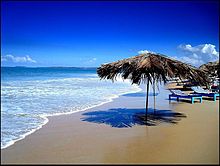 The Arabian Sea has two important branches — the Gulf of Aden in the southwest, connecting with the Red Sea through the strait of Bab-el-Mandeb; and the Gulf of Oman to the northwest, connecting with the Persian Gulf. There are also the gulfs of Cambay and Kutch on the Indian coast. The largest islands in the Arabian Sea are Socotra (off the Horn of Africa) and Masirah (off the Omani coast) as well as the Lakshadweep archipelago off the Indian coast.

The countries with coastlines on the Arabian Sea are Somalia, Djibouti, Yemen, Oman, Iran, Pakistan, India and the Maldives. There are several large cities on the Arabian Sea coast including Aden, Muscat, Karachi, Surat, Mumbai, Mangalore, Kozhikode, Kochi and Thiruvananthapuram.

The International Hydrographic Organization defines the limits of the Arabian Sea as follows:[3]

On the West. The Eastern limit of the Gulf of Aden [The meridian of Cape Guardafui (Ras Asir, 51°16'E)].

On the South. A line running from the South extremity of Addu Atoll (Maldives), to the Eastern extreme of Ràs Hafun (Africa, 10°26'N).

It is known as the Sindhu Sagar to Indians since the Vedic period of their history, and an important marine trade route in the era of the coastal sailing vessels from possibly as early as the 3rd millennium BCE, certainly the late 2nd millennium BCE through the later days known as the Age of Sail. By the time of Julius Caesar, several well-established combined land-sea trade routes depended upon water transport through the Sea around the rough inland terrain features to its north. 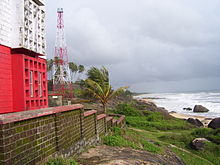 Surathkal beach, Mangalore on the shores of Arabian sea

These routes usually began in the Far East or down river from Madhya Pradesh with transshipment via historic Bharuch (Bharakuccha), traversed past the inhospitable coast of today's Iran then split around Hadhramaut into two streams north into the Gulf of Aden and thence into the Levant, or south into Alexandria via Red Sea ports such as Axum. Each major route involved transhipping to pack animal caravan, travel through desert country and risk of bandits and extortionate tolls by local potentiates.

This southern coastal route past the rough country in the southern Arabian peninsula (Yemen and Oman today) was significant, and the Egyptian Pharaohs built several shallow canals to service the trade, one more or less along the route of today's Suez canal, and another from the Red Sea to the Nile River, both shallow works that were swallowed up by huge sand storms in antiquity. Later the kingdom of Axum arose in Ethiopia to rule a mercantile empire rooted in the trade with Europe via Alexandria.

Ocean trade routes have crossed the Arabian Sea since ancient times, linking the Near East with East Africa, India, Southeast Asia, and China. Historically, sailors in a type of ship called a dhow used the seasonal monsoon winds to cross the water. The sea forms part of the chief shipping route between Europe and India via the Suez Canal, which links the Red Sea with the Mediterranean Sea.