College of Physicians and Surgeons of Ontario

College of Physicians and Surgeons of Ontario 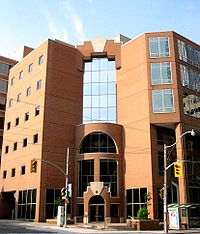 The College of Physicians and Surgeons of Ontario building in Toronto.

The College of Physicians and Surgeons of Ontario (CPSO) is the governing body for medical doctors in Ontario, Canada.

The college issues certificates of registration for all doctors to allow them to practise medicine as well as: 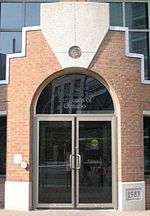 Entrance to the College of Physicians and Surgeons of Ontario building in Toronto.

The College of Physicians and Surgeons of Ontario (CPSO) is the self-regulating body for the province's medical profession. The College regulates the practice of medicine to protect and serve the public interest. It issues certificates of registration to doctors to allow them to practise medicine, monitors and maintains standards of practice through peer assessment and remediation, investigates complaints against doctors on behalf of the public, and disciplines doctors who may have committed an act of professional misconduct or incompetence.

The medical profession has been granted a great degree of authority by provincial law, and that authority is exercised through the College. This system of self-regulation is based on the premise that the College must act first and foremost in the interest of the public. All doctors in Ontario must be members of the College in order to practise medicine in the province. The role of the College, as well as its authority and powers, are set out in the Regulated Health Professions Act (RHPA), the Health Professions Procedural Code under the RHPA and the Medicine Act.

The duties of the College include:issuing certificates of registration to doctors to allow them to practise medicine monitoring and maintaining standards of practice through peer assessment and remediation investigating complaints about doctors on behalf of the public, and conducting discipline hearings when doctors may have committed an act of professional misconduct or incompetence.

The College is governed by a council. The RHPA stipulates that it consist of at least 32 and no more than 34 members: 16 physicians elected by their peers on a geographical basis every three years; 3 physicians appointed from among the six faculties of medicine (at the University of Western Ontario, McMaster University, University of Toronto, Queen's University, University of Ottawa, and the Northern Ontario School of Medicine); no fewer than 13 and no more than 15 non-physician or 'public' members appointed by the provincial government for terms decided by the government.

Both medical faculty members and public members may be re-appointed at the end of their terms. The College President is elected from and by Council and serves a one year term.

Council members sit on one or more committees of the College. Each committee has specific functions, most of which are governed by provincial legislation.

General Council meetings are held five times a year, at which time the activities of the College are reviewed and matters of general policy are debated and voted on.

Meetings of Council are open to the public and are held in the 3rd floor Council Chamber at 80 College Street, Toronto, Ontario.

The complaints process regarding physicians begins with a phone call to the Public Advisory Department at 416-967-2603 or 1-800-268-7096 extension 603. A College staff member in the Investigations and Resolutions Department experienced in health care will help you. Staff may be able to answer questions about your care; clarify which questions to take back to your doctor; and/or answer questions about how the health care system works. Your medical records may be reviewed and discussion with the doctor in question will be scheduled. Staff will ask the doctor for a response.

College staff may also arrange to meet with you, and possibly with you and the doctor(s) – perhaps even hospital administrators – to communicate and clarify issues. This gives you the opportunity to tell the doctor and others about your concerns.

This process provides a forum for you to have your concerns heard and acknowledged by the doctor and/or hospital representatives, and is done only with both your and the doctor’s agreement. Occasionally, an improvement to the way in which health care is delivered has come about as a result of these discussions.

With a significant shortage of family physicians, the College has been criticized for the rigorous demands it places on foreign-trained physicians (also known as international medical graduates), who seek a license to practise medicine.

Michael Urbanski, in a piece in the Toronto Star, stated that Canada already has a hidden reserve of foreign-trained MDs eager to begin medical practice "... what's crucial to understanding the issue of doctor shortage in Ontario is that while the Liberal government is planning to go "poaching" for other countries' doctors, there are an estimated 4,000 internationally trained doctors right here in Ontario working at low-wage jobs... often with many years' medical experience abroad and many have virtually no hope of practising in Canada."[2][3][4]

Some have suggested that CPSO policy has arisen out of physician self-interest because the most commonly used fee-for-service compensation model may lead to reduced salaries with more licensed physicians,[citation needed] rather than the goal of assuring a high quality of patient care.

Statistics released by the CPSO and from Statistics Canada suggest foreign-trained physicians in Ontario are gaining licensure in record numbers and have always been a large part of the Canadian physician workforce. In 2006, 42% (or 1247 of 2961) of physicians licenced by the CPSO were international medical graduates.[5] In the two years preceding (2004 and 2005), the CPSO licensed more international medical graduates than graduates of Ontario medical schools.[5]

Overall, the number of foreign-trained physicians is slightly higher than the percentage of workers born outside of Canada; according to the Romanow Report, 24.5% of Ontario's licenced physician are foreign-trained,[6] this is higher than the percentage of foreign born workers according to Statistics Canada (approximately 20%).[7]