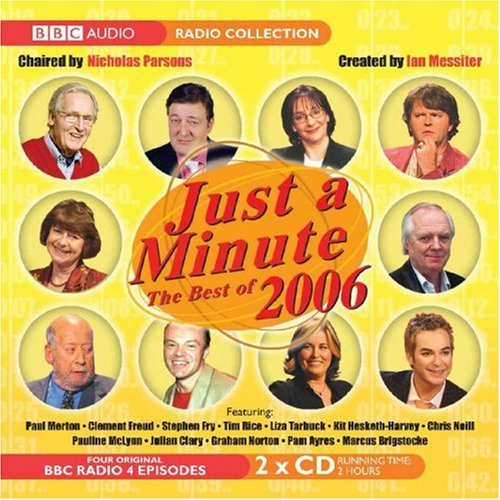 "Just a Minute" is a which has been broadcast since and is hosted by . It began in the year that Radio 4 launched, and is one of the station's longest running programmes. [BBC Radio 4 was launched on 30 September 1967, around three months before "Just a Minute" was created.] "Just a Minute" won a Gold in . [cite web|url=http://www.radioawards.org/winners03/win03.htm|title=2003 Winners|publisher=Sony Radio Academy Award|accessdate=2007-09-07]

The object of the game is for panellists to talk "for just a minute" on a given subject, "without repetition, hesitation or deviation". The game comes from attempts to try to keep within these rules, which whilst they appear to be simple, are very hard not to break. To speak for the full minute without being challenged is extremely difficult, and meritorious when achieved.

Originally known as "One Minute Please",

A pilot for the show was recorded in 1967, featuring and as panellists. The chairman was originally planned to be , but he was replaced with Parsons. Although stated in the 40th anniversary edition that Parsons has chaired the show ever since without missing a single episode, this is not entirely accurate. On the 21st of October, 1968, it was chaired by Kenneth Williams with Nicholas Parsons being one of the four contestants. As chairman, Kenneth Williams tended to go with any challenger, using a prompted audience response to overcome any objections by Nicholas Parsons or Clement Freud. Additionally both Clement Freud and Geraldine Jones have chaired earlier shows (see below for more details), with Nicholas Parsons as a contestant. On one occasion, when Clement Freud was late for the recording, Ian Messiter stepped in to the chair at short notice, with Nicholas Parsons once again competing. When the pilot was made, executives at the BBC disliked it. In response, the producer of the pilot, , threatened to resign if the series was not commissioned. As the BBC did not want to lose Hatch, they allowed the series to be made with Hatch as producer.

The show broadcast on featured the highest scorer, Nicholas Parsons, with 33 points. [cite episode|title=Episode 18|series=Just a Minute|airdate=1968-07-10|season=2|episode=2] Generally, however, the points are de-emphasised for the "value to the show" as Parsons often puts it. Still, many competitors (Merton, Freud and chief among them) are extremely competitive and often say things just to get bonus points.

The four panellists are challenged to speak for one minute on a given subject without "repetition, hesitation, or deviation". Over the years, the application of these rules has changed:

* "Repetition" originally meant not repeating a particular idea or concept, but is now understood to prevent repetition of any word or phrase, although challenges based upon very common words such as "and" are generally rejected except in extreme cases (for example, when repeated half a dozen times or more).

A panellist scores a point for making a correct challenge against whoever is speaking, while the speaker gets a point if the challenge is deemed incorrect. However, if an "incorrect", but witty, interjection amuses the audience, both the challenger and speaker may gain a point, at the chairman's discretion. A player who makes a correct challenge takes over the subject for the remainder of the minute, or, more likely, until he or she is correctly challenged within the rules of the game. A panellist also scores a point if he is the person speaking when the 60 seconds expires. An extra point is always awarded when speaking for the entire minute without being challenged.

The difficult part of the game is to continue to speak within the three cardinal rules for any substantial length of time, whilst remaining coherent, and hopefully also being amusing. Therefore, to speak for the full minute without being challenged is an honour. Below is an example of a speech given by which lasted for a full minute without being challenged. The subject was, "How to win an argument".

"Well it varies according to the person that you are arguing with. Should it be a child that you are having a contretemps with, the ideal is deviation tactics. For instance Lola Lupin who I mentioned before won't eat her dinner. So what I do is say, "yes it is rotten food, let us sing a song", making sure that that particular chanson has a few vowels in it that require her to open her mouth! During which I pop the spoon in and I have won the argument. However if it is an argument with a person that knows their subject what I do is nod sagely and smile superciliously, let them ramble on, and at the end I say "well I'm sorry, I think you're completely wrong", turn on my heels and leave. I..." [cite episode|title=Episode 633|series=Just a Minute|airdate=2005-07-25|season=50|episode=3]

The points system means that great rewards may go to those who make entertaining challenges, even if they do not speak for very long. An often rewarding time to challenge is a few seconds before the minute ends. Here, one could get a point for a challenge, not have to speak very much, and get another point for speaking "as the whistle went". The game is scored and a winner declared, but the attraction of the show lies less in the contest than in the humour and banter of its participants.

The structure of the second season in 1967 was slightly different. There were three panellists and a chairman, with the latter position 'rotating' each week and the previous incumbent joining the panel. The four contributors were Clement Freud, Kenneth Williams, Geraldine Jones and Nicholas Parsons. In addition to the repetition, hesitation, deviation rules, there would be occasional rounds where individual words like 'An', 'A' or 'The' would be prohibited.

The chairman and host of "Just a Minute" is . He has held this position since the show's inception, although on occasion he has swapped the chair with contestants including Clement Freud and Kenneth Williams. Ian Messiter also chaired on one occasion in 1977, when Clement Freud arrived late and Nicholas Parsons was required to take his place on the panel. [cite episode|title=Episode 230|series=Just a Minute|airdate=1977-01-12|season=11|episode=11]

Until , Ian Messiter sat quietly on the stage with a stopwatch and blew a whistle when the speaker's minute was up. He was replaced by a series of different whistle-blowers for a decade until Janet Staplehurst took on the role permanently in 1999, until she retired at the end of the first 2006 series. [cite episode|title=Episode 650|series=Just a Minute|airdate=2006-03-13|season=51|episode=11] Trudi Stevens is the current incumbent. Messiter continued to be involved with the show, setting the subjects until his death in .

For the first few decades of the programme, there were four regular competitors, , , and . Clement Freud likes to list examples, and to challenge with only a few seconds to go. Derek Nimmo frequently improvised descriptions of his experiences abroad, often on theatrical tour. Peter Jones once said that in all his years of playing the game, he never quite got the hang of it, though his self-deprecating, laconic style was perfect for a game he understood perfectly. Kenneth Williams was often the "star of the show": his flamboyant tantrums, arch put-downs, and mock sycophancy made him the audiences' favourite. Williams often stretched out his speeches by extending every syllable to breaking point (some words lasting for up to three seconds), and his regular mock-anger often included the complaint, "I've come all the way from ," which was not far away from where the show was recorded.

Freud, the only survivor of the four, still appears regularly, and is also now considered a regular, but it is relatively common for an edition to feature one or neither of these two. Merton frequently launches into flights of fancy, such as claiming to have had unusual occupations or to have experienced significant historical events. He often wins by challenging just before the whistle, and by accruing bonus points "because the audience liked his interruption".

Other panellists who contribute quite often include , who weaves elaborate monologues with innuendo, , who appears almost as often as Merton (and also often delves into the surreal), and , who has been known to quickly challenge himself before anyone else notices his transgression — according to the rules he thus wins the right to continue speaking. Other frequent guests include , , , , , , , , and . New players are introduced fairly frequently.

"Just a Minute" has always been recorded in theatres, although the location was never given during the first 25 years of the show. The first show in 1967 was recorded in the Playhouse Theatre in central London, and the 35th anniversary show was recorded there on New Year's Day 2003. [cite episode|title=Episode 1|series=Just a Minute|airdate=1967-12-22|season=1|episode=1] [cite episode|title=Episode 577, 35th Anniversary Special|series=Just a Minute|airdate=2003-01-01|season=45|episode=1]

Several television versions have been attempted. Two pilot episodes were recorded for in and but never broadcast, except in documentaries about Kenneth Williams. In 1994, nine shows were broadcast on a regional channel. Two additional variations were added: a round in which the team were presented with an object to talk about, rather than a subject, and another round where the audience suggested a topic. featured in all programmes.

Later that year, another five instalments were broadcast in a very similar style to the first nine, and in 1995, fourteen more episodes were broadcast. "Just a Minute" became a team game, with the Midlands and London playing against each other, under team captains Tony Slattery and . Each player earned individual points, which were totalled for each team at the end of the show. The gimmick of the audience choosing a subject was abandoned in this series. Both this series and the series before were produced by .

In 1999, the televised the show, with twenty episodes recorded during a single week in Birmingham.

A Swedish version of the show, called "På minuten", has been broadcast on P1 since 1969. It has been referenced in other BBC panel games. The similarly long-running "" includes a musical parody entitled "Just a Minim", in which the contestants must sing a song, but sticking to the rules of "Just a Minute". "Clue" also mentions "Just a Minute" and especially Nicholas Parsons frequently.

Nicholas Parsons was once a guest host on an April 2005 edition of BBC One's satirical panel game, "". He surprised Paul Merton's opposing team captain, , by asking him to talk about "Taking advice from your lawyer" within the "Just a Minute" rules. At one point, one of the guests, , challenged for deviation, claiming it was the wrong programme. [cite episode|title=Episode 242|episodelink=List of Have I Got News For You episodes|series=Have I Got News for You|serieslink=Have I Got News for You|airdate=2005-04-29|season=29|episode=3]