Arthroscopy (also called arthroscopic surgery) is a minimally invasive surgical procedure in which an examination and sometimes treatment of damage of the interior of a joint is performed using an arthroscope, a type of endoscope that is inserted into the joint through a small incision. Arthroscopic procedures can be performed either to evaluate or to treat many orthopedic conditions including torn floating cartilage, torn surface cartilage, ACL reconstruction, and trimming damaged cartilage.

The advantage of arthroscopy over traditional open surgery is that the joint does not have to be opened up fully. Instead, for knee arthroscopy for example, only two small incisions are made — one for the arthroscope and one for the surgical instruments to be used in the knee cavity. This reduces recovery time and may increase the rate of surgical success due to less trauma to the connective tissue. It is especially useful for professional athletes, who frequently injure knee joints and require fast healing time. There is also less scarring, because of the smaller incisions. Irrigation fluid is used to distend the joint and make a surgical space. Sometimes this fluid leaks into the surrounding soft tissue causing extravasation and edema.

The surgical instruments used are smaller than traditional instruments. Surgeons view the joint area on a video monitor, and can diagnose and repair torn joint tissue, such as ligaments and menisci or cartilage.

It is technically possible to do an arthroscopic examination of almost every joint in the human body. The joints that are most commonly examined and treated by arthroscopy are the knee, shoulder, elbow, wrist, ankle, foot, and hip.

Professor Kenji Takagi in Tokyo has traditionally been credited for performing the first arthroscopic examination of the knee joint of a patient in 1919. He used a 7.3 mm cystoscope for his first arthroscopies. Recently it has been discovered that the Danish physician Severin Nordentoft reported on arthroscopies of the knee joint as early as 1912 at the Proceedings of the 4lst Congress of the German Society of Surgeons at Berlin.[1] He baptized the procedure (in Latin) arthroscopia genu. Nordentoft used sterile saline or boric acid solution as his optic media and entered the joint by a portal on the outer border of the patella. However, it is not clear if these examinations were anatomic studies of deceased or of living patients.

Pioneering work in the field of arthroscopy began as early as the 1920s with the work of Eugen Bircher.[2] Bircher published several papers in the 1920s about his use of arthroscopy of the knee for diagnostic purposes.[2] After diagnosing torn tissue through arthroscopy, Bircher used open surgery to remove or repair the damaged tissue. Initially, he used an electric Jacobaeus thoracolaparoscope for his diagnostic procedures, which produced a dim view of the joint. Later, he developed a double-contrast approach to improve visibility.[3] Bircher gave up endoscopy in 1930, and his work was largely neglected for several decades.

While Bircher is often considered the inventor of arthroscopy of the knee,[4] the Japanese surgeon Masaki Watanabe, MD receives primary credit for using arthroscopy for interventional surgery.[5][6] Watanabe was inspired by the work and teaching of Dr Richard O'Connor. Later, Dr. Heshmat Shahriaree began experimenting with ways to excise fragments of menisci.[7]

The first operating arthroscope was jointly designed by these men, and they worked together to produce the first high-quality color intraarticular photography.[8] The field benefited significantly from technological advances, particularly advances in flexible fiber optics during the 1970s and 1980s. 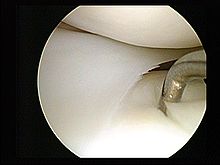 Lateral meniscus located between thigh bone (femur, above) and shin bone (tibia, below). The tibial cartilage displays a fissure (tip of teaser instrument).

Knee arthroscopy has in many cases replaced the classic arthrotomy that was performed in the past. Today knee arthroscopy is commonly performed for treating meniscus injury, reconstruction of the anterior cruciate ligament and for cartilage microfracturing. Arthroscopy can also be performed just for diagnosing and checking of the knee; however, the latter use has been mainly replaced by magnetic resonance imaging.

During an average knee arthroscopy, a small fiberoptic camera (the arthroscope) is inserted into the joint through a small incision, about 4 mm (1/8 inch) long. A special fluid is used to visualize the joint parts. More incisions might be performed in order to check other parts of the knee. Then other miniature instruments are used and the surgery is performed.

Arthroscopic surgeries of the knee are done for many reasons, but the usefulness of surgery for treating osteoarthritis is questionable. A double-blind placebo-controlled study on arthroscopic surgery for osteoarthritis of the knee was published in the New England Journal of Medicine in 2002.[9] In this three-group study, 180 military veterans with osteoarthritis of the knee were randomly assigned to receive arthroscopic débridement with lavage, or arthroscopic lavage alone without debridement (a procedure only imitating the surgical debridement, where superficial incisions to the skin were made to give the appearance that the debridement procedure had been performed). For two years after the surgeries, patients reported their pain levels and were evaluated for joint motion. Neither the patients nor the independent evaluators knew which patients had received which surgery (thus the "double blind" notation). The study reported, "At no point did either of the intervention groups report less pain or better function than the placebo group."[9] Because there is no confirmed benefit for these surgeries in cases of osteoarthritis of the knee, many payors are reluctant to reimburse surgeons and hospitals for what can be considered a procedure which seems to create the risks of surgery with questionable or no demonstrable benefit.[10]

A 2008 study confirmed that there was no long-term benefit for chronic pain, above medication and physical therapy.[11] Since one of the main reasons for arthroscopy is to repair or trim a painful and torn or damaged meniscus, a recent study in the New England Journal of Medicine which shows that about 60% of these tears cause no pain and are found in asymptomatic subjects, further calls the rationale for this procedure into question.[12]

After having a knee arthroscopy, there will be swelling around the knee. Swelling can take anywhere from 7–15 days to completely settle. It is important to wait until there is no swelling left around the knee before doing any serious exercise or extensive walking, because the knee will not be fully stable; extensive exercise may cause pain and in some cases cause the knee to swell more.

Hip arthroscopy was initially used for the diagnosis of unexplained hip pain, but is now widely used in the treatment of conditions both in and outside the hip joint itself. The most common indication currently is for the treatment of femoroacetabular impingement (FAI) and its associated pathologies, however, this is by no means where it ends. Hip conditions that may be treated arthroscopically also includes labral tears, loose / foreign body removal, hip washout (for infection) or biopsy, chondral (cartilage) lesions, osteochondritis dissecans, ligamentum teres injuries (and reconstruction), Iliopsoas tendinopathy (or ‘snapping psoas’), trochanteric pain syndrome, snapping iliotibial band, osteoarthritis (controversial), sciatic nerve compression (piriformis syndrome), ischiofemoral impingement and direct assessment of hip replacement. 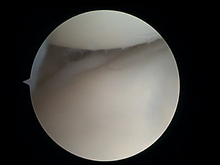 Arthroscopy of the wrist is used to investigate and treat symptoms of repetitive strain injury, fractures of the wrist and torn or damaged ligaments. It can also be used to ascertain joint damage caused by arthritis.

Many invasive spine procedures involve the removal of bone, muscle, and ligaments to access and treat problematic areas. In some cases, thoracic (mid-spine) conditions requires a surgeon to access the problem area through the rib cage, dramatically lengthening recovery time.

Arthroscopic (also endoscopic) spinal procedures allow a surgeon to access and treat a variety of spinal conditions with minimal damage to surrounding tissues. Recovery times are greatly reduced due to the relatively small size of incision(s) required, and many patients are treated on an outpatient basis.[13] Recovery rates and times vary according to condition severity and the patient's overall health.

The Arthroscopy Journal on Wikipedia