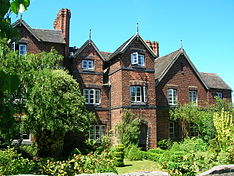 Moseley Old Hall is a National Trust property located in Fordhouses, north of Wolverhampton in the United Kingdom. It is famous as one of the resting places of Charles II of England during his escape to France following defeat at the Battle of Worcester in 1651.

The Hall was built in 1600 and was the home of the Whitgreaves, a local Staffordshire family, mostly Catholics and Royalists. Thomas Whitgreave assisted Charles II when he arrived in the early hours of 8 September after the journey from Boscobel House. Thomas gave the King dry clothes, food, and a proper bed (his first since Worcester on 3 September). The King was hidden in the priest-hole for two days whilst planning the route for his escape. He was accompanied by the family's Catholic priest John Huddleston who cleaned and bandaged the King's feet.

Descendants of the Whitgreave family owned the house until 1925, and during that time made few structural changes, apart from encasing the Hall with brick walls and replacing the Elizabethan windows. After the 1820s, it appears to have been abandoned as the family home, in favour of Moseley Court, a new Regency style house built for George Whitgreave. It was used as a farmhouse until the Second World War but was suffering from neglect when the National Trust took it over in 1962. It is now fully restored, and furnished with generous donations of period furniture. The original four-poster bed used by Charles stands in the King's room.