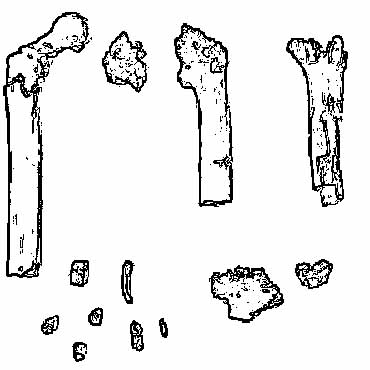 "Orrorin tugenensis" is considered to be the oldest known ancestor related to modern s and is the only species classified in genus "Orrorin". The name was given by the discoverers who found "Orrorin" s in the of . By using dating techniques, the volcanic tuffs and lavas, faunal correlation and magneto-stratigraphy, the strata in which the fossils were found were estimated to date between 6.1 and 5.8 million years ago, during the . This find is significant because it represents the earliest hominid species with evidence of locomotion.

The fossils found so far come from at least five individuals. They include a , suggesting that "Orrorin" walked upright; a right shaft, suggestive of tree-climbing skills but not ; and teeth that suggest a diet much like that of modern humans. The on the posterior aspect of the neck of the fossil femur suggests that "Orrorin tugenensis" moved bipedally. The bunodont, microdont molars and small canines suggest that "Orrorin" ate mostly fruit and vegetables, with occasional meat. "Orrorin" was about the size of a modern .

The team that found these fossils in 2000 was led by and from the . The discoverers conclude that "Orrorin" is a hominin on the basis of its bipedal locomotion and dental anatomy; based on this, they date the split between hominins and African s to at least 7 million years ago, in the . This date is markedly different from those derived using the approach, but has found general acceptance among paleoanthropologists.

If "Orrorin" proves to be a direct human ancestor, then s such as "" ("Lucy") may be considered a side branch of the hominid family tree: "Orrorin" is both earlier, by almost 3 million years, and more similar to modern humans than is "A. afarensis". The main similarity is that the Orrorin femur is morphologically closer to that of "H. sapiens" than is "Lucy's"; there is, however, some debate over this point.

Other fossils (leaves and many mammals) found in the Lukeino Formation show that "Orrorin" lived in dry evergreen forest environment, not the assumed by many theories of . Thus, the origins of bipedalism occurred in an arboreal precursor living in forest and not a quadrupedal ancestor living in open country. A recently published idea suggests that ancestral apes may have shared the technique used by modern s of moving bipedally over small springy branches with the vertebral column oriented vertically (orthograde), using their arms for balance and keeping their legs straight. This kind of upright locomotion could have been used as a way of getting around on the ground when gaps opened in the forest canopy. Our closest extant relatives the s and chimpanzees developed a flexed stance (with clinograde, (sloping) vertebral column) and are more adapted to tree climbing and to quadrupedal locomotion while on the ground. According to a minority of researchers, like humans, they have fused and strengthened wrist bones suggesting a shared period of knuckle walking. [cite web | url = http://education.guardian.co.uk/higher/research/story/0,,2093002,00.html | title = New theory rejects popular view of man's evolution - Research - EducationGuardian.co.uk | accessdate = 2007-11-05 | author = Sample, I. | date = June 1, 2007] [cite web | url = http://news.bbc.co.uk/1/hi/sci/tech/6709627.stm | title = BBC NEWS - Science/Nature - Upright walking 'began in trees' | accessdate = 2007-11-05 | date = 31 May 2007] [cite web | url = http://www.liv.ac.uk/premog/premog-sup-info-SCIENCE.htm | title = PREMOG - Supplementry Info | accessdate = 2007-11-01 | author = Thorpe S.K.S. | coauthors = Holder R.L., and Crompton R.H. | date= | work = Origin of Human Bipedalism As an Adaptation for Locomotion on Flexible Branches | publisher = Primate Evolution & Morphology Group (PREMOG), the Department of Human Anatomy and Cell Biology, the School of Biomedical Sciences at the ]