Point of No Return (film)

Point of No Return (film)

:"For other meanings of "point of no return", see ."Infobox Film | name = Point of No Return 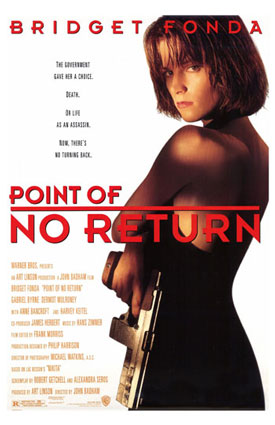 "Point of No Return", known as "The Assassin" in some markets, is a film directed by and starring . It is a of 's film "".

Maggie Hayward (Bridget Fonda) is a drug addict found guilty of murdering a police officer during the burglary of a drugstore in , when the burglary attempt goes sour.

Maggie is sentenced to be executed after several violent outbursts before and during her trial. She is presumed to have died by lethal injection as she is strapped in the chair and urinates on the floor as a sign of her death. However, she later wakes up in a holding cell. A man named Bob () enters and informs her that for all intents and purposes, the girl once known as Maggie Hayward is dead, producing for her photos of her own funeral and burial...in Plot 48 Row 12 of an area cemetery.

Bob informs Maggie that he works for a top secret government agency that wishes to recruit her as an operative, having seen her demonstrate her fighting skills in the courtroom, the compound where she is being held, and at an earlier scene at a police station where she stabs an officer in the hand with a pencil. Maggie resists, but Bob tells her that if she does not comply, she will be executed for real and laid to rest in "Row 48, Plot 12" (discontinuity), as he reminds her that those who care most about her now believe she's dead, thus leaving her with no one to turn to.

Reluctantly, Maggie agrees to cooperate. Her transformation is not without some difficulty, as she becomes frustrated with learning how to use a computer, etiquette, and her incorrigible nature that leads the agency's director Kaufman () to inform Bob that if she doesn't adapt, she will receive a bullet in the brain. Bob takes this information to Maggie, who is finally frightened into submission.

With the help of Bob and another operative Amanda (), she is reincarnated as Claudia Anne Doran, an assassin for the federal government. Her code name is Nina, named after singer ; it is to Simone's music that she listens when she is upset, as did her late mother. As a belated birthday gift, Bob promises her a night out for dinner, after being not allowed outside for a year.

The dinner date, she learns, turns out to be her first mission, when she opens a wrapped package from Bob at the four-star restaurant that turns out to be wooden case containing an expensive semi-automatic pistol. He gives her instructions on whom she is to kill and to carry out her mission after he leaves. Bewildered but without fear, Maggie, now known as Claudia, steps out of her high-heeled shoes and ventures upstairs to carry out her mission. She manages to escape back to the compound with a few cuts and bruises, and angrily assaults Bob for deserting her at the scene. Bob informs her that she's ready for further work now that she's completed her mission successfully.

Claudia is assigned to southern California, where her cover is as a sales executive for a computer company. She performs her assignments well but makes the mistake of falling in love with J.P. (), the manager of the apartment house where she takes up residency. They build a relationship together, but J.P. is constantly frustrated by Claudia's secretive attitude about her past and her job. She does however open up at one point, inviting "Uncle Bob" over for dinner.

When she tries to quit her work as a professional killer it is all she can do to escape with her life. As things progress between her and J.P., she asks Bob for a way out and asks for her help. He refuses. She turns to Amanda, but gets no help from her either. Bob later informs Claudia that if she carries out her next mission successfully, he will try to get her out of the agency.

Claudia agrees, masquerading as Angela (), the girlfriend of Fahd Bakhtiar, () an man trading in s secrets. However, taking out Angela is a problem, resulting in two people dead...one more than the mission called for, and in a bloody mess. Kaufman then sends in Victor (), known as "the cleaner", who does his job armed with a silencer-equipped pistol and two large satchels containing bottles of . When Claudia's assistant panics after being shot and the mission going wrong, Victor shoots her again, this time fatally. Claudia stays calm, knowing that she could meet the same fate.

After the cleaner finishes his work, Claudia dresses up as Angela and heads to Fahd's home. She manages to make it upstairs to where he is bathing, and pulls out a gun. She gets Fahd to unlock his computer and reveal his secrets. However, she hesitates at the moment of truth when it comes time to kill him. Fahd knocks her to the ground, but she manages to escape amid a cascade of bullets by his bodyguards who are armed with semi-automatic rifles. She flees to the car, and she and the cleaner escape.

Claudia sees the gun in Victor's waistband, knowing that he's about to kill her. She reaches for her purse, and as she goes for her gun, Victor grabs his own and the two struggle, resulting in their car crashing through a fence where it gets hung up halfway over a curb overlooking a massive cliffside, with the engine running at full speed in reverse. Both struggle and as Victor attempts to choke Claudia, the car runs over Victor, taking him down the hill with it and crashing at the bottom.

Claudia makes her way back to J.P.'s apartment, but the following morning, J.P. discovers she's gone, leaving her clothes and her possessions behind. Bob arrives at her apartment, where he learns of her disappearance from J.P., who is now convinced that he is not her relative. Bob leaves, and as he pulls away, Claudia watches him leave from outside, keeping herself hidden.

Bob, however, backs his car up, in time to see Claudia walking away. He calls Kaufman to inform him that the cleaner is dead, and hesitates for a moment before telling him that Claudia too is dead. Claudia is then seen walking away and smiling...knowing that she is free at last.

Upon release, the film grossed approximately $30,038,362 () and received mixed reviews. Film critic , who gave the original "Nikita" three and a half stars out of four [ [http://rogerebert.suntimes.com/apps/pbcs.dll/article?AID=/19910403/REVIEWS/104030301/1023 La Femme Nikita review] , Roger Ebert, Chicago Sun-Times, April 3, 1991] , gave "Return" three stars, saying: "Point of No Return" is actually a fairly effective and faithful adaptation, and Bridget Fonda manages the wild identity-swings of her role with intensity and conviction, although not the same almost poetic sadness that brought to the original movie. If I didn't feel the same degree of involvement with "Point of No Return" that I did with "Nikita", it may be because the two movies are so similar in plot, look and feel. I had deja vu all through the movie. There are a few changes, mostly not for the better. By making the heroine's boyfriend a photographer this time, instead of a check-out clerk, the movie loses the poignancy of their relationship; Nikita liked her clerk precisely because he was completely lacking in aggression." [ [http://rogerebert.suntimes.com/apps/pbcs.dll/article?AID=/19930319/REVIEWS/303190301 Point of No Return review] , Roger Ebert, Chicago Sun-Times, March 19, 1993]

The main character of the movie (played by ), has a fascination for the singer/pianist/songwriter . Throughout the movie various songs of Nina Simone are used, namely:
* ""
* "I Want a Little Sugar in My Bowl"
* ""
* "Wild Is the Wind"
* ""Together with the earlier re-release of "" in 1982, this movie helped bring back Nina Simone into the public limelight and make her better known with a younger audience.

The end theme is composed by , who would do music later for blockbusters including The Lion King, , Gladiator, Pearl Harbor, Hannibal, , , , The Da Vinci Code, The Dark Knight.