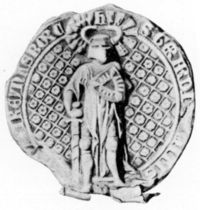 Gerhard III of Holstein (Rendsburg) (about 1292 – April 1, 1340). Sometimes called “Gerhard the Great”. In Denmark also known as “Count Gert” or “den kullede greve” (Eng.: The bald Count). A German prince who was the ruler of most part of Denmark during the Interregnum 1332–1340.

His father was Henry I of Schauenburg and Holstein-Rendsburg (ca. 1258 – 5 August 1304). Gerhard inherited his part of the county of Holstein as a boy but already as a young man he enlarged his heritage by manoeuvring out his relatives and his conquest of other parts of Holstein made him a powerful local prince. In these years he also acted as a paid condottiere for neighbouring kings which made him a mortgagee of for instance King Eric VI of Denmark. He often worked together with his Holstein cousin Count Johan of Plön.

1325 Gerhard began his career in the North by taking over the guardianship for his minor nephew Duke Valdemar of Schleswig. This position made him a possible ally of the dissatisfied Danish magnates and 1326 he dethroned King Christopher II together with the Danish rebels. From then until his death he was a main factor of Danish politics. He placed his nephew on the Danish throne, was made the regent of Denmark and at the same time he secured the separation of Schleswig from Denmark by the so-called Constitutio Valdemariana which made the ground of the long-standing German influence on South Jutland. His lack of ability of creating peace and order led to rebellions and a conflict with Count Johan. As a result Gerhard 1330 replaced Valdemar by Christopher II as the puppet king and after the death of Christopher 1332 he quite simply took over the rule himself.

From 1332 to 1340 Count Gerhard was the real ruler of most of the dissolved country being the lord of both Jutland and Funen, leaving the rest to Johan. He did not try to make himself a king or a regent but seems to have been ruling as a military dictator and mortgagee exploiting his possessions as much as possible. However his position was unsafe because he himself had new creditors who had financed his armies and therefore had a hold on him. The result was a growing opposition against the foreign rule also within the Danish gentry that had earlier supported him. Peasant rebellions and lawlessness at sea created a growing chaos and Gerhard was put under pressure from the German neighbouring states now supporting Christopher’s son Valdemar (afterwards Valdemar IV) who acted as the official pretender. Gerhard seems to have prepared a political climb-down in return for his outstanding debts but before a solution was reached he made a new campaign against rebels in North Jutland in the spring of 1340. Here he was slain in Randers by the Danish squire Niels Ebbesen who entered his bedroom together with some of his men.

His death meant the end of the Holstein rule and his two sons gave up their position in return of a satisfying economic compromise that brought Valdemar on the throne.

Because of his political role Gerhard has been highly variously judged. In Denmark he is traditionally regarded a scoundrel and a “German tyrant” and his murder has been viewed as one of the highlights of Danish history, having inspired Danish poets and authors as late as during the German occupation of Denmark 1940–1945. In the Ditmarshes (Dithmarschen) in which he ravaged he also seems to be unfavourable viewed. In Holstein however he has been something of a national war hero who was almost worshipped as a saint. From contemporary sources he appears an energetic, brutal and deeply religious warrior.