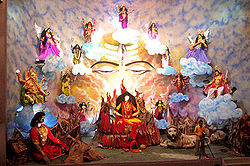 Navadurga (Devanagari:नवदुर्गा), which literally means nine Goddess Durgas, constitute, according to Hindu mythology, the manifestation of Durga in nine different forms. These nine forms of manifestation are Śhailaputrī, Brahmachāriṇī, Chandrakaṇṭā, Kuṣhmāṇḍā, Skandamātā, Kātyāyanī, Kālarātrī, Mahāgaurī and Siddhidātrī[1], together worshipped during the Navratri (Nine Divine Nights) celebration in Autumn each year.

Durga, the Mother Goddess of the Hindus and a form of Devi and Shakti, is believed to have manifested in various forms, and Navadurga Maa are believed to be the most sacred aspects of Goddess Durga. According to a Hindu tradition, it is believed that there are three major forms in which Goddess Durga manifested herself, namely, Mahasaraswati, Mahalakshmi and Mahakali who are the active energies (Shakti) of Brahma, Vishnu and Rudra respectively (without these goddesses the gods will lose all their powers and would not have the energy to lift a finger). These three forms of Durga further manifested in three more forms each, and thus emerged the nine forms of Durga, which are collectively called Navadurga or Nine Durgas. Navadurga are famously worshipped during the Autumn Navaratri or the Nine days, initiating the devotees into a period of festivities according to Hindu calendar.

Science and concept of colors or Gunas in Nav Durga

Actually each Form in Nav Durga represents her special characteristic as per her guna which is in reference with color of their vestments i.e. red, yellow, blue, violet, green, orange, indigo, Grey and pink. Parvati represents white color vestments as white is combination of all colors that is why she is known as trigunatmika, combination of all gunas. Science says when white light goes from rarer (upper lokas like heaven) to denser medium (lower lokas like earth) it transforms to different colors. If density variation is less, then three colors are formed i.e. Red, Yellow and Blue, now the three primary colors represents Mahalakshmi or Mahismardini(Red), Mahasarswati or Shumbh-Nishumbh Vinashni(Yellow) and Mahakali or Madhukaitabh Vibhanjani(Blue), the Goddesses are none other than the powers of trinity. Further these splits to nine colors as their wavelength exceeds and forms above mentioned nine colors of Nav Durga i.e. now Shailputri or Hemavati who is Goddess as Nature represents green color, Brahmacharini represents devotion i.e. indigo color, Chandraghanta reperesents beauty i.e. pink, Kushmanda represents beginning i.e. voilet, Skandmata represents hard worker i.e. yellow, Katyani represents courage i.e. orange, Kaalraatri represents illusion i.e. blue, Mahagauri represents purity i.e. Red, Sidhidhaatri represents granter i.e. grey.

Each one of the Navadurga is known by a particular name and the deity has a particular dhyana-mantra, a mantra for meditation, a free English version of which is mentioned below:

May the illustrious Shailaputri Durga whom I salute and whose head is adorned by a halfmoon, who rides nandi a bull and carries a spear fulfil the desires of my heart. She was her known as 1st phase of Durga when she took birth as daughter of Great Himalyas.

May the supreme Brahmachari Durga, who holds rosary and kamandalu in her lotus hands and whose nature is to attain Sachchidanandamaya Brahmaswarupa the Existence-Knowledge-Bliss absolute, be propitious on me. Devi is Devi's that phase when Maa Parvati before marriage as a Devi Yogni and Devi Tapsvini.

May that Durga Devi, who rides on Tiger, who is endowed with intense anger and violence and is renowned by the name of Maa Chandraghanta, bestow her grace on me. Chandraghanta Ma is known and named Chandraghanta or Chandra-Khanda as Maa Durga wears the semi-circular moon (Chandra) which appears like a bell (Ghanta) on her forehead.

May Kushmanda Ma Durga who holds two pitchers full of blood in her lotus hands and the universe is created, sustained and drawn within Devi's ownself in a wink be propitious for me. In this form Mother Durga creates solar system by liberating her power to Lord Sun.

May the renowned Durga Devi Skandamata who is eternally seated on a throne and whose hands are adorned with lotuses, be ever propitious to me. As Mother of Skanda or Kartikeya, Maa Parvati or Maa Durga is known as Skandmata.

May the ever watchful Durga Devi Katyayani, who holds shining Chandrahasa (Sword) in Devi's hand and rides a magnificent lion and destroys the demons, bestow welfare on me. When Maa PArvati's Partial expansion took birth in Sage Katya's home and gets energy from trinity and demi Gods, then the Goddess the known as Maa Katyani.

May she Bhayankari Maa Durga who is naked with long lips, riding an ass, shining in various hues looks formidable because of the halo of Devi's lustre and is adorned with multi coloured ornaments remove my darkness of ignorance. In skand Purana, Maa Parvati liberates Devi's golden outer sheath and becomes dark comlexioned then Goddess becomes Goddess Kaalratri.

May the Mahagauri Ma Durga who rides a white Rishabha bull and who wears spotless white clothes and remains ever pure and also provides ever lasting bliss to Mahadeva Lord Shiva bestow all auspiciousness. Devi is 16 years old unmarried Goddess Parvati.

May the ever victorious Siddhidayini Ma Durga, who is always worshipped by the hordes of siddha, gandharva, yaksha, asura, and Deva, bestow success at my every venture. She is one who was worshiped by Lord Shiva to become in the form of Goddess Ardhnarishwara, then Goddess Shakti Appeared from the left side of Lord Shiva

Parvati, the Supreme Goddess of Power known as sagun form of Devi Adi-Parashakti primarily gives the concept of Nav-Durga Devi. In Reality Nav Durga are the life phases of Maa Parvati.

1. In beginning When Lord Rudra worshiped Maa Adi-parashakti for creation, Lord Rudra cleared different levels of Shakti and Maa Shakti appeared in 'Saguna' form from the left half of Lord Shiva. The Goddess was Siddhidatri.

2. Then Goddess started living inside center of Sun so that Sun liberates energy by the grace of Goddess, the Goddess is known as Goddess Kashmunda.

3. The same Goddess then took birth in home daksha, Goddess was a great sati and her unmarried form is known as Goddess Brahmacharini.

4. After the self immolation of Maa Sati she appeared as daughter of Lord Himalya, the Goddess is then recoganized as Goddess Shailputri.

5. At the age of 16 Goddess Durga was extremely beautiful and very fair complexion and known as Goddess Mahagauri.

6. When Devi gets married with Lord Shiva, as Lord Shiva, Devi also liked to wear half chandra on her forehead, and recoganized as Goddess Chandraghanta.

7. When Devi became the mother of Lord Skanda or Lord Kartikeya, Devi was then known with name Goddess Skandmata.

8. Then Devi took the form of Goddess Katyani to destroy Demon Mahishasura.