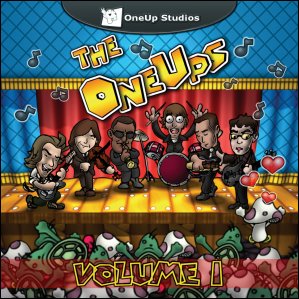 "The OneUps Volume 1" is a of 17 s, contemporary arrangements of the from various soundtracks. A fan-made production, OneUp Studios nonetheless d the use of the original music arranged for the album. The album's catalog number is "OUS-004". The band takes its name from the gaming term , which refers to the gaining of an extra "life" or chance to play--usually one of the more sought-after and difficult-to-obtain bonuses available in a game.

The album is ' first, the band having been in existence for over 3 years and in its fourth incarnation. Promotion for the album was primarily based out of OneUps Studios' website, and supplemented by various tour stops around the United States at video game entertainment events including and , as well as regular performances at the Fayetteville-based restaurant, .

Volume 2 followed with a September 2, , release. [ [http://www.rocketllama.com/articles/A15.html An Interview with The OneUps' Timmy Yarbrough by Alex Langley. " World Headquarters".] ] .