The Massacre at Paris

The Massacre at Paris

The Massacre at Paris is an Elizabethan play by the English dramatist Christopher Marlowe. It concerns the Saint Bartholomew's Day Massacre, which took place in Paris in 1572, and the part played by the Duc de Guise in those events. 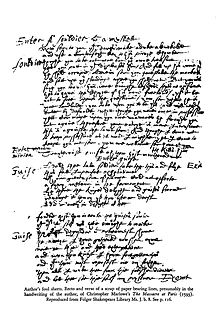 A foul sheet from Marlowe's writing of The Massacre at Paris (1593). Reproduced from Folger Shakespeare Library Ms.J.b.8

The Lord Strange's Men acted a play titled The Tragedy of the Guise, thought to be Marlowe's play, on Jan. 26, 1593. The Admiral's Men performed The Guise or The Massacre ten times between June 21 and Sept. 27, 1594. The Diary of Philip Henslowe marks the play as "ne," though scholars disagree as to whether this indicates a "new" play or a performance at the Newington Butts theatre. The Diary also indicates that Henslowe planned a revival of the play in 1602, possibly in a revised version.[1] A possible revision may have something to do with the surprising number of Shakespearean borrowings and paraphrases in the text.[2]

The only surviving text is an undated quarto that is too short to represent the complete original play and in all probability it is a memorial reconstruction by the actors who performed the work.[3] It preserves a lot of the violence and stabbing jokes but deletes most of whatever social value the play may have had, except for one long soliloquy near the beginning.

One clue to the original substance of the play is a page which survives in manuscript. It is known as the "Collier leaf," after the Shakespearean scholar John Payne Collier, who is known to have been a notorious forger, although modern scholars think that this particular leaf is probably authentic. Despite including a speech where one of the characters mutters obscene jokes to himself before shooting someone, it supplies a much longer and more interesting version of a blank verse speech than appears in the quarto. This suggests that the more thoughtful parts of the play were precisely the ones that tended to be cut.

Jeff Dailey directed a version of the play for The Marlowe Project in New York City in 1999. He transposed some scenes to provide better continuity, and used the extended version of the soldier's speech from the Collier leaf.

A version of the play, with much new material, was written by the leading Australian playwright Tommy Murphy for a production by Australian Theatre for Young People in 2001.