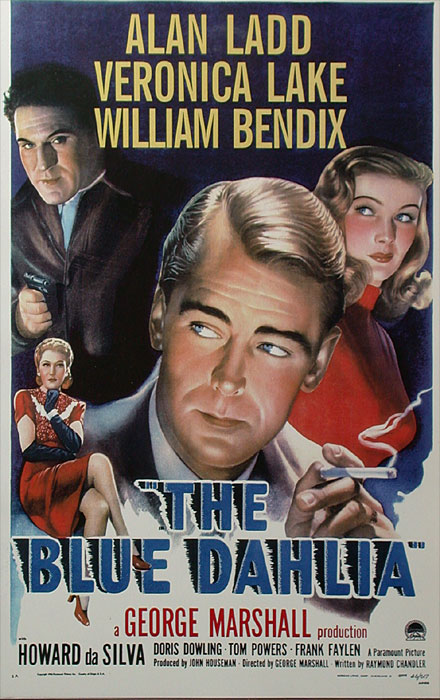 "The Blue Dahlia" (fy|1946) is an American directed by George Marshall and written by . The film marks the third pairing of stars and . [imdb title|id=0038369|title=The Blue Dahlia.]

Johnny () returns home from the military with buddies Buzz () and George () to find his wife Helen () kissing her new boyfriend, Eddie Harwood (), the owner of the Blue Dahlia nightclub.

Helen admits her caused their son's death. George pulls a gun on her but decides she's not worth it. Later, Helen is found dead and Johnny is the prime suspect. Johnny teams up with Joyce (), the estranged wife of Eddie Harwood, to help clear his name.

The staff at "Variety" magazine gave the film a positive review and wrote, "Playing a discharged naval flier returning home from the Pacific first to find his wife unfaithful, then to find her murdered and himself in hiding as the suspect, Alan Ladd does a bangup job. Performance has a warm appeal, while in his relentless track down of the real criminal, Ladd has a cold, steel-like quality that is potent. Fight scenes are stark and brutal, and tremendously effective." [ [http://www.variety.com/review/VE1117789392.html?categoryid=31&cs=1&p=0 "Variety"] . Film review, April 19, 1946. Last accessed: , .]

Critic Dennis Schwartz called the film, "A fresh smelling film noir directed with great skill by George Marshall from the screenplay of Raymond Chandler (the only one he ever wrote for the screen, his other films were adapted from his novels). It eschews moral judgment in favor of a hard-boiled tale that flaunts its flowery style as its way of swimming madly along in LA's postwar boom and decadence." [ [http://www.sover.net/~ozus/bluedahlia.htm Schwartz, Dennis] . "Ozus' World Movie Reviews," film review, , . Last accessed January 18, 2008.]

Real life aspiring actress and 1947 murder victim may have been given the name the "" as a play on this film's title. , the current rights-holder to this film, released "The Black Dahlia" in 2006 based on Short's murder.