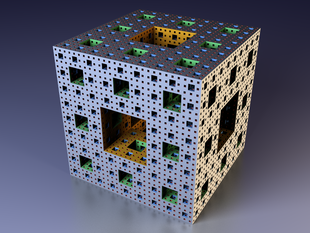 An illustration of M4, the fourth iteration of the construction process.

The construction of a Menger sponge can be described as follows:

The second iteration will give you a level-2 sponge (third image), the third iteration gives a level-3 sponge (fourth image), and so on. The Menger sponge itself is the limit of this process after an infinite number of iterations.

An illustration of the iterative construction of a Menger sponge up to M3, the third iteration.

The number of cubes is 20n, with n being the number of iterations performed on the first cube. 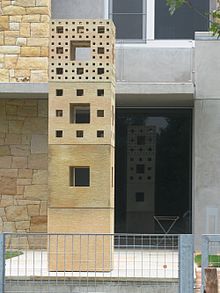 A sculptural representation of the previous illustration.

The Menger sponge is a closed set; since it is also bounded, the Heine–Borel theorem implies that it is compact. It has Lebesgue measure 0. It is an uncountable set.

The topological dimension of the Menger sponge is one, the same as any curve. Menger showed, in the 1926 construction, that the sponge is a universal curve, in that any possible one-dimensional curve is homeomorphic to a subset of the Menger sponge, where here a curve means any compact metric space of Lebesgue covering dimension one; this includes trees and graphs with an arbitrary countable number of edges, vertices and closed loops, connected in arbitrary ways. In a similar way, the Sierpinski carpet is a universal curve for all curves that can be drawn on the two-dimensional plane. The Menger sponge constructed in three dimensions extends this idea to graphs that are not planar, and might be embedded in any number of dimensions.

The Menger sponge simultaneously exhibits an infinite surface area and encloses zero volume. In spite of this, there exists a homeomorphism of the cube having finite distortion that "squeezes the sponge" in the sense that the holes in the sponge go to a Cantor set of zero measure (Iwaniec & Martin 2001, §6.5.6).

Formally, a Menger sponge can be defined as follows:

where M0 is the unit cube and