The Wanda Beach Murders refers to the case of the unsolved murders of Marianne Schmidt and Christine Sharrock at Sydney's Wanda Beach on 11 January 1965. Their partially buried bodies were discovered the next day.

The victims, both aged 15, were best friends and neighbours. The brutal nature of the slayings and the fact that the twin killings occurred on a deserted, windswept beach brought publicity to the case. It remains one of the most infamous unsolved Australian murder cases of the 1960s, perhaps second in notoriety only to the disappearance of the Beaumont children.

Marianne Schmidt had arrived in Melbourne from West Germany with her family in September 1958. At the time, the Schmidt family consisted of parents Helmut and Elizabeth and Marianne's siblings, Helmut Jr., Hans, Peter, Trixie and Wolfgang. Another child, Norbert, was born in Australia the following year. After arriving in Australia, the Schmidts lived in a migrant hostel in Unanderra before settling in Temora. In 1963 Helmut Schmidt moved the family to Sydney after contracting Hodgkin's disease and they found a home in the suburb of Ryde. In June the next year, Helmut Schmidt died[1].

Christine Sharrock lived with her grandparents Jim and Jeanette Taig. Her father had died in 1958 and her mother Beryl had remarried and was living in the north-western Sydney suburb of Seven Hills. Christine had moved in with her grandparents by choice and when the Schmidts arrived next-door she developed a strong friendship with Marianne, who was the same age[2]. 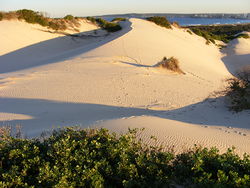 On 1 January 1965, Christine and Marianne visited the beach at Cronulla, which had been a popular picnic spot for the Schmidts. The following day the Schmidt children visited the beach there again without Christine. Elizabeth Schmidt had meanwhile been admitted to hospital for a major operation, leaving Helmut Jr and Marianne in charge of the household. On 9 January, Marianne and Christine asked Elizabeth if they could take the younger children to Cronulla the next day and were given permission; however, rain prevented the trip[3].

On Monday 11 January, accompanied by Marianne’s youngest four siblings, the girls again set off for Cronulla. They arrived at about 11am, but it was very windy and the beach was closed. The group therefore walked down to the southern end of the beach and sheltered among the rocks. Eight-year old Wolfgang Schmidt still wanted to swim however, so Marianne went with him to a shallow part of the surf away from the rocks. After they returned to the group, they had a picnic. At some point during this time, Christine left the others and went off by herself. There is no evidence of her whereabouts during this period, but after her death it was discovered she had consumed alcohol and some food that was different from the rest of the party; it is suspected this occurred while she was alone[4]. It was also during this time that Wolfgang noticed a boy hunting crabs. Later, he claimed to have seen the same boy twice more, once in the company of his sister and Christine and again sometime much later. There has been doubt about his description of this person, as Wolfgang variously suggested he had a homemade speargun, a knife, or both[5][6].

When Christine returned to the group, it was decided to take a walk into the sandhills behind Wanda Beach. Around 1pm, the group had reached a point around 400 metres beyond the Wanda Surf Club, they stopped to shelter behind a sandhill as the younger children were complaining about the conditions. Marianne told her younger siblings that she and Christine would return to the rocky area at the south end of the beach where they had hidden their bags, then return to fetch the children and head home. Instead, however, the girls continued into the sandhills. When Peter Schmidt told them they were going the wrong way, they laughed at him and walked on[5][7].

The Schmidt children remained waiting behind the sandhill until 5pm. They returned to collect their bags and then went home. The girls were reported missing at 8:30pm.

The last official sighting of Marianne and Christine was by local fireman Dennis Dostine, who was walking in the area with his son and saw the girls walking about 800 yards north of the surf club. He told police that they seemed to be hurrying, and one of the girls was looking behind her as if she were being followed. Dostine did not see anybody else.

On Tuesday, 12 January Peter Smith was taking his three young nephews for a walk through the Wanda Beach sandhills. Some distance north of the surf club, he discovered what appeared to be a department store mannequin buried in the sand. He brushed away sand from the hand and realised that it was a body. The police were called from the surf club, however at this point Smith believed he had found only one young woman.

When the bodies were uncovered, Marianne Schmidt was found lying on her right side with her left leg bent. Christine Sharrock was face down, her head against the sole of Schmidt's left foot. From a 34-metre long drag mark leading to the scene, police determined that Sharrock had fled, possibly while Schmidt was dying, only to have been caught, murdered and dragged back to the body of her friend. Attempts had been made to rape both girls. Sharrock's skull had been fractured by a blow to the back of the head and she had been stabbed multiple times. Schmidt's throat had been slashed and she too had been stabbed several times.

Two murders occurred during early 1966 which, police at the time speculated, might have been the work of the Wanda Beach killer.

Cec Johnson, a former detective who had investigated the Wanda Beach murders, was given a painting in 1975 by Alan Bassett. Bassett had been jailed for murdering Carolyn Orphin, a 19 year old woman, in June 1966. Sent to prison for life, he served 29 years before being released in 1995.

Other detectives were far less convinced, but Johnson wrote a book about the case. Before it could be published, however, he was knocked down and killed in an accident. The book was never published. Other detectives, while retaining professional respect for Johnson, concluded that he was wrong in his belief that Bassett was the killer.

One person he convinced, however, was crime reporter Bill Jenkings. Jenkings repeated Johnson’s claims in his ghostwritten memoirs, As Crime Goes By, devoting a whole chapter to the Wanda Beach murders. Most of the chapter was essentially a repeat of what he’d written in his earlier book Crime Reporter, but he mentioned Johnson, Bassett and the painting as well.

Bassett threatened legal action, but Jenkings died shortly afterwards, and Bassett did not go through with his threat. Since his release, Bassett has offered to give DNA to clear his name, but whether or not he has been eliminated as a suspect by DNA has yet to be publicised.

Another suspect, not well publicised until 1998, is Derek Percy. Percy has been imprisoned since 1969 for the murder of a child on a beach in Victoria. He is considered too dangerous to be released and is the prime suspect for a number of other murders of children in Melbourne and Sydney.

A third suspect is Christopher Wilder. Wilder was known to police in Sydney but did not become infamous until he became a serial killer in America in the early 1980s. In the first half of 1984, he committed eight murders and attempted several more. He accidentally killed himself during a struggle with police in New Hampshire on 13 April 1984.

The murders were the focus of the Crime Investigation Australia season 1 episode "The Wanda Beach Murders".[8]