Maine Maritime Academy is a public post-secondary college and nautical training institution with approximately 800 students, located in Castine, Maine. The Academy was established by the 90th Maine Legislature on March 21, 1941. Maine Maritime Academy is a public college. Costs of admission are comparable to the nearby University of Maine. Unlike federal service academies, a congressional recommendation is not required to attend this state school. Students are not obligated to go to sea or into the military after graduation, and a large portion of the graduating class chooses shore side employment, often in maritime related fields or the power generation industry.

Maine Maritime Academy is one of six maritime training colleges in the United States, and one of only two of these maritime academies which fields a Navy Reserve Officers Training Corps (NROTC) unit. The college is affiliated under the New England Association of Schools and Colleges. Maine Maritime Academy is the only business, residence, or organization to receive mail at the US ZIP code 04420. 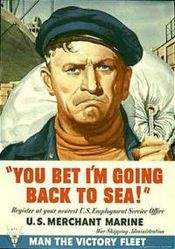 Proposals for an institution devoted to nautical training began in Maine in the 1930s. Educational and civic leaders throughout the state led by Senator Ralph Leavitt of Portland prompted the creation of Maine Maritime Academy by an act of the 90th Maine Legislature on March 21, 1941.

The original class of 29 students reported on October 9, 1941 to Rear Adm. Douglas Dismukes, a veteran of World War I who came out of retirement to head the fledgling school. Classes met on the campus of the Eastern State Normal School, with students lodged at Castine’s Pentagoet Inn. The MATTIE, a coastal schooner out of Camden, Maine, served as the first training ship. World War II required a rapid build-up of the U.S. Merchant Marine, with a critical need for new deck and engineering officers. The academy met that challenge. By war’s end, Maine Maritime had graduated 384 men who served at sea during the war in every theater of operations.

In the post-war era, the program was expanded from the original concept of a three-year course leading to a bachelor of science degree. In the 1960s and 70s, Rear Adm. Edward Rodgers led a multi-million dollar development program, culminating in full membership in the New England Association of Schools and Colleges. In recent years, the college has grown steadily and now offers a total of 17 undergraduate and graduate academic majors, modern training labs and expanded student services.[1]

The academy offers undergraduate bachelor's degrees with a choice of 11 different majors:

Maine Maritime Academy has aggressive co-op and internship programs. Students from all engineering majors and the Marine Transportation Operations major are required to complete at least one co-op. Some majors are required to complete two co-ops. Students in Regiment of Midshipmen have the opportunity and/or requirement to participate in two cruises with the Training Ship State of Maine (TSSOM). Students in the Small Vessel Operations major have the opportunity to sail with the schooner Bowdoin on its yearly training cruise.

Maine Maritime Academy has recently been ranked as one of the nation's top baccalaureate colleges in the 2009 edition of America's Best Colleges by U.S. News & World Report. For the second consecutive year Maine Maritime was placed as 10th overall in the listing of public and private colleges located in the northern region, a region defined by the publication as spanning the eastern coast of United States from Maryland to Maine.[2]

Regimental Preparatory Training (RPT) onboard the State of Maine.

Maine Maritime Academy provides both traditional regimented and nonregimented degrees and programs. The Regiment of Midshipmen is one way to satisfy the U.S. Coast Guard requirement[clarification needed] for a structured lifestyle, though the academy also uses it to promote personal development, leadership and management skills. There are several majors that require involvement in the Regiment, however, a student may belong to the Regiment even if their major does not require it.

The Training Ship State of Maine is the focal point of the Regiment and its primary training aid. All midshipmen regardless of program are familiarized with the ship and assigned areas of responsibility. By learning and maintaining this 500-foot (150 m) diesel powered vessel, midshipmen learn how to operate and manage a technically complex system.

Students not participating in the Regiment of Midshipmen follow a schedule and way of life similar to students at other colleges. They often have classes with students belonging to the Regiment, particularly general-education classes such as Composition and Humanities.

Pentagoet, a tugboat of the Maine Maritime Academy

The college has a 35-acre (14 ha) campus overlooking Castine Harbor, with residential, academic, and shore-based training facilities. Its docks host a fleet of three major vessels, including the historic Arctic schooner Bowdoin, the Training Ship State of Maine (TSSOM) and tug Pentagöet, as well as various minor vessels for training purposes. A major expansion took place from the 1960s–1980s, resulting in a modern campus which complements the town's architecture.