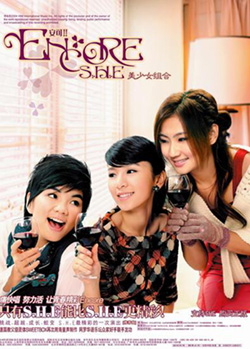 Encore 安可 is 's 7th album. It was released on , . This is the first that released in the , on account of Selina's graduation from university. This album has two versions: Regular Version & DVD Plus Version.

Migratory Bird was penned by Asian superstar Jay Chou and features Chinese music elements. The song would be used as the main theme for the movie, "Goodbye, Quill" (再見了，可魯). [zh icon [http://stars.udn.com/star/StarsContent/Content3107/ Ke Lu is very charming; helps S.H.E talk about movie] . November 3, 2004. Retrieved April 30, 2007.] This song was written on behalf of Ella's previous relationship which had ended on a bad note. Jay Chou composed the song, and it was said that Ella cried when she read the lyrics.Fact|date=November 2007 After "I Love You" was produced, [zh icon [http://www.him.com.tw/artists/down-albums-she-cd07b.htm HIM's official press release for the album "Encore"] . Retrieved January 25, 2007.] Sweetbox re-sang it as "More than Love".

The music video for "I Love You" was filmed in , . There are two versions of the video: a 3-minute TV version, and a 12-minute full version. The 12-minute version features two elderly people who reflect upon their love life back when they were still young. In 1940s Shanghai, the girl tells her lover that her family is moving to Taiwan, likely due to the Chinese Civil War. She gives the boy a box containing her love inside, and leaves in tears. In 1989, the girl, now a grandmother of at least two children, receives a letter from the boy, now a single elderly man. Unlike the grandmother, who seems to enjoy life with her husband, children and grandchildren, the old man has been waiting for the past few decades for his lover to come back to Shanghai. [zh icon [http://music.ent.tom.com/1026/1027/20041129-45410.html S.H.E watches new album's music video with fans; looking back, they feel moved and break into tears] . November 29, 2004. Retrieved April 5, 2007.]

UrbanWire called "Encore" "a refreshing change from the usual tunes you'd find in pop albums," but for first-time fans, the album might seem like "a monotonous compilation of slow songs with a little injection of pop." [en icon Pang Yee Huat. "UrbanWire". [http://www.theurbanwire.com/jan05/sheprint.html S.H.E - Encore: All Rise For The Girls Again.] January 2005. Retrieved April 30, 2007.]