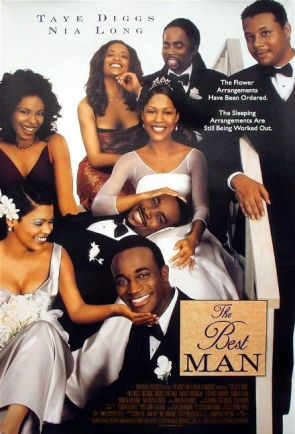 
"The Best Man" is a 1999 romantic comedy-drama film, written and directed by . It was produced by 's (director Malcolm Lee's cousin) production company, . The film stars , , and , and is considered to be a male-centered answer to female-targeted films such as "".

Harper Stewart (Diggs) is a young man living in who is about to hit the big time professionally. His debut novel, ominously titled "Unfinished Business", has been selected by . He has a beautiful and devoted girlfriend, Robin (Lathan), and his best friend Lance (Chestnut) is getting married on the weekend in New York. In an early scene with Harper and Robin lounging in a tub, it becomes clear that all is not well. Robin merely sighs contentedly and idly mentions that she could stay like this forever. For Harper, life is just beginning, and he feels that committing to a woman now that he’s on the verge of success would be a death-knell for him.

To complicate matters further, Harper's new book, which is , has fallen into the wrong hands. Jordan (Long), an old woulda-coulda-shoulda flame of Harper’s, has read an advance copy that seems to be working its way through Harper’s inner circle, coincidentally the other members of the wedding party. In the novel are several unsavory fictionalized characterizations of Harper's real-life friends. These friends all take it in good stride when they talk to Harper face-to-face, but their hurt causes at least one of them to want to teach Harper a lesson. Jordan learns that Harper’s book is unabashedly flattering in its portrayal of a character based on her, however, and she decides to test the waters with Harper at this vulnerable stage.

The film received mostly positive reviews from audiences and critics. The film review website gave the film 3/5 stars, with reviewer Jason Clark stating that while the film has "occasional moments of ripe humor, but it fails to say anything new about troubled weddings or the experience of being an upwardly mobile African-American looking for love." [http://www.allmovie.com/cg/avg.dll?p=avg&sql=1:180990~T1, Allmovie Review] At , the film averaged a favorable 61% rating from critics, and a substantially higher 9.5/10 average from users. [http://www.metacritic.com/video/titles/bestman?q=The%20Best%20Man, Metacritic] It currently holds a 72% fresh rating at , and was deemed "impressive" by the site. [http://www.rottentomatoes.com/m/1093551-best_man, Rotten Tomatoes] Also, the film has earned a B+ average from users at the site. [http://movies.yahoo.com/movie/1800019491/info, Yahoo! Movies] Made on a relatively small budget of nine million dollars, the film went on to make over $34,000,000, nearly four times as much as it cost too produce the picture, by the end of its theatrical run.

The film also went on to receive numerous awards and accolades. 's performance in particular earned much praise from many film critics, and in hindsight "The Best Man" is now considered to be his breakout film. Jason Clark in his Allmovie review even stated that although does good in his first true starring role, Howard "commands the screen with such abandon that one secretly wishes the film could have been all about his oddly captivating character." All eight of the principal cast members received nominations for the film at the 2000 , however only Howard and Long won (the film itself also won Outstanding Motion Picture).

(*): Indicates songs were released as singles