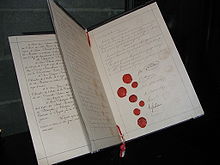 The First Geneva Convention, for the Amelioration of the Condition of the Wounded in Armies in the Field, is one of four treaties of the Geneva Conventions. It defines "the basis on which rest the rules of international law for the protection of the victims of armed conflicts."[1] It was first adopted in 1864, but was significantly updated in 1906, 1929, and 1949. It is inextricably linked to the International Committee of the Red Cross, which is both the instigator for the inception and enforcer of the articles in these conventions.

The First Geneva Convention was instituted at a critical period in European political and military history. Between the fall of the first Napoleon at the Battle of Waterloo in 1815 and the rise of his nephew in the Italian campaign of 1859, the powers had maintained peace in western Europe.[2] Yet, with the conflict in the Crimea, war had returned to Europe, and while those troubles were "in a distant and inaccessible region" northern Italy was "so accessible from all parts of western Europe that it instantly filled with curious observers;" while the bloodshed was not excessive the sight of it was unfamiliar and shocking.[2] Despite its intent of ameliorating the ravages of war the inception of the First Geneva Convention inaugurated "a renewal of military activity on a large scale, to which the people of western Europe… had not been accustomed since the first Napoleon had been eliminated."[2]

The movement for an international set of laws governing the treatment and care for the wounded and prisoners of war began when relief activist Henri Dunant witnessed the Battle of Solferino in 1859, fought between French-Piedmontese and Austrian armies in Northern Italy.[3] The subsequent suffering of 40,000 wounded soldiers left on the field due to lack of facilities, personnel, and truces to give them medical aid moved Dunant to action. Upon return to Geneva, Dunant published his account Un Souvenir de Solferino and, through his membership in the Geneva Society for Public Welfare, he urged the calling together of an international conference and soon helped found the International Committee of the Red Cross in 1863.[4]

The International Committee of the Red Cross, while recognizing that it is "primarily the duty and responsibility of a nation to safeguard the health and physical well-being of its own people," knew there would always, especially in times of war, be a "need for voluntary agencies to supplement… the official agencies charged with these responsibilities in every country."[5] To ensure that its mission was widely accepted, it required a body of rules to govern its own activities and those of the involved belligerent parties. 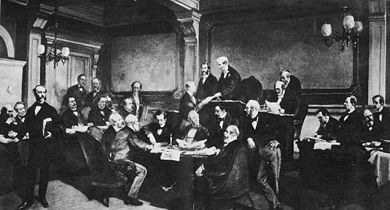 Norway and Sweden signed in December.

Not only was it the first, it was also the most basic and "derived its obligatory force from the implied consent of the states which accepted and applied them in the conduct of their military operations."[2] This first effort provided only for:

Despite its basic mandates it was successful in effecting significant and rapid reforms.

Due to significant ambiguities in the articles with certain terms and concepts and even more so to the rapidly developing nature of war and military technology the original articles had to be revised and expanded, largely at the Second Geneva Convention in 1906 and Hague Convention of 1899 which extended the articles to maritime warfare.[7] It was updated again in 1929 when minor modifications were made to it. However, as Jean S. Pictet, Director of the International Committee of the Red Cross, noted in 1951, "the law, however, always lags behind charity; it is tardy in conforming with life’s realities and the needs of humankind," as such it is the duty of the Red Cross "to assist in the widening the scope of law, on the assumption that… law will retain its value," principally through the revision and expansion of these basic principles of the original Geneva Convention.[1]

The original ten articles of the 1864 treaty[8] have been expanded to the current 64 articles. This lengthy treaty protects soldiers that are hors de combat (out of the battle due to sickness or injury), as well as medical and religious personnel, and civilians in the zone of battle. Among its principal provisions:

For a detailed discussion of each article of the treaty, see the original text[10] and the commentary.[9] There are currently 194 countries party to the 1949 Geneva Conventions, including this first treaty but also including the other three.[11]