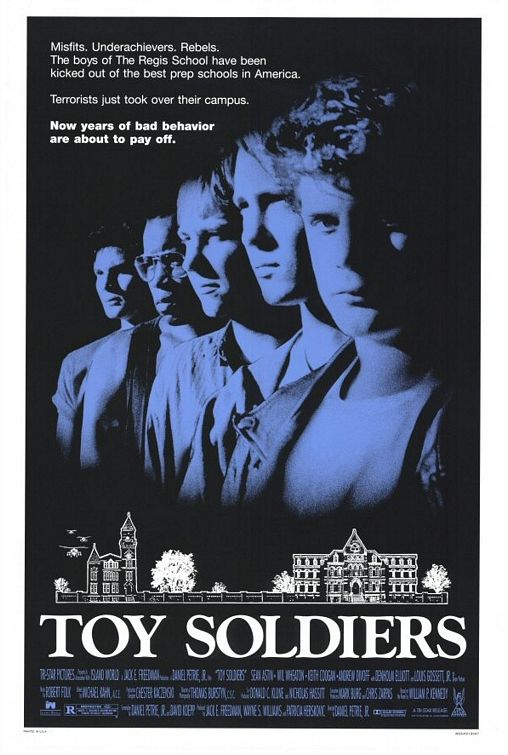 In , a terrorist by the name of Luis Cali has taken over the Palace of Justice. Because the has captured his drug kingpin father, Enrique Cali, and extradited him to the US to stand trial, a furious Luis makes a point by throwing a woman off the balcony, and then tossing a judge from the terrorists' escape helicopter.

In the , the Regis School is a prep school which plays home to many wealthy and rebellious teenagers with important parents who were kicked out of every other school. Some of them even play regular pranks on the staff and local Sheriff, most notoriously a group consisting of students Billy Tepper, Joey Trotta, Hank Giles, Ricardo Montoya, and Jonathan "Snuffy" Bradberry. The teens are watched over by their teachers, especially stern but well-meaning Dean Parker.

Having so far escaped detection during their flight from Colombia, Cali's gang crosses the to the US, in a 2-1/2 ton truck carrying a cache of weaponry. The terrorists are almost apprehended by a US Customs patrol, but Cali's second-in-command quickly uses his MP5SF to silently dispatch the officers.

The father of Phil Donoghue, Billy's and Joey's friend and roommate, is the federal judge that is presiding over Enrique Cali’s trial. In the meantime, a pair of deputy have taken him out of the school so that he and his family could be placed in protective custody for the course of the trial. Unaware that young Donoghue has been removed, Luis Cali invades the school, thinking the son of the judge would be a good bargaining chip. He has his men place explosives all over the school and vows to blow it up if his father is not released. When he finds out that Donoghue is gone, but that the parents of many of the other students are influential social, economical and political figures, he takes the entire student body of the Regis school hostage to give his cause more leverage:

The local Sheriff to negotiate but he is driven off by machine gun fire. After that, US Army and FBI surround the school. Dean Parker advises the federal authorities that the students inside are rebels against authority, but his pleas are ignored. While this is all going on, Billy and his friends decide to covertly fight back against the terrorists. Though Luis Cali's men have imposed strict discipline, such as frequent head counts to discourage escaping, the students under Billy's leadership use their expertise in skirting school administration to get crucial information to the US authorities on the outside. One time, when Billy does sneak out and reach federal authorities, they refuse to allow him to return, but he escapes their custody and returns to school just before a head count.

When Luis Cali realizes that hostage Joey is the son of a Mafia boss, he decides to release him, out of respect for Don Albert Trotta. However, Joey has disowned his criminal father and refuses to leave his dorm-mates who have become close family to him. During a brief scuffle with the terrorists trying to escort him out, Joey seizes an AK-47 assault rifle and tries to shoot his captors, but is unable to control the recoil and is killed by the terrorists. As Dean Parker and others arrive to take Joey's body away, Cali maintains that the death was unintentional. However, the elder Trotta believes that his son's death was in cold blood and directs his gang members in the prison to murder Enrique Cali in retaliation. In turn, the students and US authorities realize that Luis Cali will blow up the school upon hearing news of his father's death, so they draw up an immediate rescue plan.

At dawn, US Special Forces storm the school covertly, first using silenced snipers to pick off the terrorist guards on the roof. Dean Parker also enters the campus on the trail of the US commandos. Billy and his friends meanwhile sabotage the wired explosives, incapacitate several terrorists, and remove the students and headmaster to a secret basement chamber. Cali's men are soon overwhelmed by the assault, with his second-in-command being killed by an 's chaingun, and US troops ling down from a to quickly secure most of the school. Realizing that he is losing and that his bomb detonator is disabled, Luis Cali takes Billy Tepper at gunpoint and holds him in the headmaster's office. However, Parker breaks in and gets wounded by Luis, who is then immediately killed by a US commando. Billy and Dean Parker end up with a better understanding of each other.

*Two of the boys who bought the adulterated mouthwash, (“Mr Burg, Mr Zarpas - Billy Tepper sold you a bottle of with in it... you have until the count of three to hand it out here.”) are named for the two executive producers, Mark Burg and Chris Zarpas.
*The school's exterior scenes were filmed at The Miller School of Albemarle in , USA.
*Other exterior scenes were filmed in , and .
*Astin, Wheaton, Coogan, Russell, and Perez were nominated for “Outstanding Young Ensemble Cast in a Motion Picture” by the s.
*Andrew Divoff has mentioned that his role as Luis Cali was his favourite role as a bad guy.
*Regis High School is a real private school on the upper east side of Manhattan.
*There is a continuity mistake where the lights are on during a bathroom struggle, yet all of the power to the school had been cut in the scenes prior.