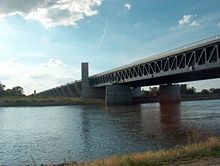 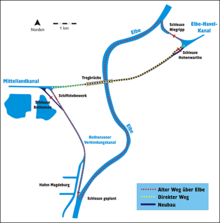 The Magdeburg Water Bridge (German: Wasserstraßenkreuz) is a navigable aqueduct in Germany, opened in October 2003. It connects the Elbe-Havel Canal to the Mittellandkanal, crossing over the Elbe River. It is notable for being the longest navigable aqueduct in the world, with a total length of 918 metres (3,012 ft).[1]

The Elbe–Havel Canal and Mittelland Canal canals had previously met near Magdeburg but on opposite sides of the Elbe, which was at a significantly lower elevation than the two canals. Ships moving between the two had to make a 12-kilometre (7.5 mi) detour, descending from the Mittelland Canal through the Rothensee boat lift into the Elbe, then sailing downstream on the river, before ascending up to the Elbe-Havel Canal through Niegripp lock. Low water levels in the Elbe often prevented fully laden canal barges from making this crossing, requiring time-consuming off-loading of cargo.[2]

Canal engineers had first conceived of joining the two waterways as far back as 1919, and by 1938 the Rothensee boat lift and bridge anchors were in place, but construction was postponed during World War II. After the Cold War split Germany, the project was put on hold indefinitely by the East German government.[2]

The reunification of Germany and establishment of major water transport routes made the Water Bridge a priority again. Work started in 1997, with construction taking six years and costing €500 million. The water bridge now connects Berlin’s inland harbour network with the ports along the Rhine river. The aqueduct's trough structure incorporates 24,000 tonnes of steel and 68,000 cubic meters of concrete.[1][2]

In addition to the bridge, a double lock was constructed to allow vessels to descend from the level of the bridge and Mittelland Canal to that of the Elbe-Havel Canal.

Additionally a single lock was constructed at Rothensee to allow vessels to descend from the bridge level to the Elbe and the Magdeburg harbour. This lock is parallel to, and replaces the Rothensee boat lift, and can accommodate larger vessels than the lift.