Window (computing)
This article is about the graphical display of the functions of a computer. For the operating system, see Microsoft Windows. For other uses, see Window (disambiguation).

An example of some windows in a graphical user interface - GNOME. Two application windows are displayed. Note that one partly overlaps the other.

In computing, a window is a visual area containing some kind of user interface. It usually has a rectangular shape[1] that can overlap with the area of other windows. It displays the output of and may allow input to one or more processes.

Windows are primarily associated with graphical displays, where they can be manipulated with a mouse cursor.

A graphical user interface (GUI) using windows as one of its main "metaphors" is called a windowing system. 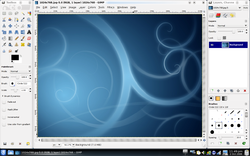 Windows are two dimensional objects arranged on a plane called the desktop. In a modern full-featured windowing system they can be resized, moved, hidden, restored or closed.

Windows usually include other graphical objects, possibly including a menu-bar, toolbars, controls, icons and often a working area. In the working area, the document, image, folder contents or other main object is displayed. Around the working area, within the bounding window, there may be other smaller window areas, sometimes called panes or panels, showing relevant information or options. The working area of a single document interface holds only one main object. "Child windows" in multiple document interfaces, and tabs for example in many web browsers, can make several similar documents or main objects available within a single main application window.

Some windows in Mac OS X have a feature called a drawer, which is a pane that slides out the side of the window and to show extra options without cluttering the main window space.

The idea was developed at the Stanford Research Institute (led by Douglas Engelbart).[2] Their earliest systems supported multiple windows, but there was no obvious way to indicate boundaries between them (such as window borders, title bars, etc).[3]

During the 1980s the term "WIMP", which stands for window, icon, menu, pointer, was coined at PARC.

Apple had worked with PARC briefly at that time. Apple developed an interface based on PARC's interface. It was first used on Apple's Lisa and later Macintosh computers.[1] Microsoft was developing office applications for the "Mac" at that time. Some speculate that this gave them access to Apple's OS before it was released and thus influenced the design of the windowing system in what would eventually be called Windows.[5]

The part of a windowing system which manages window operations is called a window manager.[6]

Examples of some current windowing systems: