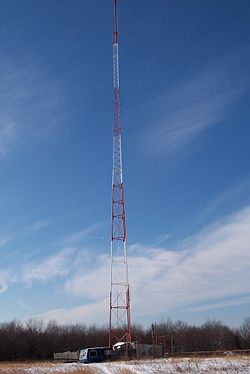 A monopole antenna is a class of radio antenna consisting of a straight rod-shaped conductor, often mounted perpendicularly over some type of conductive surface, called a ground plane. The driving signal from the transmitter is applied, or for receiving antennas the output voltage is taken, between the lower end of the monopole and the ground plane. One side of the antenna feedline is attached to the lower end of the monopole, and the other side is attached to the ground plane, which is often the Earth. This contrasts with a dipole antenna which consists of two identical rod conductors, with the signal from the transmitter applied between the two halves of the antenna. Common types of monopole antenna are the whip, rubber ducky, helical, random wire, mast radiator, and ground plane antennas.

Like a dipole antenna, a monopole has an omnidirectional radiation pattern. That is it radiates equal power in all azimuthal directions perpendicular to the antenna, but the radiated power varies with elevation angle, with the radiation dropping off to zero at the zenith, on the antenna axis.

The general effect of electrically small ground planes, such as used in ground plane antennas, as well as imperfectly conducting earth grounds, is to tilt the direction of maximum radiation up to higher elevation angles.[2]

The ground plane used with a monopole may be the actual earth; in this case the antenna is mounted on the ground and one side of the feedline is connected to an earth ground at the base of the antenna. This design is used for the mast radiator antennas employed in radio broadcasting at low frequencies. At VHF and UHF frequencies the size of the ground plane needed is smaller, so artificial ground planes are used to allow the antenna to be mounted above the ground. A common type of monopole antenna at these frequencies consists of a quarter-wave whip antenna with a ground plane consisting of several wires or rods radiating horizontally from its base; this is called a ground-plane antenna. At gigahertz frequencies the metal surface of a car roof or airplane body makes a good ground plane, so car cell phone antennas consist of short whips mounted on the roof, and aircraft communication antennas frequently consist of a short conductor in an aerodynamic fairing projecting from the fuselage; this is called a blade antenna[1]. The quarter-wave whip and "Rubber Ducky" antennas used with handheld radios such as walkie-talkies and cell phones are also monopole antennas. The hand and body of the person holding them function as a rudimentary ground plane. 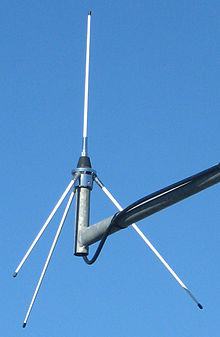 When used for radio broadcasting, the radio frequency power from the broadcasting transmitter is fed across the base insulator between the tower and a ground system. The ideal ground system for AM broadcasters comprises at least 120 buried copper or phosphor bronze radial wires at least one-quarter wavelength long and a ground-screen in the immediate vicinity of the tower. All the ground system components are bonded together, usually by welding, brazing or using coin silver solder to help reduce corrosion. Monopole antennas that use guy-wires for support are called masts in some countries. In the United States, the term “mast” is generally used to describe a pipe supporting a smaller antenna, so both self-supporting and guy-wire supported radio antennas are simply called monopoles if they stand alone. If multiple monopole antennas are used in order to control the direction of Radio Frequency (RF) propagation, they are called directional antenna arrays.

The RF feed-point impedance across this antenna base insulator is well defined and is approximately as shown in the chart. 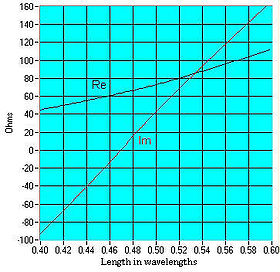 In the United States, the Federal Communications Commission (FCC) requires that the transmitter power input to the antenna be measured and maintained. The power input is calculated as the square of the measured current, i, flowing into the antenna from the transmission line multiplied by the real part of the antenna's feed-point impedance, r.

Examples of monopole antennas are:

Monopole antennas have become one of the mainstay components of mobile and internet networks across the globe. Their relative low cost and fast installation makes them an obvious choice for developing countries.