Marge Gets a Job

Marge Gets a Job

"Marge Gets a Job" is the seventh episode of The Simpsons' fourth season. It was first broadcast on November 5, 1992 on Fox. In this episode, Marge gets a job at the Springfield Nuclear Power Plant to pay for foundation repair at the Simpson house. Mr. Burns develops a crush on Marge after seeing her at work and attempts to woo her. A subplot with Bart also takes place, paralleling the fable The Boy Who Cried Wolf. It was written by Bill Oakley and Josh Weinstein and directed by Jeffrey Lynch.

Homer and Marge discover one side of their house is sinking, and that it needs a foundation repair. Homer tries to repair the house on his own, but is unsuccessful. Homer decides to call a foundation repairman and finds out that it will cost $8,500 for the repairs. Homer and Marge go to a party for the forced retirement of Springfield Nuclear Power Plant employee Jack Marley. Marley does not want to retire, and the retirement party entertainment is filled with music praising Mr. Burns. With Marley's position open at the power plant, Marge decides to apply for it to get the money for the foundation repair. Thanks to Lisa's creative and very impressive résumé, Marge gets the job at the power plant. Homer is worried about working in the same place as Marge.

Bart does not want to take a make-up test at school, so he fakes a stomachache. Mrs. Krabappel asks if Bart has ever read The Boy Who Cried Wolf. From his office, Mr. Burns watches surveillance footage of his plant without enthusiasm. When Marge appears, however, he is enamored and begins a crusade to win her affection. He begins to take her advice on ways to cheer everyone up around the plant, "Funny Hat Day" and playing Tom Jones's music over the plant's speakers.

Bart returns to school, but when Mrs. Krabappel suggests that he take a make-up test, he immediately begins to groan. Grandpa comes to pick him up and on the way home, references The Boy Who Cried Wolf. Again, Bart is unfazed. When he returns to school once more, he is forced to take the make-up test. He begins to protest, but Mrs. Krabappel is unimpressed. She places him alone outside the classroom, hands him the test, and leaves.

At Krustylu Studios, the taping of Krusty the Clown's latest show is not going well. A wildlife expert is visiting, and with her is a large hawk and an Alaskan timberwolf, who she warns is spooked by loud noises. Unfortunately for the wolf, "loud" is the secret word of the day. Celebration and noise ensues, and the terrified animal panics and escapes the studio.

The wolf runs to Springfield Elementary School, where it attacks Bart outside the classroom. He cries "Wolf!" but Mrs. Krabappel ignores his pleas. Eventually, Groundskeeper Willie rescues Bart by attacking the wolf, telling Bart to return to his classroom. Since he feels that he will not be believed that he was attacked by a wolf, Bart decides to say that he made it up, thus showing a "little honesty" to Mrs. Krabappel. He then passes out on the floor. Grandpa takes him home, while Willie gives the wolf some alcohol and consoles him about losing.

Mr. Burns attempts with the help of a hostage Tom Jones, to seduce Marge. When she tells him that she is married, he fires her. She threatens a lawsuit and enlists the help of Lionel Hutz, who is completely unsuccessful and runs yelping from Mr. Burns's squad of real lawyers. Mr. Burns has a change of heart after seeing how Homer would stand up for Marge. The episode ends as Homer and Marge enjoy a private show performed by the chained-up Tom Jones. 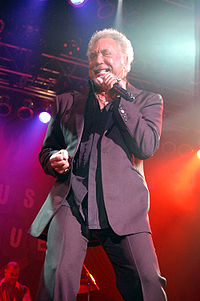 The idea for the show came from Conan O'Brien, who thought of Marge getting a job at the power plant and that Mr. Burns has a crush on her.[1] The animators had trouble animating Marge with the suit and lipstick.[2] Director Jeff Lynch said there were a few scenes where Marge "looks like a monster".[2] All the jargon used by Troy McClure was accurately taken from a Time–Life foundation repair book.[3] The original subplot for the episode was Mr. Burns telling Homer to dress up as Mister Atom and have him go to schools to talk to the children.[2] The cast really liked Tom Jones as a guest star.[3] They said he was fun to work with, and was really nice, and even offered to perform a concert after he was done recording lines.[3] The scene on the Krusty the Klown show where they had guest animals is a parody of the guest animals on The Tonight Show with Jay Leno.[3]

The animators had originally drawn three different versions of Bart after he was attacked by the wolf.[3] They picked the version that looked the least scary, as they did not want Bart to look too "beaten up".[3] An animation error during the dream sequence with Mr. Burns also caused issues when dealing with network censors, mistaking a "lump in his bed" which was supposed to be Mr. Smithers' knee as an erection.[4]

The song performed for Mr. Burns at the retirement party is a reference to Citizen Kane.[3] The photo of Mr. Burns meeting Elvis is very close to the photo of Richard Nixon meeting Elvis.[3] While Mr. Burns is looking through the surveillance cameras, "The Imperial March" from the Star Wars films is being played in the background.[3]

In its original broadcast, "Marge Gets a Job" finished 25th in ratings for the week of November 2-8, 1992, with a Nielsen rating of 13.6, equivalent to approximately 12.7 million viewing households. It was the highest-rated show on the Fox network that week, beating Beverly Hills, 90210 and The Simpsons episode "Itchy & Scratchy: The Movie", which aired on Tuesday in the same week.[5] Warren Martyn and Adrian Wood, the authors of the book I Can't Believe It's a Bigger and Better Updated Unofficial Simpsons Guide commented, "We like Bart's fantasy of the radioactive Marie and Pierre Curie, and Smithers' fantasy of his loved one flying through the window. A collection of wonderful set pieces rather than a story, which fizzles out without any real attempt at an ending."[6] Empire placed the "Mister Burns" dance member as the show's fourth best film parody, "the pick of a big bunch" from the show's many Citizen Kane parodies, coming "replete with Wellesian camera angles and subtly altered lyrics".[7]

In the original airing of this episode, Mrs. Krabappel names several different diseases Bart has faked in order to get out of taking his English test, one of which is Tourette's syndrome. After Bart claims that he is not over it, he begins barking and snarling and mutters, "Shove it, witch!"[8] This scene garnered many complaints from people who thought it was tasteless of the writers to make fun of an actual condition[8] and Joshua Smith, a boy in Renton, Washington began seeking legal action. Smith demanded that they "not repeat the episode and have Bart Simpson befriend somebody with Tourette's on the show" and include an apology from Bart at the end.[9] Executive producer Mike Reiss replied with an apology saying "We kind of feel like we made a mistake this time. We felt bad about this."[8] In a move that was unprecedented for the show, the producers agreed to remove the scene from future broadcasts.[9] However, Smith's other requests went unfulfilled.[10] In the version of the episode released on season four DVD boxset, the part with Bart demonstrating his supposed Tourette's syndrome to Mrs. Krabappel was kept intact, but Krabappel's line about Bart having "...that unfortunate bout of Tourette's syndrome" was replaced with "...that unfortunate bout of rabies."[11]

Additionally, during Mr. Smithers' dream sequence with Mr. Burns, censors demanded the cutting of several seconds of animation that showed "Mr. Burns land[ing] in a particular position on Smithers anatomy".[1]

Following the 2011 Tōhoku earthquake and tsunami and the associated nuclear emergency, the episode was pulled from an Austrian network due to jokes about radiation poisoning.[12]