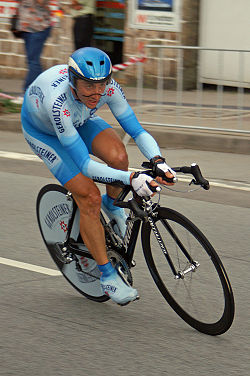 Davide Rebellin (born 9 August 1971 in San Bonifacio, province of Verona) is an Italian road bicycle racer, currently riding for the Italian Miche-Guerciotti team. He served a 2-year suspension for testing positive for Mircera at the 2008 Olympic Games.[1] He is best known in the cycling world for his 2004 season, when he won a then unprecedented treble with wins in Amstel Gold Race, La Flèche Wallonne and Liège–Bastogne–Liège. He is considered one of the finest classics specialists of his generation with more than fifty top ten finishes in UCI World Cup and UCI ProTour classics.[2] Throughout his career he has also won a stage in Giro d'Italia and stage races like Paris–Nice and Tirreno–Adriatico.

Rebellin turned professional in 1992 and came to the attention of the cycling world with a string of strong performances during his early years. In 1996 he gained further notice when he thrived in the 1996 Giro d'Italia. Riding for Polti, the young Italian took stage seven and with it the maglia rosa. He held the leader's jersey for six days and finished the Grand Tour sixth overall. Years later he said of the race, "I have won Classics, but the first important win was in the 1996 Giro, winning the maglia rosa with the stage."[3]

In 1997 he scored his first UCI World Cup victories by winning the Clásica de San Sebastián and the Züri-Metzgete (then known as Grand Prix de Suisse). The following years he won many Italian classic races like Giro del Veneto and Tre Valli Varesine. In 2001 he won the Tirreno–Adriatico stage race.

During 2004 season he got seven victories, including an, at that time, unprecedented treble win in the Ardennes classics with wins in Amstel Gold Race, La Flèche Wallonne and Liège–Bastogne–Liège. Only Philippe Gilbert has repeated this feat in 2011. He also scored a number of podium places in top races such as Paris–Nice and Clásica de San Sebastián. Despite his stellar achievements, Rebellin did not win the 2004 UCI Road World Cup, which went to Paolo Bettini.

In 2005, Rebellin fell short of his triumphs in 2004, but posted yet another solid year. Although he generally concentrated on classics and small tours, he was part of the Gerolsteiner team in the 2005 Tour de France. With a number of solid performances throughout the season, without any individual victories, Rebellin finished as the 3rd highest ranked rider in the UCI ProTour rankings. Apart from the ProTour races, he only won one race in the 2005 season, taking the first stage of the Brixia Tour.

Rebellin triumphed early in 2008 with an overall victory in the Paris–Nice. He won the stage race by 3 seconds ahead of Rinaldo Nocentini.[4] He went on to win the Tour du Haut Var and show strongly in the Ardennes classics with a second place in the Liège–Bastogne–Liège.

Rebellin won the silver medal in the Men's road race at the 2008 Summer Olympics in Beijing. He was a member of a six-man breakaway group and claimed second place in the sprint finish. This medal has now been revoked in light of his doping sentence by the International Olympic Committee.[5]

In April 2009, the IOC announced that six athletes had tested positive during the 2008 Summer Olympics, without mentioning names or sports. Later, rumours emerged that the athletes included two cyclists, one of them a medal winner.[6] The Italian Olympic committee then confirmed that a male Italian cyclist had tested positive for CERA during the men's road race, without identifying a name. The next day, on 29 April 2009, the Italian Olympic committee confirmed that Rebellin was an involved athlete. Rebellin's agent sent a request for the analysis of the B sample[7] [8] which was later also confirmed to be positive.[1]