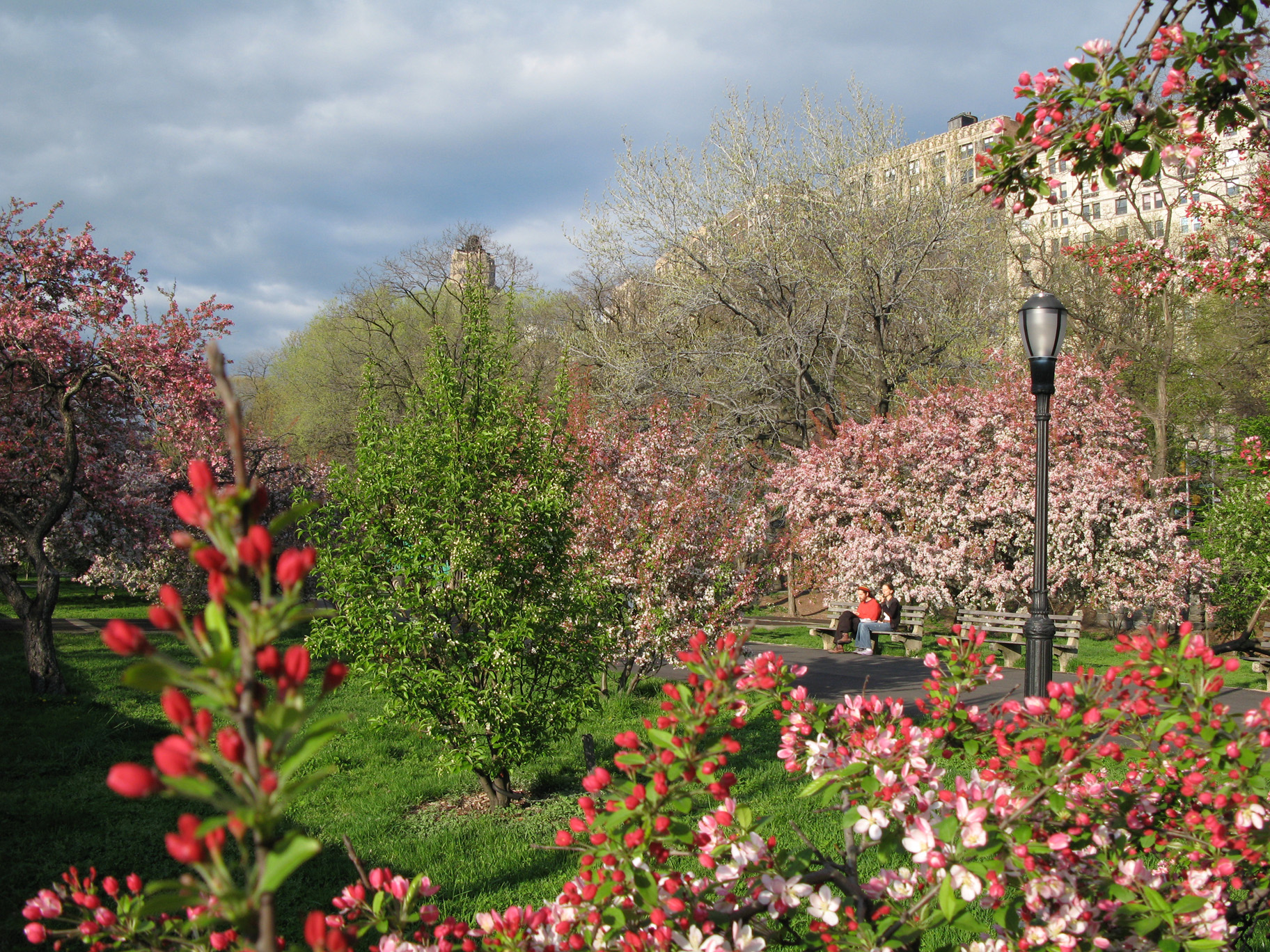 Riverside Park is a scenic waterfront public park on the of the borough of in , operated and maintained by the . The park consists of a narrow four-mile (6 km) strip of land between the and the gently curving rise-and-fall of Riverside Drive. When the park was first laid out, access to the river was blocked by the right-of-way of the West Side Line; later it was covered over with an lined with s. It also contains part of the which encircles Manhattan's waterfronts, with car free bike routes.

Construction of the park began in the early 1870s. The concept plan was drawn by , designer of the nearby . Primary construction was completed in about 1910.

In the 1930s, completed the "Westside Improvement Project" which greatly improved the park, which had become a haven for squatters. Moses's project, which included construction of the , called for covering the rail line. The park and the parkway were done so skillfully that the public is generally unaware that a rail track now used by is underneath. The project, which cost more than $100 million in the 1930s, was twice as big as the project.

Moses described the area before his project as:

:"a wasteland six miles (10 km) long, stretching from where he stood all the way north to 181st street...the 'park' was nothing but a vast low-lying mass of dirt and mud. Unpainted, rusting, jagged wire fences along the tracks barred the city from its waterfront...the engines that pulled trains along the tracks burned coal or oil; from their smokestacks a dense black smog rose toward the apartment houses, coating windowsills with grit... [a stench] seemed to hang over Riverside Drive endlessly after each passage of a train carrying south to the slaughterhouses in downtown Manhattan carload after carload of cattle and pigs." [Robert A. Caro, "The Power Broker: Robert Moses and the Fall of New York," pp. 65-6]

In the 1990s, and a group of Hong Kong investors agreed to expand the park by 23 acres from 72nd to 59th Street (called "Riverside Park South"). This land was originally part of the freight rail yards (but seldom used since the 1968 merger of the financially ailing and ). The new park is part of the development of , the biggest private real estate venture in New York City. Portions of the former rail yard, such as the are incorporated into the park.

With the addition of Riverside Park South and , created between Battery Park and 59th Street as part of the 1990s improvement, a continuous right-of-way for pedestrians and bicyclists now stretches the length of Manhattan from north to south.

The most used sections of Riverside Park are on the tiered slopes between the Hudson and Riverside Drive from 72nd Street to 125th Street. Riverside South extends to the south from 72nd to 59th Street on the former Penn Central yards, with an old locomotive on display. Riverside South connects to the and which goes all the way south to the tip of Manhattan. There is also a northern section of the park from 145th St. to 155th St. and adjacent to . Paths along the river connect the park to to the south and Fort Washington Park to the north. The portion from 181st Street to Dyckman Street, including Inspiration Point, fell into direpair and disuse in the late 20th century, and was restored at the turn of the century.

Notable monuments and statues in the park include the Monument at 72nd Street (, sculptor), the Soldiers and Sailors Monument at 89th Street, the statue at 93rd Street (, sculptor), and Grant's Tomb, New York's version of the . The numerous recreational facilities include , and courts; fields, and a skate park that opened in the summer of 1995 at 108th St. There is a marina at 79th Street and also a kayak launch at 148th St. Before the park existed, liked to sit on rocky "Mount Tom" at 83rd Street. [Arthur Hobson Quinn and Shawn Rosenheim, "Edgar Allan Poe: A Critical Biography" 1997: "a rock overlooking the Hudson, known as "Mount Tom," where he would spend hours gazing at the river."]

Riverside Park almost received a children's playground designed by the great poets of Modernist style, the architect and the sculptor/architect working in collaboration. Despite their redesigning this playground five times between 1961 and 1966, neighborhood resistance triumphed and the project was canceled by the new administration of Mayor .
* [http://www.noguchi.org/intextpub.html#riverside Noguchi's notes recall the unrealized project.]

Riverside Park also almost received a monument to the . A granite plaque was set in the paving at the end of the Promenade near 84th St. on , . It reads::"This is the site for the American memorial to the heroes of the Warsaw Ghetto Battle April-May 1943 and to the six million Jews of Europe martyred in the cause of human liberty."
* [http://www.columbia.edu/acis/textarchive/cjas/11/14.html Wayne Jebian, "The Missing Monument," 1995]

Riverside Park is enjoyed by New Yorkers and tourists of all ages. A bicycle / skating pathway, part of the , leads from 125th Street to 72nd Street. During the spring and the summer, there is also a free kayak rental at the lower tip of the park. Kayaks may be rented only on weekends, weather-permitting. There are also many softball/baseball fields under renovation in time for the spring of 2006. Riverside Park is a getaway from distracting city life, and it is an asset for the Upper West Side of Manhattan.

Some scenes were filmed, including the infamous climatic gun battle took place in "Riverside Park" in the 1974 cult classic film, "".

One of the more memorable street gangs from the 1979 film "The Warriors", the "Baseball Furies" hail from Riverside Park. The park itself featured in two scenes from the film. Once where it was meant to be Van Cortlandt Park, another as the actual park when the Warriors are being chased by the Furies.

The "" episode "The Frogger" revolved around Jerry not wanting to go near a girlfriend's apartment near Riverside Park because of a serial killer named "The Lopper" who killed in the area.

*The : a shelter for the homeless and monument to the beauty of in Riverside Park
*, a wild turkey resident in the park