A chiral auxiliary is a chemical compound or unit that is temporarily incorporated into an organic synthesis so that it can be carried out asymmetrically with the selective formation of one of two enantiomers[1][2] . Chiral auxiliaries are optically active compounds and introduce chirality in otherwise racemic compounds. The temporary stereocenter then forces the asymmetric formation of a second stereocenter using steric hindrance or directing groups to determine chirality. After the creation of the second stereocenter the original auxiliary can be removed in a third step and recycled.

Chiral auxiliaries were introduced by E.J. Corey in 1978 with chiral 8-phenylmenthol and by B.M. Trost in 1980 with chiral mandelic acid. The menthol compound is difficult to prepare and an alternative is trans-2-phenyl-1-cyclohexanol introduced by J. K. Whitesell in 1985.

A good example of chiral auxiliaries are the class of Evans auxiliaries comprising oxazolidinones substituted at the 4 and 5 positions. Through steric hindrance, the substituents direct the direction of substitution of various groups. The auxiliary is subsequently removed e.g. through hydrolysis.

The α-proton of the carbonyl compound is easily deprotonated by a non-nucleophilic base to give the enolate, which can further react. The configuration of the addition compound, such as with an alkyl halide, is directed by the methyl group. Thus, any addition product will be anti to the methyl and syn with the hydroxyl group. The pseudoephedrine chiral auxiliary is subsequently removed by cleaving the amide bond with an appropriate nucleophile.

In the original work by Myers (1994) one of the substrates was propionic acid: 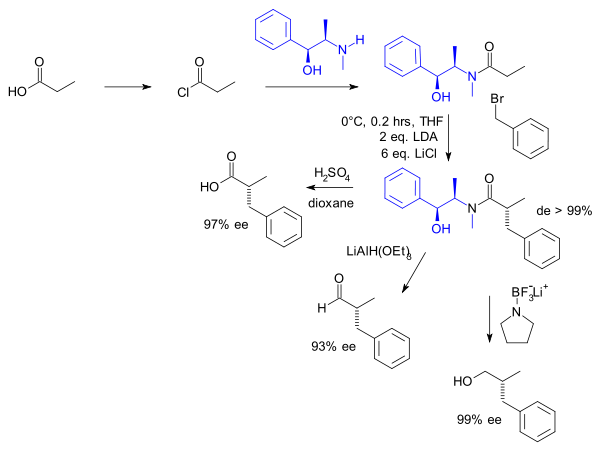 The amide not only can be hydrolysed but also reduced to the aldehyde (Lithium aluminium hydride alkoxide) or to the alcohol (borane complex with Pyrrolidine).

In one study the chiral auxiliary is (-)-ephedrine:[4]