Mary Marshall Dyer (1780-1867), was a voice for the largely forgotten Anti-Shakerism sentiment in rural New Hampshire. In 1813 she joined the Shakers of Enfield, New Hampshire. It took only two years later for her to leave and blame them for alienating her from her children. Despite that, her husband and her family decided to stay. This irritated her so she did tours and wrote tracts against the Shakers. The main writings she did were A Brief Statement of the Sufferings of Mary Dyer and A Portraiture of Shakerism in 1822. She also got a mob together to storm the Enfield Shaker Community to take her children back, but this effort failed. One problem she had was that her husband Joseph remained devout to the community and criticized her in strong terms. Another was that only one of her five children ever left the Shakers, and he never became close to her. By the 1850s her anti-Shakerism seemed extreme, in New England at least, and she died as a largely forgotten figure in 1867.

She is the earliest known example of an activist working to counter the practice of what today is commonly known as "parental kidnapping" or "parental child abduction." Unlike others who also published books on Shaker-related parental kidnappings and lobbied for laws against such practices involving Shaker parents (Capt. Joseph Smith, 1810; Eunice Chapman, 1819), Mary took an active part in assisting others involved in such cases and in educating the public about the overtly anti-family ideology and activities of the Shakers. Her activism reached from 1815 until her death in 1867. 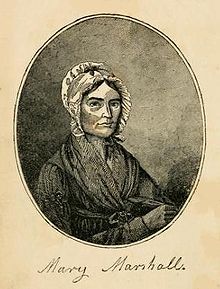 Dyer, Mary M. (as Mary Marshall), A portraiture of Shakerism, exhibiting a general view of their character and conduct, from the first appearance of Ann Lee in New-England, down to the present time, Printed for the Author [Concord, N.H.], Jun. 1823 (“1822”), 446 pp

Dyer, Mary M., Reply to the Shakers' statements called a "Review of the Portraiture of Shakerism," with an account of sickness and death of Betsy Dyer; a sketch of the journey of the author and testimonies from several persons, 1824, Marshall (Concord, N.H.), 112 pp.

Dyer, Mary M., The Rise And Progress Of The Serpent From The Garden Of Eden, To The Present Day: With A Disclosure Of Shakerism, Exhibiting A General View Of Their Real Character And Conduct--From The First Appearance Of Ann Lee. Also, The Life And Sufferings Of The Author, Who Was Mary M. Dyer, But Now Is Mary Marshall, Concord, N.H., 1847, 269 pp.

Dyer, Joseph, A compendious narrative, elucidating the character, disposition and conduct of Mary Dyer from the time of her marriage, in 1799, till she left the society called Shakers, in 1815, with a few remarks upon certain charges which she has since published against that society. Together with sundry depositions, [Feb.] 1819 (“1818”), Concord [N.H.], Printed by Isaac Hill for the author, Concord, N.H., 88 pp. (Early American Imprints: 43899; 47864); 2nd edition, 1826, Pittsfield