I Can Only Imagine

I Can Only Imagine

Infobox Single
Name = I Can Only Imagine 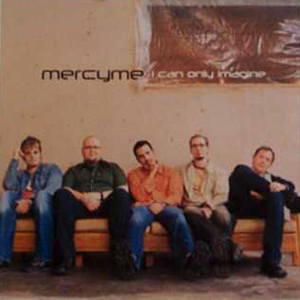 "I Can Only Imagine" is a song recorded by group . Released on MercyMe's debut album "Almost There", the song received major airplay on both Christian and mainstream radio. It earned three Dove Awards in for "Pop Song", "Song of the Year", and "Songwriter of the Year" for its author and MercyMe lead singer Bart Millard. The song is also their only single to date to receive significant airplay on Country radio, peaking at #52.

Mercy Me's vocalist , whose father died in due to cancer, wrote the song in by drawing on his thoughts and personal faith about what one would experience upon meeting in .

The song attained the No. 1 spot on Christian radio in and churches began using the song in their worship services, but it was in when the song gained airplay on secular radio to impress the crowd. radio station 100.3 Wild-FM's morning show "The Fitz Radio Program" first played the song upon a caller's requests and the producer Tony Russell's urgings. It became one of the most requested songs not only at the Dallas radio station but also at radio stations across the as the band's label, INO Records, partnered with Curb Records to publicize the song.

The song was originally given to , who revised the lyrics and recorded it as "Imagine". Following the band's record contract, Grant decided to delay her own release of the song to allow MercyMe the chance to record and promote it as their own single first. Grant's version was later combined with "Sing the Wondrous Love of Jesus" and released on her album, "".

Quotations about "I Can Only Imagine"

"Regardless of what the message is, it's just a good song. If you're writing good music, you have a chance just like everyone else. Don't throw us a bone and play the song to clear your conscience -- play the song because it's a good song!" -- Bart Millard, in an interview for "ASCAP Playback" Fall 2003