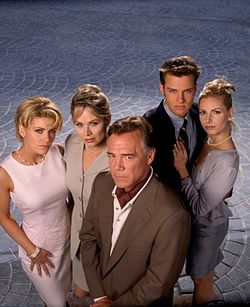 The Crane family is a fictional family on the NBC/DirecTV soap opera Passions. Seated at 14 Raven Hill Road atop Raven Hill in Harmony, New England, the wealthy Crane family amassed its fortune during the eighteenth century via the slave trade, amongst other things. The Crane family wealth is now garnered from Crane Industries, a global corporation, which does a number of things, including shipping and fishing. Over the years, the Cranes have intermarried and reproduced with a number of notable families from Harmony and New England, including the Barretts, the Winthrops, the Lopez-Fitzgeralds, the Bennetts, and the Russells.

The affluent and renowned Crane family emigrated from Great Britain in the seventeenth century, eventually settling in the coastal New England village of Harmony over three hundred years ago. The Cranes gained a great deal of influence in village affairs by the end of the century. In 1693, magistrate William Ephraim Crane ordered the execution of accused witch Tabitha Lenox after hearing testimony from the young Prudence Standish; as a result, Tabitha has long since held a grudge against William's descendants.

The Cranes first began to amass their multibillion dollar fortune in the eighteenth century through their participation in the Atlantic slave trade; further wealth was derived in the early twentieth century by illegally smuggling alcohol into the United States during the Prohibition and through other unpalatable activities. In more recent generations, the Cranes' main source of reported income has been derived from Crane Industries, the family-run international conglomerate.

Upon the debut of Passions in July 1999, the Crane family consists of patriarch Alistair; his two children, Julian and Sheridan; Julian's wife, Ivy, and eldest child, Ethan; and Ethan's girlfriend, Gwen. The Cranes are quickly established to be a dysfunctional bunch; Julian and Ivy, despite over two decades of marriage, bitterly despise one another and never, during their two years of marriage seen on-air, engage in sexual intercourse with one another, and patriarch Alistair seeks numerous times to murder Sheridan, his own daughter, often enlisting Julian's help in achieving his goal.

The Crane family seems to have largely fallen apart by early 2002 — Ethan, the heir apparent to the empire, is revealed to be the product of Ivy's adulterous affair with police chief Sam Bennett in early 2001, leading Julian to divorce Ivy in August, and Sheridan and Julian are both apparently murdered in August 2001 and January 2002, respectively. Following Julian's murder, Alistair is the only remaining member of the Crane family left until Theresa Lopez-Fitzgerald has herself declared the legal Mrs. Julian Crane and takes control of Julian's estate. Theresa eventually gives birth to Julian's son, Ethan Martin Crane, in June 2002, and both Julian and Sheridan are later discovered to be alive later that summer. Theresa continues to hold control of much of the Crane estate, however, until her Bermudan wedding to Julian is revealed to have been a practical joke in March 2003.

In 2002, the writers begin introducing Julian and Ivy's frequently mentioned but heretofore never seen children into the program's storylines. Julian and Ivy's only son, Nicholas Foxworth "Fox" Crane, returns to Harmony in December 2002, followed by his eldest sister, Fancy, in June 2005. Julian and Ivy's third and final child, their youngest daughter, Pretty, returns to Harmony in July 2007 in order to seek revenge against her sister for a fight a decade earlier that left Pretty's face partially disfigured. Julian and Sheridan each welcome the birth of children in the following years — Julian has a daughter, Endora Lenox, with Tabitha in July 2003, while Sheridan gives birth to son Marty Lopez-Fitzgerald in September 2003 and then adopts then-husband Chris Boothe's son, James, in late 2006.

Both Alistair and Julian also learn that they have fathered children with other women. When Julian learns that his son with Eve did not died shortly after birth as had been previously believed, the two set out to find their child, and Alistair eventually reveals the boy to be Chad Harris, who was engaged to Eve's eldest daughter, Whitney Russell. In June 2006, however, Chad learns that his biological parents are actually Alistair and Eve's adoptive half-sister, Liz Sanbourne, and Julian and Eve learned in July 2007 that their son is the intersex Blackmailer that has been terrorizing most of Harmony, Vincent Clarkson; Vincent, as his female persona of Valerie Davis, sleeps with and bears his father's son in May 2008. Alistair also discovers in spring 2005 that his one-night stand in the 1970s with then-Harmony harlot Edna Wallace produced a daughter, Beth.

As of the series finale in August 2008, the only current Crane family members living in Harmony are Julian, Sheridan, Fancy, Endora, Julian and Vincent's unnamed son, and Marty. Chad and Fox are murdered in August and September 2007, respectively, and Whitney moves with her and Chad's young son, Miles, to New Orleans. Beth is also killed in July 2006 in Rome, and custody of Sheridan's adoptive son, James, rests with the boy's father, Chris. Alistair, meanwhile, is murdered once-and-for-all in May 2008; that same year, Pretty is revealed to be suffering from a mental disorder in June and sent away to a mental institution, and Vincent is revealed to be alive and arrested for his crimes in July.

Being a "true Crane"

Central to several of the soap's storylines is the concept of being a "true Crane". A true Crane is considered to be a Crane who behaves in the Machiavellian manner of his or her Crane ancestors, ruthlessly and single-mindedly stopping at nothing in order to achieve his or her goals while failing to consider or care about how others will be affected; for example, the Cranes, according to Alistair, have a history of patricide. Alistair Crane can be considered to epitomize the ideal of the true Crane; other characters frequently compare Cranes who act in the manner of a true Crane to Alistair. Alistair himself takes pride in being a true Crane, and his only descendant that he considers to possess these same qualities is his beloved granddaughter and favorite family member, Fancy; somewhat ironically, Fancy is one of the few Cranes to abstain from the nefarious and deceitful schemes for which her family is infamous.

Crane Industries, a publicly traded company, was founded by Alistair Crane. The company is the sole source of the family's revenue and is primarily involved in fishing. However, in addition to Crane Fisheries and the Crane Cannery, Crane Industries also produces a fashion line, Crane Couture, and has an extensive security and surveillance department. Crane Industries is based in Crane Tower in Harmony, and the company also owns the Crane Recording Studio, as well as the Book Café.

Alistair Crane serves as CEO of the company until he falls into a coma in 2006; when he resurfaces the following year, he is unable to take control of the company back because he is wanted for his actions in Rome and for the murder of his son, Chad. Alistair leaves Theresa, who had previously served as Vice President of the company in 2002, in charge of Crane, while Julian is the company's president.

Chad and Fox both work in the business division; Valerie serves as Chad's assistant, and then later Theresas's, whereas Kay becomes Fox's assistant after leaving the Crane Cannery. Alistair establishes Crane Couture for Fancy in 2005, although she leaves the company in 2006 to become a police officer in 2006. Sheridan briefly heads Crane's charitable division before Alistair fires her for giving money to Theresa in 2004; she later takes over Crane Couture after Fancy's departure and secures an accounting job for her husband, Chris. Other Crane employees include Jared Casey, who is also a business executive.

Ethan Winthrop serves as the company's legal counsel; he is to inherit the company upon Alistair's death until it is revealed that his biological father is Sam Bennett. Alistair later names Little Ethan his legal successor; however, according to Alistair's will, control of the company shall pass to Fancy, because Little Ethan is not Julian's biological son.

Due to Alistair's position as one of the most powerful and wealthy men in the world, the contents of his will frequently factor in significantly to the program's storylines. For many years, Julian is Alistair's heir apparent, but Alistair disinherits Julian in favor of Ethan in 2000 after he grows disgusted with his son's behavior. Ethan does not last long as the heir, however, and is quickly disowned later that year for breaking off his engagement to Gwen Hotchkiss in order to marry Theresa; the revelation that Ethan is Sam Bennett's son removes Ethan from Alistair's will completely.

After years of uncertainty, Alistair adopts his new wife Theresa's son with Julian, Little Ethan, and makes the nine-year-old his heir while disinheriting the rest of his family.[1] When Alistair falls into a coma in January 2006, and again when he is believed to have died in July of that year, Theresa, as his wife and Little Ethan's mother, takes over control of the Crane empire as a sort of regent. Upon further study of Alistair's will, however, Theresa discovers that, should it be revealed that Little Ethan was fathered by Ethan and not Julian, Little Ethan will be disinherited and Fancy will become the sole heiress to the Crane fortune.[2]

c. Vincent Clarkson (born 1974; given up for adoption)

Note: the letter "m" indicates a marriage, "a" an affair, "r" a rape, and "c" a child resulting from one of those unions.