Dartmouth Park is a district of north London in the London Borough of Camden, on the slope of the hill that rises up to Highgate from Kentish Town. 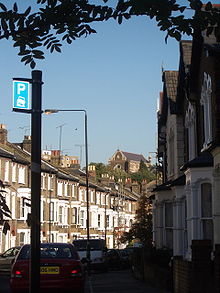 Dartmouth Park is named after the Earl of Dartmouth who bought the land in the middle of the 18th century. The 5th Earl of Dartmouth instigated some major house building in the late 19th century, and the area has continued to undergo development since that time.

The street named York Rise, which runs through the centre of Dartmouth Park, is in a slight valley which follows the course of the River Fleet, now underground. At the foot of York Rise the river crosses the railway tracks in a large iron pipe.

Most of the area consists of late nineteenth century terraced and semi-detached houses, with a few more recent buildings. The local church is St Mary Brookfield, designed by William Butterfield and opened in 1875. It is red brick with contrasting yellow and blue brick patterns.

Although the name designates a district and not a park per se, there is a small but attractive park off Dartmouth Park Hill, now named 'Dartmouth Park'. Although much of it is taken up by a reservoir tank, there is also a children's playground and a green bank with spectacular views of Central and East London.

Dartmouth Park is a quiet residential area with a mixture of residents, from young professionals and families through to retired couples. To the north lies the Holly Lodge Estate and then Highgate. Dartmouth Park is separated from Kentish Town to the south by the Gospel Oak to Barking railway line. The former park on the area covered what is now Waterlow Park and Highgate Cemetery.

and Ken Loach, the film director. 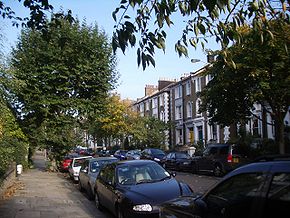