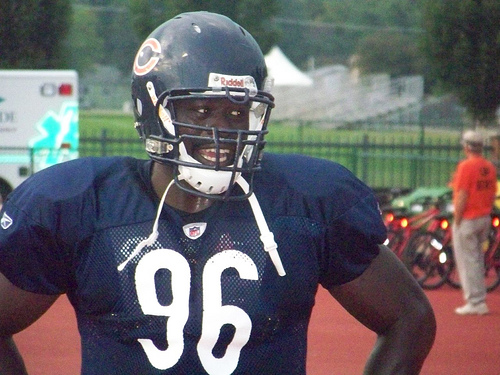 He attended University of Florida from 1998 to 2001. Brown is a member of the Zeta Kappa Chapter of Phi Beta Sigma Fraternity at the University of Florida. During his career, he was named an All-American, he was a three-time first-team All SEC, and a semifinalist and finalist.

Brown saw action at outside linebacker in 1998 as a true freshman, recording 10 tackles with two sacks and three tackles for a loss (TFLs). He was the backup to All-American .

In 2000, Brown was a consensus second-team All-American and was once again one of the 12 semi-finalists for the Lombardi Award. Brown started every game at right defensive end, recording 50 tackles with 10.5 sacks, 14 TFLs and four passes defended, while forcing a fumble and blocking three kicks.

In his senior season of 2001, Brown was a consensus All-America, being named first-team by virtually all collegiate polls. He was also the 2001 SEC Defensive Player of the Year and one of the four finalists for the Lombardi Award. Brown was one of five finalists of the [http://www.gatorzone.com/football/media/2006/pdf/143-146.pdf] after recording 45 tackles and a career-best 13 sacks. Brown was also voted the SEC Defensive Player-of-the-Year.

In his career, Brown totaled 161 tackles with 47 total stops behind the line of scrimmage (sixth-best total in school history) and holds the school record of 33 career sacks.

Brown became a starter in his rookie season, logging 2.5 sacks in nine starts at defensive end. Brown has recorded 29 sacks since then as the starting right defensive end. In a week nine contest, on November 7, 2004, versus the , Brown recorded a career-high 4 sacks to go along with eight tackles, including six solos stops. He also forced a fumble and batted down a pass at the line of scrimmage. For his efforts Brown was named the NFL Defensive Player of the Week by . Noted for playing the run very well, Brown was a Pro Bowl alternate in both 2005 and 2006.

So far in his NFL career, Brown has played 96 games and has 31.5 career sacks. He has also picked off four passes (two in 2006) and deflected 33 passes, an unusually high number for a defensive end.